An old friend just posted this on Facebook and I was so thrilled to see it.
I think it was the second picture ever taken of Blake and me.  We were at Luchenbach, Texas......circa July 1999.
We were so young and naive! 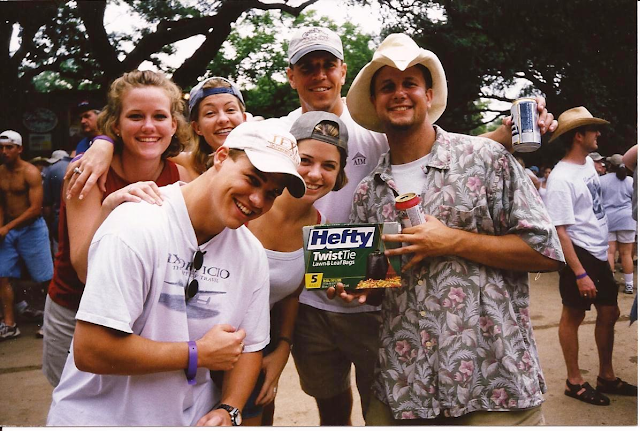 Awesome memories.
Just showed it to Carter and he said,
"Oh my Gawd!  Dad is so skinny!  And, you look slightly va-va-voomish.  You know, because of the mascara.  I'm not saying you are NOW!"
Think that was a direct hit on both of us.
Thanks, Carter.

LOVE it. Look at Millie...'scuse me, Amelia in the back ground! Black looks SO YOUNG!! And, you look adorable. Can't wait to see ya. Your stalker. Kelly

What does he know about va va voom? Ah, to be young, and drunk and unknowing... Takes me back.

Loved Carter's take on it! Just wait, his time's coming!

Oh the story behind this one. Because I'm sure there is a story behind every photo and even more that don't have photos. : )

omg i love this picture! i must say, i can't dispute carter's comment (: funny kid.

Old pictures remind me that I'm getting old. I don't like this business at all. I will be getting a face lift in a few years. I have no choice. I will cling to my youth for as long as I can, damn it.

SO CUTE! I love looking at old pictures! We were ALL skinnier back then.

cute pic - and I love how Carter uses my Va-va-voom terminology. :-)

Babies is right! And July 1999 - wow, I had already been married for 6 months. Did I really look that young when I got married? Holy cow.

And Carter's quote? Va-va-voomish? God he's such a cool kid.