You Knew It Would Be Good

And, we're only on day 4!
Jack, Jack, Jack.
I could write books on this child.  Someone might one day, actually.
Some funny anecdotes from Kindergarten thus far:
1.  Upon leaving the courtyard, each child must give the teacher a high-five.  This way, she knows each child gets to where he needs to be - picked up, in an after school program or on the bus.
On day 3, Jack fell down while high-fiving and had to go to the nurse because he was bleeding.
That's a rather large band aid, don't you think? 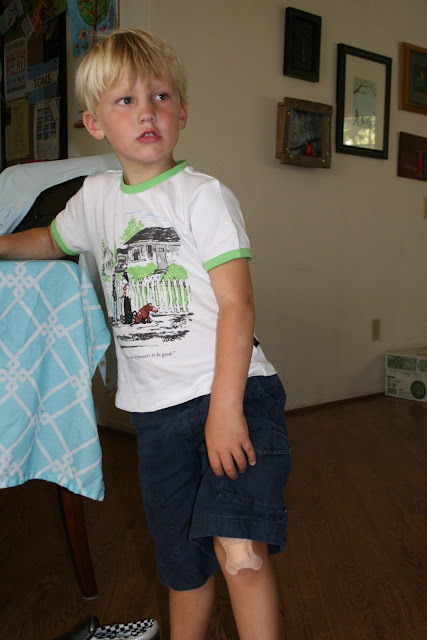 ﻿2.  Each day, I pick up the boys and ask them how their days went.  Jack's trademark answer is, "Not good."  (in his best Eeyore voice possible)
I inquire why......his usual response is, "The teachers were being bad."
I know from preschool and from babysitters that if I hear this, it means JACK was 'being bad' and therefore had some disciplinary action taken against him.
This doesn't mean that he had to necessarily visit the "Think About It" chair.  It can be as simple as someone redirecting him.  Jack reports all indiscretions.
It's going to be a long year, folks.
3.  He LOVES to buy lunch.  He's taken his lunch twice and he's bought lunch twice.  If you know Jack, you know he's a picky eater.  I'm confident he ate on Friday because it was pizza day.  I encouraged him to buy yesterday because I thought it was chicken nugget day.....and this is one of the few lunches Jack might eat.  I must have misread the calendar because when I asked what he ate, he told me "Oh, just chips and a cookie.  And, chocowate milk!"
Fantastic.
4.  When asked if he made new friends, he always replies, "Yes, Mom.  Ricardo is my friend.  I told you dat."
Ricardo is the only child so far to sit in the "Think About It" chair.
I think this friendship has success written all over it.
When I inquire as to why he likes Ricardo, he tells me, "Because of his shiny shirt on day one!"
My sweet Jackie.  He makes life interesting. 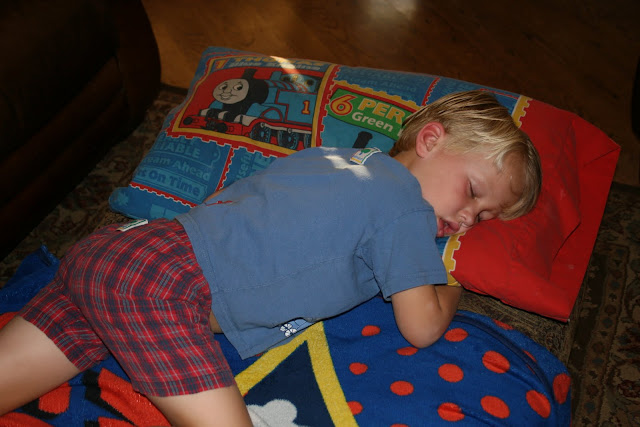 The good news is that all of this excitement has put him in bed each night before 6:00pm.  Lainey, too.
I can handle that.
Gives me time to regroup after all of this Kindergarten excitement.

BAHAWHAW! That's too cute! Love that last picture of him sleeping :)

Successful friendships are key! Reminds me of Mr. X Chatty befriended in Kindergarten and had to undfriend! Good luck!!

Sounds like you are going to have alot to blog about this year:)

So funny! This year is going to be FUN for everyone. I can't wait to hear more about how he is doing.

That is so sweet! Ricardo sounds like a handful though- better watch out for that one ! LOL!

Hilarious!!!! I love the concept of a "Think About It" chair . . . ah, euphemisms. :) I want to hear more about this Ricardo--he sounds like a funny little fellow, too!

Oh how I loved this post!! That kid is hysterical!!! Sophie is going to be an interesting one when she starts too. I see her ending up in the chair a lot as well. Her first night at 3 year old choir she already had to sit with a helper. Said the girl next to her kept making a noise and wouldn't stop. My guess she yelled at her in her tough voice and it didn't go over so well. Ahhhhh... kids. They make life so much more interesting!

Okay, let me just tell you, he is awesome. Jack, you rock! Hahaha!

Oh my word! He is such a silly kid! Every day is adventure with him! Cute pictures!

He is such a funny kid....shiny shirts!! Kindergarten is the best. Oh--and I am SOOOOO jealous your kids are going to bed so early.

Oh please please please write a book about Jack. I would read it over and over again. Until then, I shall keep coming back to your blog :)

Also... perhaps you should get Jack a shiny shirt. Then he and Ricardo can be twins.