Hello, peeps.
All ready for Christmas?  Me, neither.  But, I've finally caught up and am feeling less stressed.  Just a few more things on my list.......and we'll be in good shape!
On to the scoop......
Carter started Basketball recently and his team is AWESOME.  Last year, Carter was AWESOME.....his team was not.  And, I don't mean for a second the kids weren't good......our coach was not.  He had some personal problems that left us coach-less mid-season and then the kids lost interest.  Long story. Anyway, this year, his coaches are absolutely fantastic. The boys have their own warm up jackets, custom embroidered due to a team sponsor.  Carter is learning to play as a team, which he didn't get much of his first year.
So, we're thrilled! 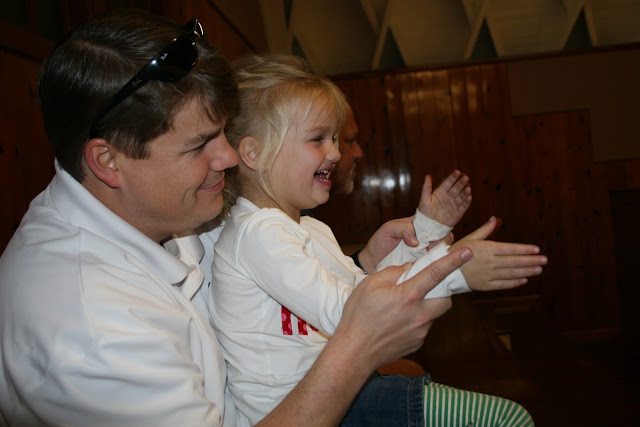 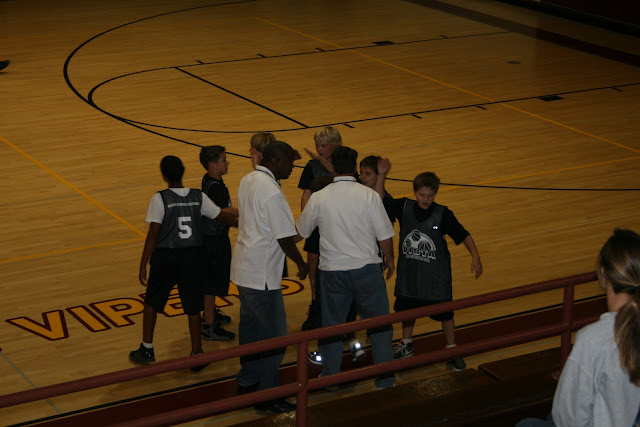 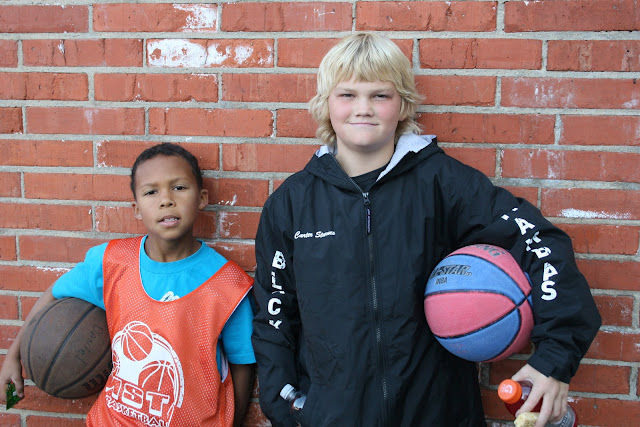 We had my boss and fam over a week or so ago to try on ski clothes and gear for their trip to Mammoth.  I can't wait to go to Mammoth.  Fabulous skiing.
Melissa doesn't ski.  She prefers to sit in the lodge, looking cute, with a glass of wine and a book.
I like that, too, but the mountains even more! 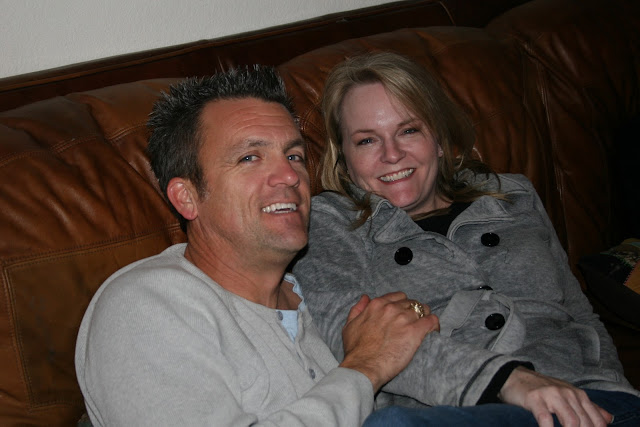 Finn has unwrapped more presents than the little ones and that is quite an accomplishment in this house. 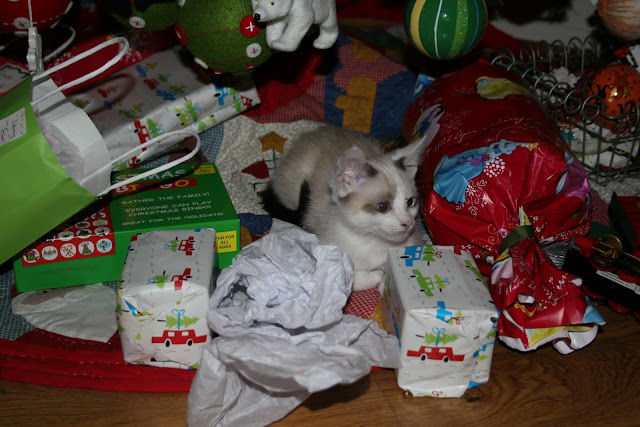 She sleeps in the sink of one of two bathrooms in this tiny house.  She's too young to put in the garage like Batman, so we had to find a small room and don't have that many options.  Blake is thrilled about the arrangement.
I often go in to see her sleeping with one of Lainey's babies.  Cute.  She loves the warmth from the lamp, too.  Still so young. 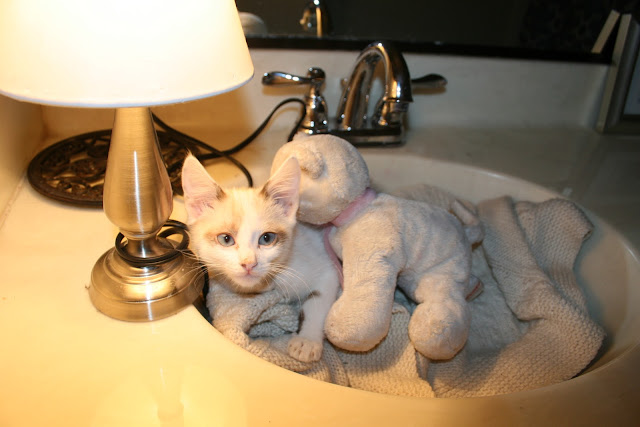 Our sweet friend, Cailyn, turned 3 recently.  Their elf dressed up for the occasion.
Allison's getting pretty kooky and I love it! 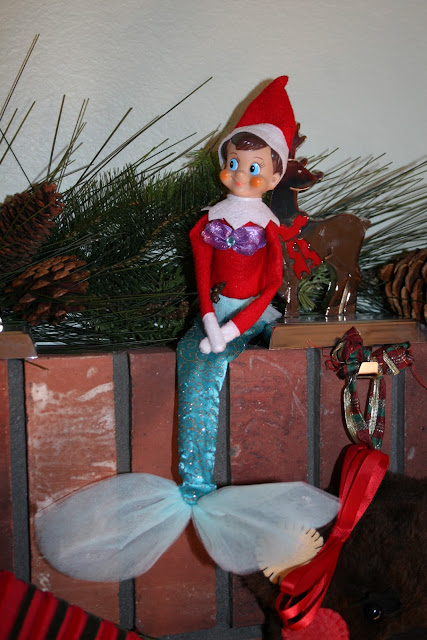 She has mad skillz when it comes to cakes. It's her thing.  Pretty cool. 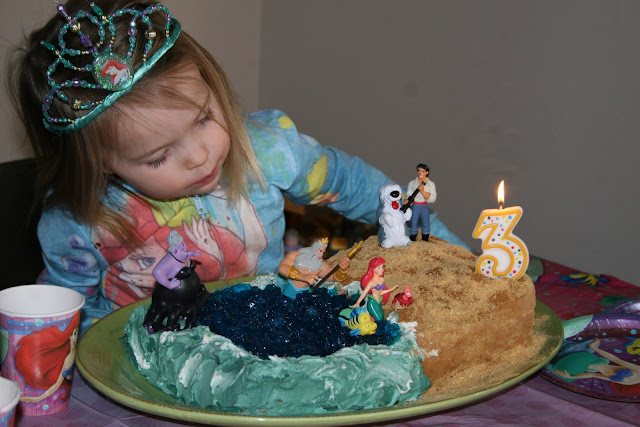 The party was tons of fun and Jack, last in line because he was the oldest, wacked the head off Ariel, much to everyone's delight, because she was a "piata" (pinata).  He was so proud of himself.
The crew.  It was a wild bunch. 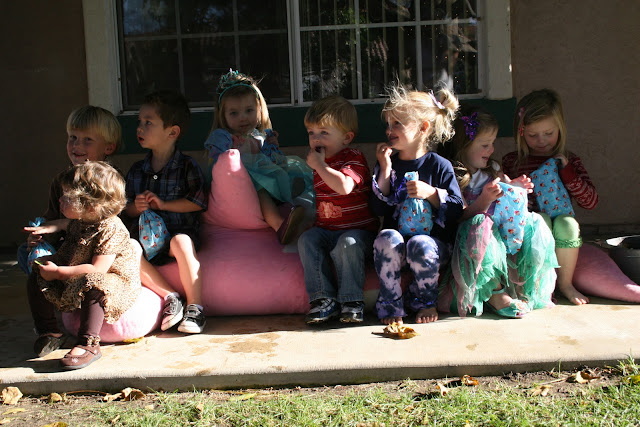 ﻿
Our escape plans came to a screeching halt today because of the rain.  Allison, nor I, are smart enough to check the weather when making travel arrangements.  We're more apt to concentrate on things like The Vacation Fairy, whether we're bringing one elf or two, if we can hide him at Disneyland inconspicuously so that the kids think he followed us there, etc, etc.
So, in short, we've changed our trip to leave tomorrow, pending the ability to secure a hotel room.
Cross your fingers!

LOVE Mammoth! I use to go there all the time when I lived out West. My friend's parents have a condo there so that made it even better!!
No words for that Elf.. shenanigans!

Oh no! I'm sitting here enjoying the rain. That sucks that it ruined your plans. Hopefully you guys can go tomorrow.

When in the world do the kids go to school b/c I feel like they spend more time at Disney Land. Almost called it World. Glad I caught it cause I'm sure I would have been corrected.

School actually falls in line AFTER Disneyland, surfing and the beach here in California, as far as priorities go.

Yeah Carter and his basketball. Team playing and good coaching is so important.

I'm confused, are you going to Mammoth, is you boss going, or are y'all both going?

That elf business is funny. I am going to put that idea in my pocket.

Glad you are less stressed, enjoy your time at Disney, can;t wait to see if the Elves make the trip!

that little kitty? adorable!
have fun on your big escape :-)!

Love how you have your priorities straight!

P.S. Have you read Coco's Nutcracker post? I thought I was going to pee my pants.....hilarious!

Hope you get a hotel!! And Melissa is my kind of woman. If I ever go skiing, I plan to sit in the hot tub and drink wine the whole time. I have NO desire to ski. In my defense, the last time I went, I ended up in the emergency room and I hate to be cold. I have never been to Colorado to ski before so maybe that would be different. I hear it is awesome!

Did you notice how Finn looks a bit "wild-eyed" sitting under that tre? Trouble. Merry Christmas!

LOVE the pic of Finn under the tree... HOLY. CUTENESS.

And Carter?!?!? How handsome is he getting? Watch out ladies of Southern California... :)

You crack me up as always - love getting a good chuckle from you daily! I think our elf on the shelf needs to wear Ariel's costume tonight. Thanks for the idea! Where do you get this stuff?!