First, let's start with Blake's proudest parenting moment as of yet:

While waiting for Carter's basketball game to start on Saturday, he overheard the opposing team's coach say:

"The only kid on this team that can play is named Carter. Blonde hair. #5. Don't let him near the basket and watch out for fast breaks and lay ups."

Cue Blake slobbering all over himself with pride.

In other news, Lainey ain't got no game. Example: 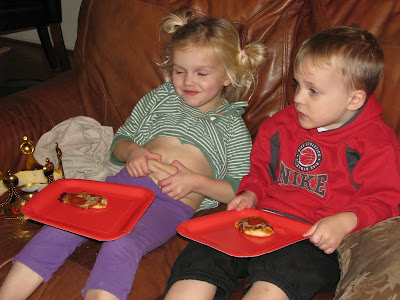 This was her first attempt at picking up one of Mike's boys. You'll see she succeeded later on in this post. Nicholas was not interested.

That move always worked for me, though? Hmmmm......

Mike and Holly's boys at our house + Jack. There is simply no way for our families to get together and it not end in some massacre of our house or theirs. Always fun, though! 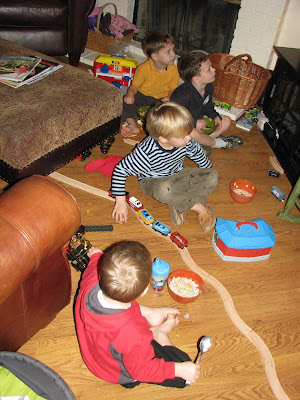 We see a lot of this these days. Lainey playing Preschool, handing out big jobs like "fish beater" and "line leader".

But, looks who is in time-out. 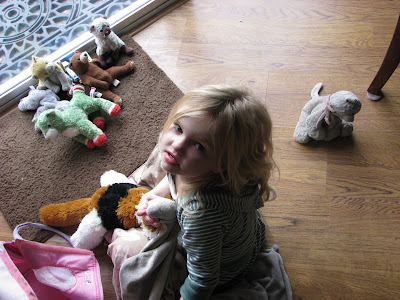 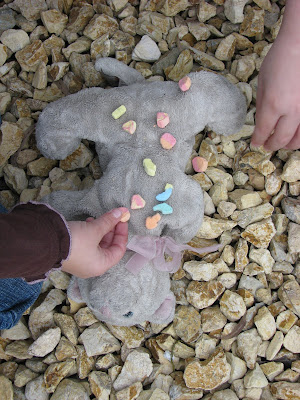 These two just won't give her a break. 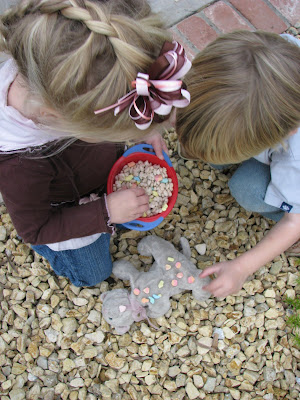 Have yall seen these? Mae Mae got them for us for Christmas. So fun! 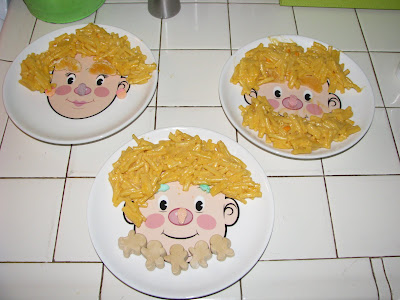 I took my usual position as "Mamarazzi", as Shannon calls me, at Share Day. The letter was J. As always, my kids stretched that as far as they could and came up with this:

It's a dinosaur umbrella with his name painted on it. (J for Jack.) Alisha sent it to him. He ADORES it. 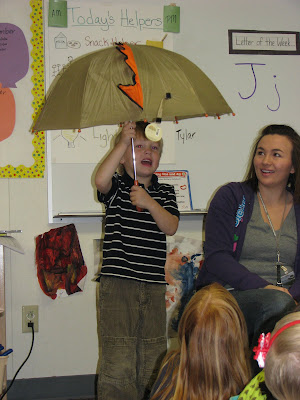 Lainey blew her turn by calling this kitty, "Daddy Kitty", as he's called at home. Carter convinced her to change the name to "Jungle Kitty" for the 'J' share. But, she forgot. 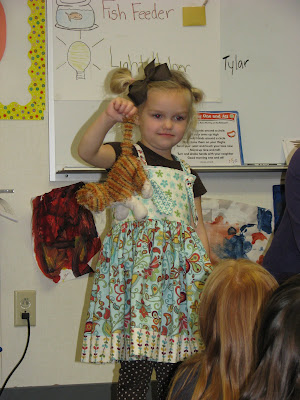 Speaking of Laine, we spent an extra 10 minutes in Walmart recently because she freaked out over this ice cream carton. "Mom!!!!!!!!!!!!! It lost her family! Put her back!!!!"

I tried to rush right by it, but she convinced me to return this random item - incorrectly placed here by someone else - to its home. 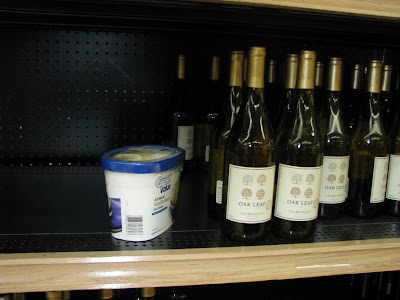 We watched the LSU Tigers beat the Aggies at Mike and Holly's house. Laine is in full baby mode here since a real live baby is always present. 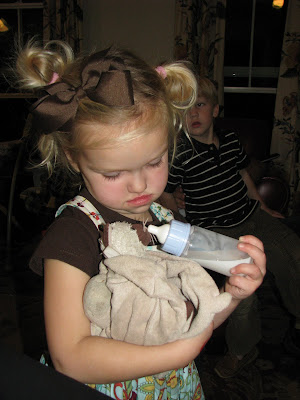 Jack just hangs with the boys. 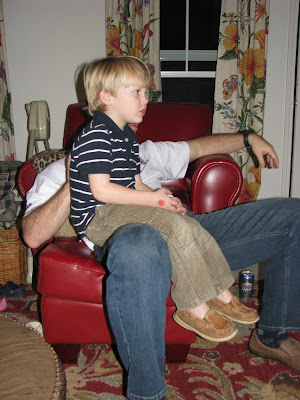 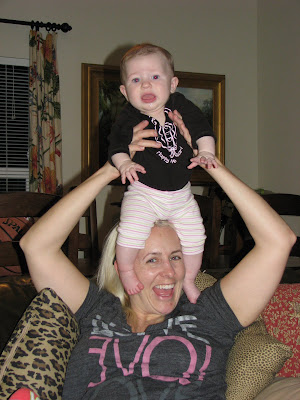 Love this look from Mike. Giving me his trademark, "What in the hell are you talking about?" expression. I've seen it before. Doesn't phase me. 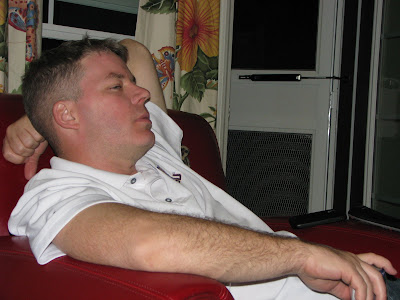 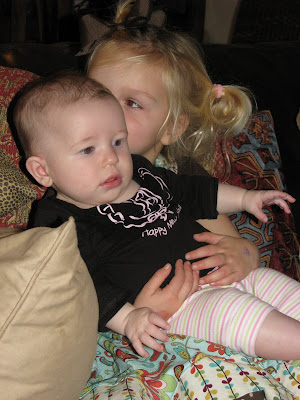 The group joined us the next morning for Carter's basketball game. We are quite the motley crew, no? 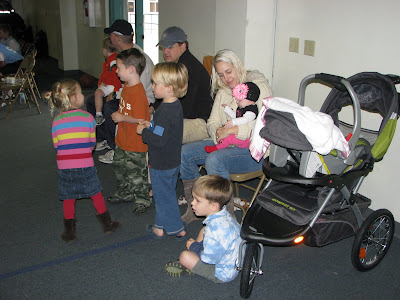 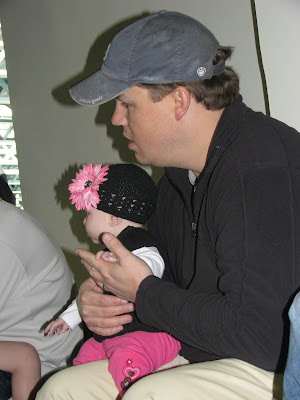 Did I mention Carter cut off all his hair? ALL of it. He looks cute. 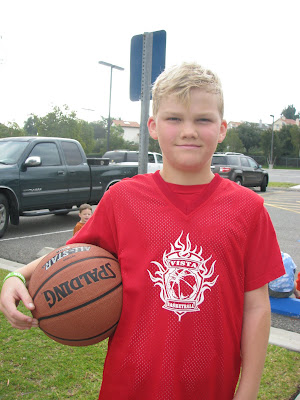 Remember before when I said Lainey struck out with Nicholas? Well, she made a little progress with Michael. 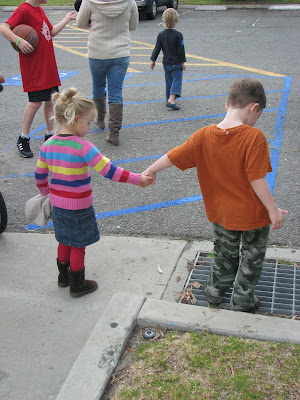 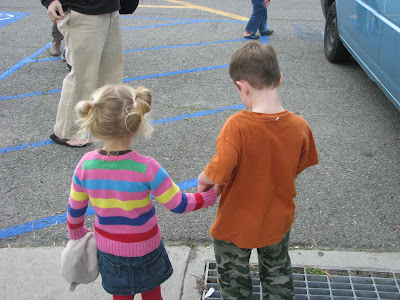 *Basketball games - two of them!

*Bachelor! (really should be at the top of the list)

Man, romance starts so young these days. M will not be ok with this. He insists that Emma be 18 before we let her date.

I can see why that would be a proud mom-moment re: Carter!
Loved this post and the pictures. Baby-hat could totally be a new thing. Patent it quick!

Work? Did you get a job? Great scoop by the way, love how kids are so honest about everything (the J and the ice cream). Love Carter's new hair cut and way to make a statement on the court!

Way to go Carter!!! I can see the smile on Blake's face ... such a great moment for him!

Love the J items for preschool. So funny poor Lainey forgot that she was going to rename her kitty :). Way to nail it Jack!

I assume you mean Jack and Lainey are attending a princess party since it's not anywhere close to their birthdays, right?

Carter's such a stud!

You mean squishing your belly doesn't attract all of the boys?

Ainsley ALWAYS has to put misplaced products back with their "family". We can't ever leave one "alone". EVER!

Jack and Lainey are ATTENDING a princess party. I'm not hosting it. Like Jack would go for that.

Way to go Carter! That is definitely a proud moment when the other team is afraid of your kid.

Being a line leader at preschool is one of the most responsible jobs to have. Being the line leader ranks up there with having the snack bucket!

can't believe carter cut his hair! and I bet you are equally as proud as B over that comment

I bet Blake was grinning from ear to ear after overhearing that comment. So awesome!!

I'm starting to feel a little sorry for Meow Meow. Just a little.

That is awesome about Carter!! I was wondering about the princess party too, but see that you cleared that up!

Love that Jack liked his gift.

Love LC's trick to pick up the dudes.

I don't know what was wrong with that Nicholas character...I thought Lainey's move was pretty alluring myself!

And speaking of young love, Rylee is so excited for them to come to her party this weekend! She told me today on the way to preschool "Mom, I'm going to give Jack a hug and a kiss!" I asked when and she told me at her party...it will either be Jack's lucky day or he will be traumatized! (However, considering how he professes his love for Rylee on a regular basis, I'm guessing the former?) Be ready for that one, Mamarazzi!

Which reminds me, I need to get with it and remember sharing time on Fridays so Rylee can take something...does that mean that it's letter K this week?

I was laughing so hard at that pic of Lainey that I thought I was going to either wake up the kids, go into a coughing fit (thanks to the cold I can't beat) or both! I think it took me two minutes just to finally quit and be able to move on to the rest of the post!

Carter, congrats on being so awesome!!! Your mom needs to give us more warning when you decide to shave your head!!!! If I actually knew you I would have walked right past you and never known it. Love it!

Hope you guys have a great week andit sounds like you will definitely be busy, so enjoy!!

Stomach scrunching always works with the dudes. Nicholas is crazy not to fall in love with that little belly.
Meow Meow in time out? Not surprising.
I love the Mike & Holly crew! Blake- get to baby makin. You know you want to replicate one of the babies you already have. Well, at least one of them. And it's not Batman, FYI.
Shan- nice dub as Mamrazzi. So legit.
Love Carter's hair & bball skillz! I just texted him that, so you don't need to tell him ;)

Oooo another baby?? DO IT! I mean...if Mike wants one, it would only be right.

But HIP-HIP-HORRAY for Carter! Best man on the team! *High Five*

You make me laugh :)