Carlsbad is one of my favorite San Diego suburbs and likely where we'll buy a house eventually. It has everything........great schools, a darling seaside community, fabulous shopping, Legoland, and more.

Since moving here, we've been rather fond of one beach in particular in Oceanside. Breakwater Beach is in between the harbor and the pier.......so both are in reach and it's super close to where we live. Recently, I've forced myself to research more and see what else is nearby.

We ventured out to the Carlsbad state beaches after school one day. So easy to do......pick up kids with picnic packed and head west 'til you hit water. Minutes away. 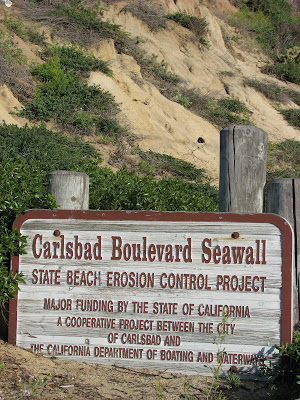 Carlsbad is unique in that it has a seawall. My only experience with such is in Galveston, TX. It was nice to take advantage of the 4 mile walk. Clean and easy to navigate with plenty to see. 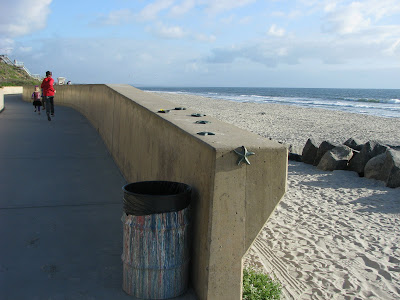 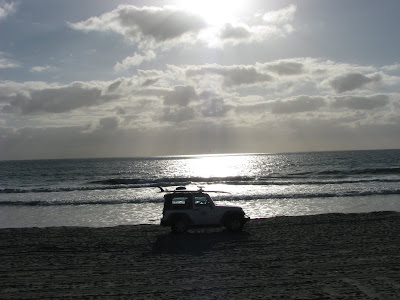 Lots of pretty brush and several critters for us to spy on. 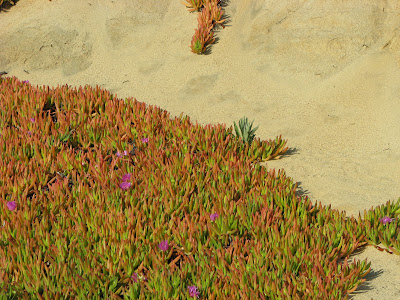 We walked and walked and walked.......until we found this inlet. Reminded me of snorkeling with Carter in the Yal Kul Lagoon in Akumal.......we started inland and ended up swimming into the ocean. Much calmer waters than what you see here, of course. 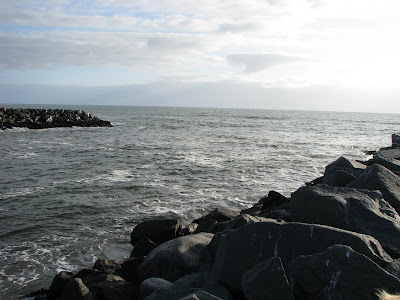 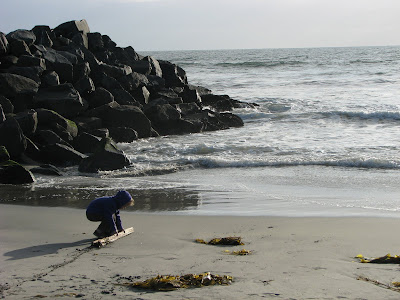 Pushing approximately 80 pounds of kid on the sand was a fantastic workout. We walked the length back on the beach. 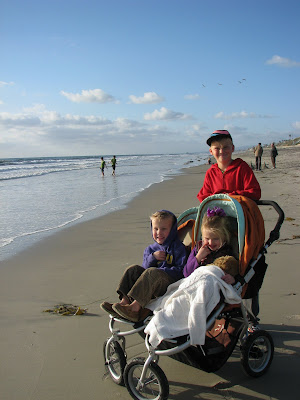 Once we were back closer to the Carlsbad Village, we settled in for a dinner picnic. The kids found this "movie theater" carved out in the sand. Do you see it? 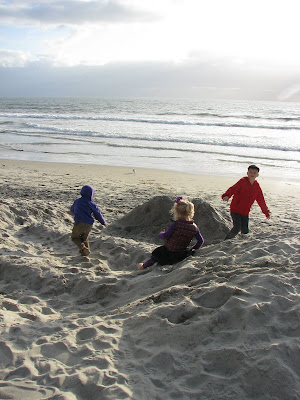 Cute little punks helping each other out. Sometimes, when they're not pinching, hitting or yelling......they can be quite sweet to each other. 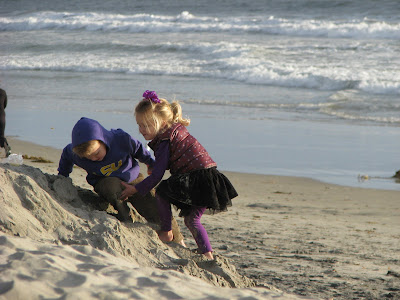 Carter was on the blanket with me and we noticed an unusual amount of seagulls stalking the area. We're used to this.......they can see the Starnes family pull up in the parking lot and know they're going to find plenty of scraps once we're eventually gone. However, the dozens you can't see overhead in this shot below concerned us. 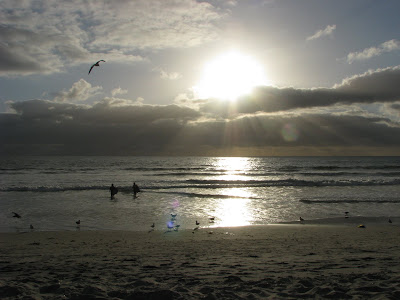 Of course it did.

Not sure if it was a direct hit while in her hands or if she put it down to work on the "movie theater". But, the sandwich was gone. 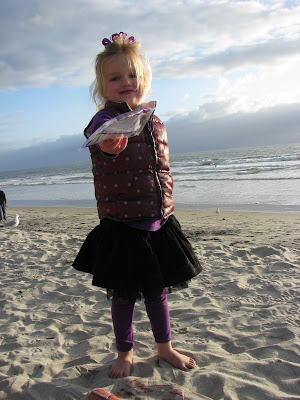 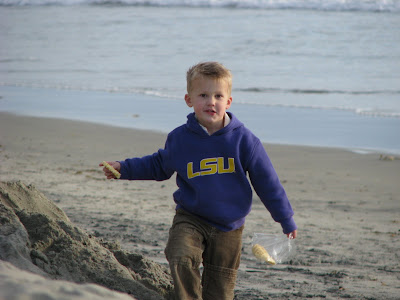 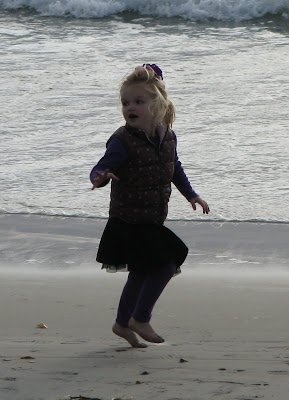 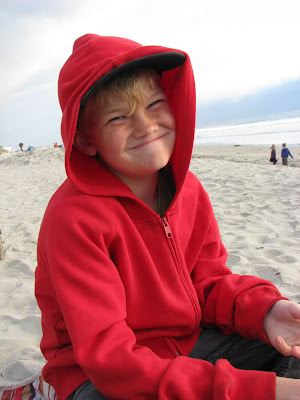 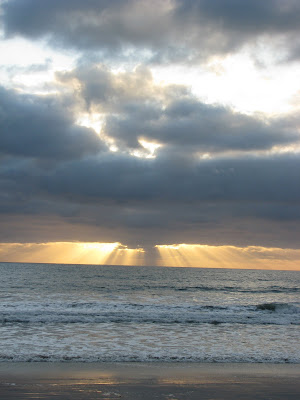 See those little birds skimming the water? They're not so little. They're actually massive pelicans looking for dinner. Should have been here earlier. 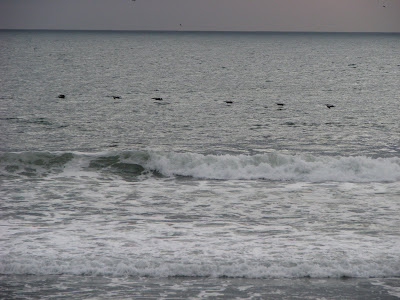 Overall, it was a great beach. We took Blake back a few days later and he liked it, too. It was chilly, though.

Next up is Del Mar.......which had an entirely different view (and parking fee!).

Back soon, peeps. Holly is coming over soon for PW's Chicken Spaghetti and we're going to tackle the King Cake. We know how to party, yall.

Email ThisBlogThis!Share to TwitterShare to FacebookShare to Pinterest
Labels: California

I don't do a lot of beach exploring because of the dog. We always go to Dog Beach at Ocean Beach. It helps that I love it there. Plus, Sunset Cliffs are close by so if we are there in the late afternoon we can watch an amazing sunset from the cliffs. The North county beaches are lovely but too far for us to drive to.

Wow, gorgeous! I am jealous!! Loving the "movie theater" and I have a plain waffle eater too, but she is my normal child...we might be in trouble!

Beautiful pictures!! Looks like you guys have a nice place to escape to! So perfect that you can go to the beach whenever you want! Love it!!

What a crappy job...beach exploring! We often have breakfast for dinner, which means waffles (ok, so it's really because I don't want to cook)

It looks like another fun day at the beach! We love to picnic too!

Love the pic of Carter. Wonder where he gets his smart assness?

Can't wait to check out the beaches in San Diego! Soon, so soon!!!! Yay!

All I can say is I'm super jealous. You have the bestest life ever.

I LOVE PW's chicken spaghetti. I can tear it up.

Love Del Mar - can't wait to see your pics. Carslbad is so pretty too and a great place for a family!! I can't even begin to imagine the amount of sand in your car, clothes, stroller, house! UGH - I love the beach so much but hate the extra sand!!

Picnics on the beach every week - love that!! So much fun for you and the kids.

I would've been running for the car if I'd seen all those seagulls - no m'am, that's not my idea of a relaxing evening. Poor Lainey - hope she got a new sammich.

Just a tip-pick up a State Park pass. It's well worth the money and makes beach going so much easier. Especially with young kids who can't hike for miles from the car. An added bonus is that you can use it for exploring Torrey Pines, beaches further north, and even trips east to Anza Borrega and Idyllwild.

What a fabulous way to create memories...beach after school! Lovely :)

I would love to live so close to the beach!!

Actually the waffle thing is not weird at all to me. We leave the house with a plain waffle in a baggie all the time, sometimes it's a chocolate chip waffle. That's how Cason eats them too.

Yeah for Carlsbad....we love it, too. Hope you end up buying there because it is so close to me. Del Mar is one of our favorites, but I have had MANY parking tickets there. Paid parking is annoying.

Love Carlsbad! We go every weekend pretty much :) It's so beautiful!