My Man Is More Annoying Than Yours And Here Is Why

It's hard for me to write this post because Blake and I are so giddy in love right now.

He will fall asleep on the sofa before he'll leave me in the living room to go to bed. I thought he was going to cry last night when I suggested I go to a movie by myself. I'm making lots of homemade dinners and baked goods for the office. Carter is totally grossed out by all of the kisses and hugs. All due to our separation......we're so happy to be together again! It's blissful. I love it.

That being said.......and I do love him dearly.....more today than ever......he still qualifies as Most Annoying Husband Ever.

Because, I ran an errand a few days ago in his car. Needed to go to Target for a rather large shopping trip and it was raining. I'm terrified of hail damage on my car and our area of the country sees some wicked storms. So, I ask if I can take his and he says I won't be able to fit much in it.

BECAUSE THERE IS A COFFEE TABLE IN THE BACK SEAT FROM THE APARTMENT HE MOVED OUT OF ON APRIL 24th. 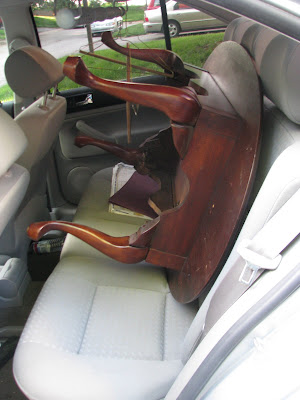 He's been driving to work and home with this piece of furniture in the back seat of his car for weeks. WEEKS, people. Why is it not in his trunk? Because that is stuffed full of his bedding and other items from his apartment.

This is on my list, too.....no, we don't live in Texas and we didn't just relocate from Texas. We were in Colorado for over two and a half years. Clearly, there was not an opportunity to remove these stickers. And, my guess is that our lives here in Kansas will deter him from it as well. 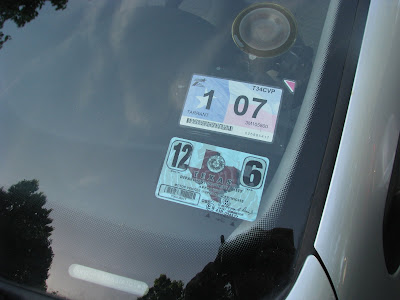 I have several other qualifying factors that prove my husband is the most annoying ever. SEVERAL.

All I'm saying is thank God he looks like this: 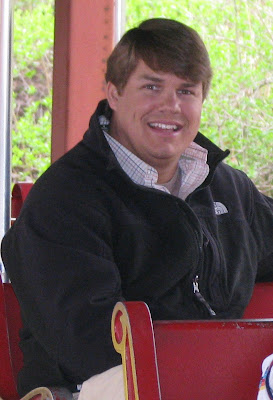 Blake's good looks have gotten him far in life and staying married to me is highest on that list.

Think yours is more annoying? Prove it.

****I showed this to Blake before publishing it because I wanted his approval, of course. He said that the furniture in the back seat was actually part of a hidden agenda. He's hoping for death via clawfoot coffee table rather than a long life full of Casey. Hmmm......

Email ThisBlogThis!Share to TwitterShare to FacebookShare to Pinterest
Labels: Blake and Casey

What is wrong with our husbands? You know my husband is the most annoying EVER but we will allow Blake to take his title for a while... at least until that table gets removed! DORK.

Sadly today I can't think of anything to top that ... but I am sure I can come up with something in the next day or so!

I don't have a husband (yet)..but men do tend to procrastinate
My dad was always the worst! Brad thank goodness isn't so much.

Holy crap, that is really funny. And I am super surprizsed that you didn't notice this earlier. I thought you would have sniffed this out!

How to even respond to this one? I have already hung up on Mark this morning for being annoying and he is in New Jersey! He is annoying from across the country. Absence does not, apparently, make our hearts grow fonder-sad huh?! But you can have your bitch session and let him take the title today. Did you clean out his car for him?

Perhaps Adam and Blake were seperated at birth?

Adam has a cooler of beer in the back of his truck from last August. Also, I couldn't figure out were a bunch of his polos were and I looked in his hunting bad, in his truck, and there were about 8 of them.

And you should see our garage. I might need to take pictures.

Too funny! David stayed home and did laundry and yard work last night while I went out with friends so I'll save my bitch for another day! Y'all are so cute together!

Casey, this is too funny! (I'm back on my blog, and decided to re-vamp, only 2 posts so far!)
My Tonto could easily win Most Annoying Boyfriend. He doesn't even like American Idol, but always ends up on the couch next to me while I watch it. AND SINGS. THE WHOLE TIME. I was patient the first few times at the beginning of the season, but now I record it upstairs and watch it while he's gone. He also calls me "dude" when he's worked up about something one of his friends did (still trying to figure out that one), turns off my curling iron if it's on and I haven't used it yet (safety, great, but still annoying), unplugs my phone to charge his, and sets the perimeter alarm while I'm in the house if he's leaving. I set it off several times a week, and scares the crap out of me.
Love him! Not his habits ;)

This cracks me up! Why are guys so DUMB? Or is it just pure laziness? LOL! WAY TO GO BLAKE!

I think Ryan wrote this same post about me! He's the organized, clean freak, everything in it's place kind of person in the family. Now, I like things clean and organized, but I have been known to leave a shopping bag in my car for weeks and forget about it. I will never forget opening a drawer in his house when we were dating and seeing all of his shirts perfectly folded. I knew I had found my man!

OMG. SO FUNNY. I love the table. Well, Brian has continued to pay $15 a month on his Hawaiian Airlines Credit card so he can "use the air miles". He has no balance, doesn't use the card and WE MOVED AWAY FROM HAWAII IN 2005! What's worse, is that I can't cancel it because he got the dang card before we were married.

I am cracking-up right now. Casey, I love that you post this kind of stuff--real life, you have got to love it! My husband is an amazing craftsman. . . .he built our built-in, he does crown molding, he has even attempted to re-wire the lights in the yard. Sound annoying--no, but what is annoying is that he NEVER cleans-up his tools. He leaves various tools, including ladders, in the location of the project. What is most annoying is that after a few days, he will ask me if I will have time the next day to pick-up HIS tools! Seriously, it's not like I am picking up after two toddlers all day!

I just got back from an 8 day trip with Cason and my parents. Before I left I put a note on the fridge that read "Feed the fish and water the outside plants". Pretty self-explanatory, right? Well, I get back and half my plants and flowers are almost dead and his explanation was that I didn't tell him which plants to water. ?????

Then we couldn't find the fish for a moment and he asked me if it was dead. I'm thinking the fish didn't get fed on a regular basis as well.

You shouldn't have got me started because now I will go on and on. I drove Phillip's car the other day to the store and he told me I could not put anything in the trunk because it was completely full of plastic bags he is going to take to recycling. There has to be a years worth in there and I've been using canvas bags for months now, so I'm thinking he has not made it to the recycling center in at least a year.

Actually, I would be the one in my marriage keeping something in my car for that long. I am your hubs here. Now I know how my hubs feels.