People, I'm ready for summer!  Until then......a recap of Carter's last couple of weeks.
First, San Diego schools are awesome!  Carter has done so much this year.......too much to even recap.  His second spend-the-night field trip included a visit to The Star of India, the world's oldest "working" ship.  It's part of the Maritime Museum that we've been to before on vacation.

You can also see Caroline about to vomit on the bay tour and Lainey screaming her bratty little head off.  Don't miss it!

Here is a link to our 2006 visit.  Carter was 5 years old and Jack, 5 months.  Such a cute little punkin!  We met my cousin, Staci, there for a visit while on vacation.  Staci now has 2 punks of her own! 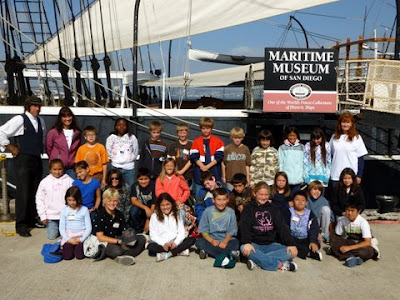 The kids were put to work with active participation like the sailors performed generations ago. 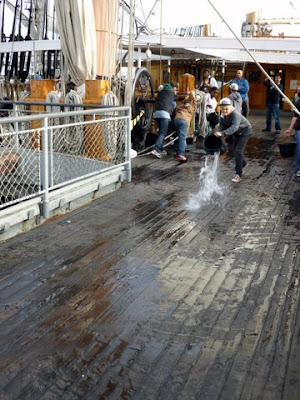 Carter was selected to be a "crew leader", which allowed him to lead his group in their responsibilities.  They ate 'authentic' food of the 1850's.  They learned how to sail.  They took turns standing watch.  Carter's group was 2:30am - 4:00am!  The kids were woken up to 'stear' the ship.  So cool. 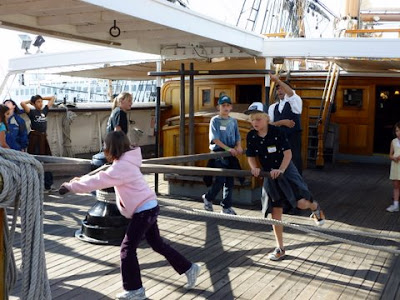 This boat is so beautiful......I'm actually surprised they allow children to sleep over on it.  Lots of activities to keep them busy. 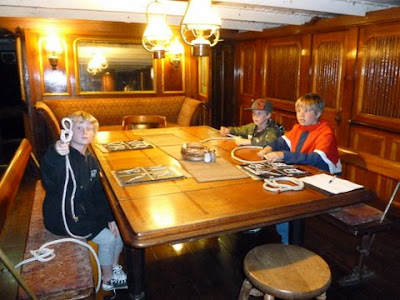 The school's 4th grade award ceremony was on Monday.  Parents were notified if our kids were getting an award.  Carter received one in Athletics.  See what he's wearing?  This is where Zoloft comes in for me.  Camo skinnies, a white tshirt and his "tuxedo" jacket (the suit coat he wore for his First Communion).
Lord give me strength. 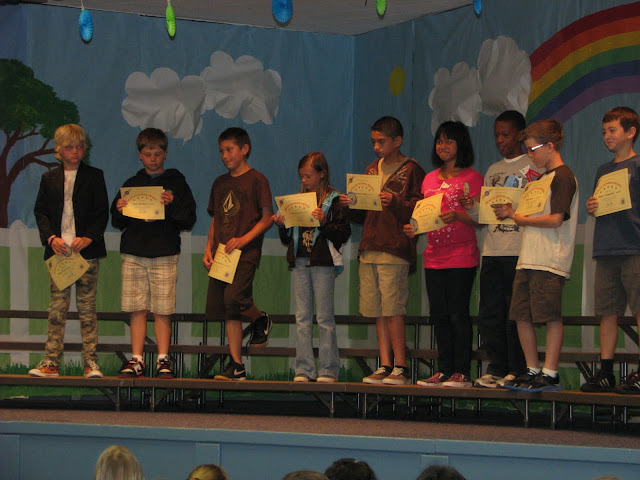 Look at our blondie.  Can't imagine how light his hair will be at the END of summer! 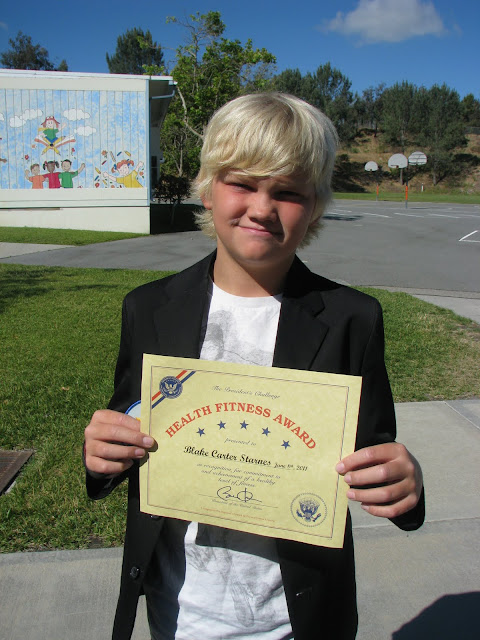 Yesterday, we attended the 4th Grade End of the Year BBQ.  Peeps, I can't say enough good things about this school.  They go above and beyond in so many ways. Parents paid $6 for the entire family to eat.  We contributed a couple of side dishes, too. 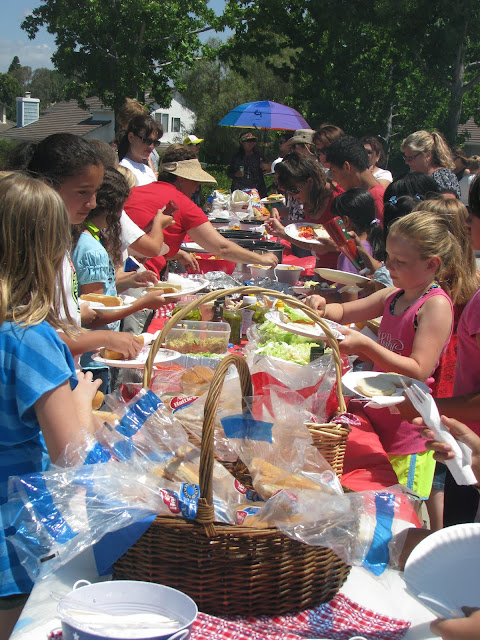 Kids played outside the entire day.  Nothing but fun.  Jack wore a tie to look handsome. 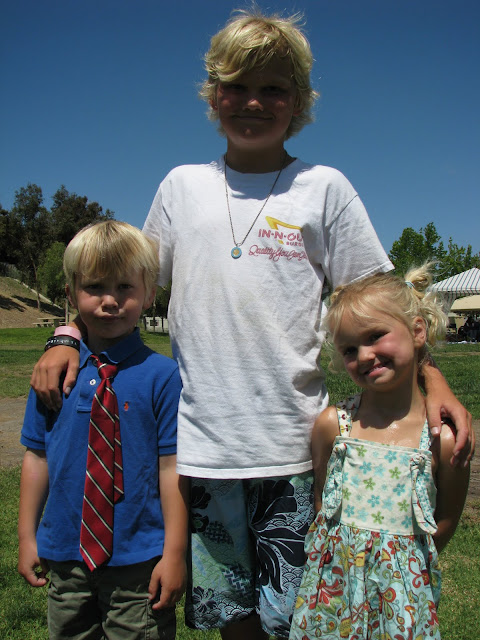 Little ones kept busy on the playground. 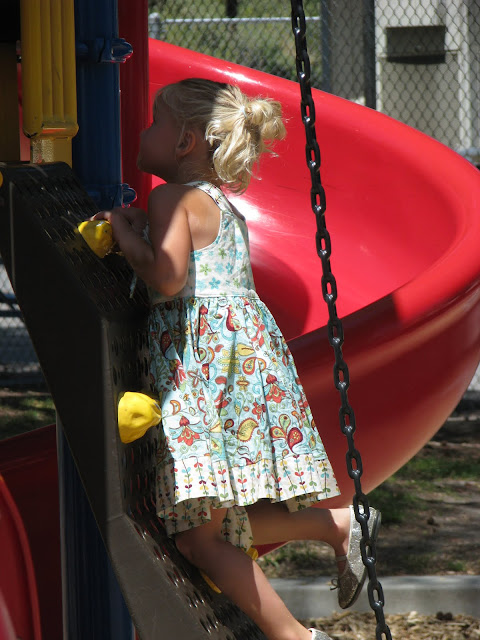 It was quite a production. 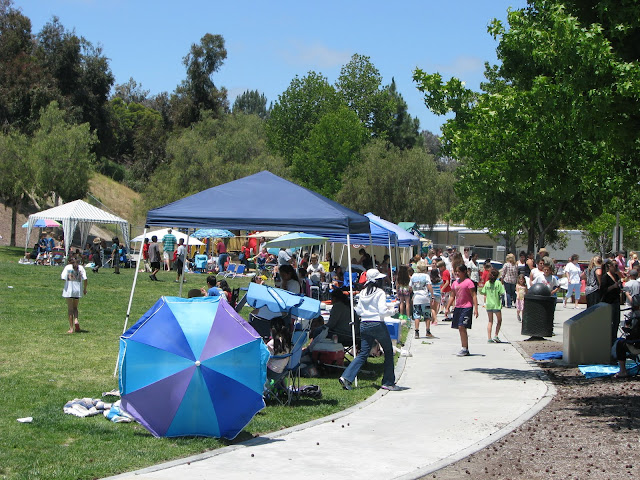 Jack had no problems sitting with the girls. 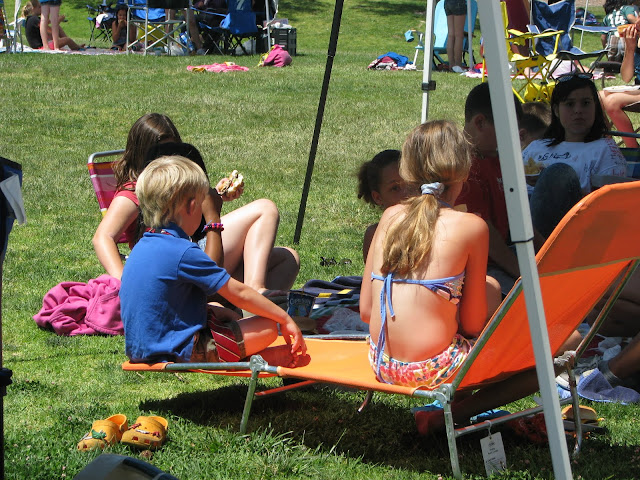 Lainey helped herself to some cake. 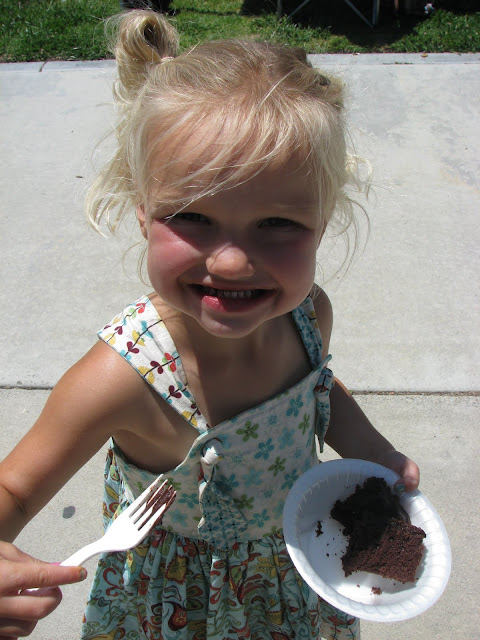 We left just in time for the water balloon/water gun battle. 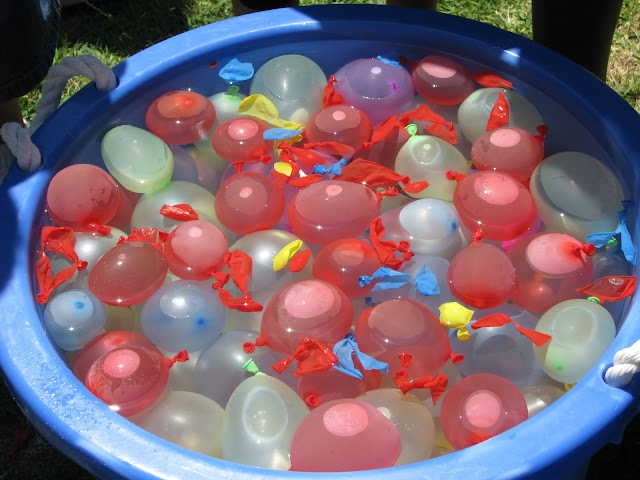 Today, the 4th graders will help take down the classroom.  And, we'll have a 5th grader this afternoon.
Finished our teacher gifts.  Hope they love them. 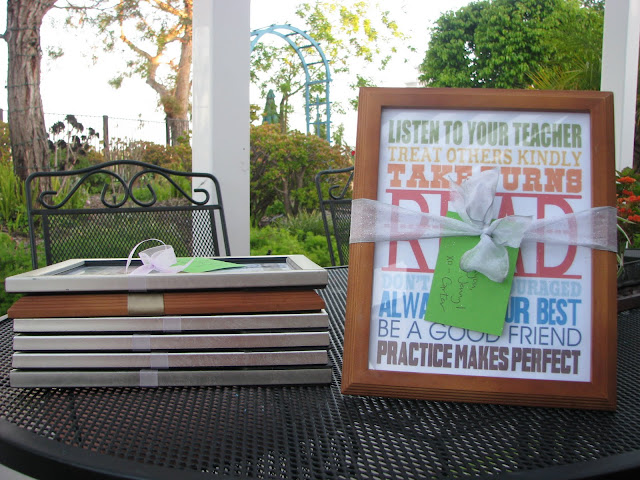 So......we're almost done!  Blake booked a hotel room for us next week in Anaheim.  Our Disneyland passes are 'blocked' for the summer.......until mid-August.......after Tuesday of next week.  So, we'll spend 2 days at the parks and enjoy some down time at the hotel.
Off to start a major summer prep in our house.  Shoes up, sandals out.  Need to stock the craft cabinet.  Organize summer clothes.  De-crap Straighten Lainey's room.  (She currently has a faux Christmas poinsettia that was pulled from the trash on her bedside table).
Later!
****Oh, one more thing.  I'm working on the new template to make viewing our blog on your phone more user-friendly.  Anyone else try this?  Seems like an easy application.....which, of course, means I can't figure it out!

Email ThisBlogThis!Share to TwitterShare to FacebookShare to Pinterest
Labels: School

Love Carter - even with his camo skinny jeans. Please let him know they don't wear those on hovercrafts!!

carter is so SO CAL!!!! what a great school!

End of the school year activities can get so crazy. Congrats to Carter. Loved his awards outfit.

You wouldn't catch me dead at Disneyland in the summer anyways. It's unbearably hot and super crowded. Enough to make it not fun at all. I just hope your Legoland passes don't have a summer block. That would suck!

I agree......the Disneyland passes actually help us weed out the days we wouldn't want to go, anyway.

Legoland passes - no black out dates!

I love Carter's outfit...for realz. Love kids that have their own tastes and he can pull off just about anything I think.

Currently making a summer poster board list with my kids. Filling months of time with kids isn't my specialty. Hopefully this will help.

I got excited about The Star of India. I thought he had eaten and enjoyed Indian food!!

Love the pic of Jack and the ladies.

I too gave both teachers that darling sign. Thanks by the way!!

Will you send Bram and In & Out teeshirt?

No, Coco, I won't. You're going to have to come here to visit and then I'll buy you and Bram one.

Those skinny jeans are a hoot! I think I would need drugs too!

Sounds like a great school! Such fun overnight trips!

Carter's style?? SOOOOOOO California. Loving it! And congrats to him on his award. Yay Carter! Can't believe you have a 5th grader.

Love Jack's tie too. He's taking some tips from his older brother in the fashion department.

Coco - In N Out opens on 7th street this summer in the Fort. Woohoo!

You lead the most amazing life... always an activity going on. Love it!

And did not realize Carter's given name was Blake. Way cool. And please tell him his outfit for the ceremony thingie was badass. Perhaps choose a more kid friendly word. I don't always filter since I have no punks and the cats are used to my fbombs and other colorful word choices. But he looked baller. And now I am dating myself because Lord knows kids these days don't say baller. But just make it sound badass. So we're back to square one.

My M has some amazing blonde hair and Emmas hair is getting lighter by the day! I'm partial to blondies!

Your kids crack me up! That field trip looks AWESOME!