Question Of The Week - Do You Mardi Gras?

Ours kids think Mardi Gras is a major holiday just like any other. Well, they actually think it's more fun than most.

What is it? For the Wikipedia version, go here.

Simply put, it's a epitome of all celebrations prior to Ash Wednesday. Lent follows and then Easter. It's the party of all parties before we start repenting and sacrificing.

And, more. So much more.

Each year, we celebrate. It's been as simple as a Cajun dish of eutoufee or Red Beans & Rice. It's also been as elaborate as flying in live mud bugs for a crawfish boil. Either way, we love it.


Beads outside for kids to play with. 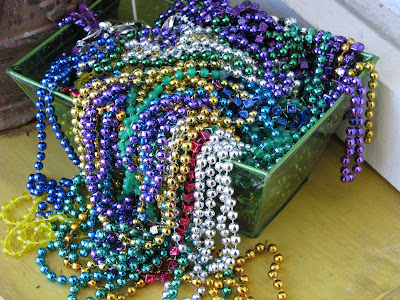 Mantle in the works. Mardi gras is full of excess. I need to tacky it up. 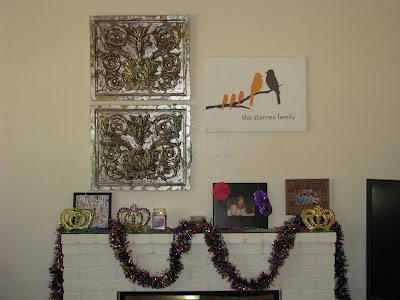 Our wreath, which needs an update. Crawfish and doubloons are beginning to fade. There is one strand of beads on there that Blake bought on Bourbon Street in 1999 when he came in town for Jazz Fest. Pre-marriage. Pre-kids. I held onto them for years not knowing what to do and then I finally created this wreath. Lots of good memories. 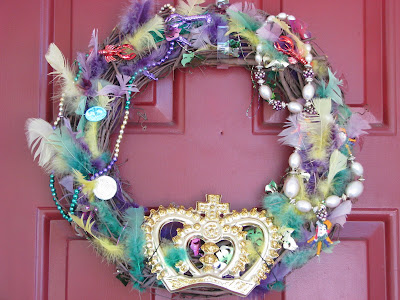 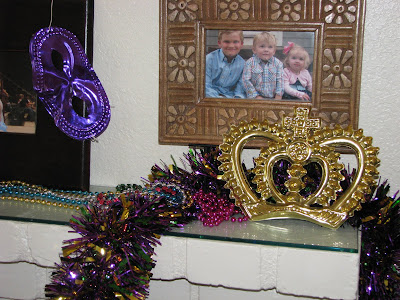 My Aunt Mary, who lives in Hammond, LA, sent us a King Cake Mix. Can't wait to make it! 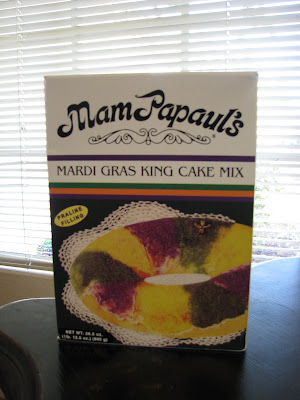 California peeps have not a clue what we speak of when we mention Mardi Gras. Just blank stares all around. The Midwest had seen a bit of it and Colorado, too. West Coast? Nada.

We're here to educate. If it wasn't such a rough season for crawfish, we might indulge and have a boil. Will likely be too pricey this year due to colder temps in the south.

But, don't fear, friends. We will celebrate. I'm craving a Hurricane like nobody's bizness.

And, we'll be indulging soon enough in the city of all cities for celebrations......New Orleans. Blake and I will be flying down sans kids this Fall. I cannot wait!

***Have you been to New Orleans for Mardi Gras?

***Did I leave out any fun traditions?

I love Mardi Gras!!! We always take the boys to the Fat Tuesday Parade and they love all those beads!!! My favorite part is that it means it's crawfish time!!! The boys were afraid to eat a Kings Cake for the longest time b/c my mom told them to be careful not to swallow the baby. Ha!!!

We don't decorate but we do go to a party at our local YMCA which is fun!

Oh girl, you know I Mardi Gras!! I don't actually care for the parades {bad experience from being trapped under a sea of people on Bourbon in college} but I love all the traditions about it. I've already had two king cakes sent to me this year!! Love me some king cake! My mom's friend also sent the girls lots of Mardi Gras loot. Yesterday, Addie had an umbrella parade at school for "u" day and guess which umbrella she chose to bring..that's right the purple, green and yellow one with the words Mardi Gras on it. That's my girl! Gosh...I miss all things La!

I think That Man and I are going to go to Mamou for the Mardi Gras run (Courir du Mardi Gras)~ you know since everything is closed in Louisiana for Mardi Gras. I CANNOT wait!

At one of the law firms I worked for the court reporting services would always bring a King Cake or two. One day one of attorneys, who was from NY and whose last name was Goldstein, happened to bite into the baby. He went back to his office and proclaimed to my friend who was his secretary that he found Jesus. She looked at him in all seriousness and said, "I though your people stopped at the Old Testament?" She calls me every Mardi Gras and proclaims in the loudest NY accent that she found Jesus.

Mardi Gras is on my Life List. One day, I will go. I should have gone in my much funnier skinnier sorority days. I've always wanted to try King Cake. So yes, us Californians know what it is...

You must have these for your celebration:

I've never been to New Orleans for Mardi Gras, but it's on my bucket list! We've partied with friends and stuff before...had a crawfish boil, etc. A local bakery makes a delicious king cake. But we don't decorate or anything like that. We're close enough to know what it's all about, but not close enough for it to be huge.

LOve your wreath! That's a great way to hold onto keepsakes.

Love New Orleans but never been for Mardi Gras! Love to hear about your celebrations and how you educate your neighbors!! Good Job Casey!

i thought mardi gras was at the beginning of feburary. you will be offended here: i hate new orleans - it's always humid and it smells. (i'm sorry!) i don't care for the color purple and gold brings back nightmares of gold polos and long khaki skirts we were forced to wear for choir tour in jr. high. i apologize to those of you who love this holiday, but i'm more of a may 5th kind of girl. can't wait for that one!!!

I have been to Mardi Gras in MOBILE, ALABAMA where Mardi Gras truly began. The home of the ORGINAL Mardi Gras before those stinkin' Lousiana low lifes stole it.

Have I been to Mardi Gras? Would you like me to answer that? I still have that pic of us standing in front of the "NOPD" baracade....when I had told my mom I was just going to visit you at LSU, but we would under no circumstances go to Mardi Gras. We sure were cute but not very smart!

I wish I could say we celebrate Mardi Gras, but we don't. We always get our ashes on Wednesday though!

I did celebrate a few year when I lived in Austin and so did a friend from LA. She & her hubby always did it up BIG! Since my hubby wasn't around they always invited me over for some fab cajun food & festivities! She would always bring a King Cake to school for our team to indulge.

I was in New Orleans one time during high school for Mardi Gras ... does that count? We went to the parades and did a lot of really fun things. I thought New Orleans was great! I still order Beignet mix from Cafe Du Monde all the time. I think I should make some for Mardi Gras! I'm not sure if Canadians even have a clue!

Can't wait to see all the fun things you guys end up doing.

Well you know the answer to that! Duh, of course the Creeches love Mardi Gras!
When are you coming to LA? Am I going to get to see you??

I ate some King Cake once. I almost choked on a plastic tiny little baby. I thought I was going to die but they tell me I won because the baby was in my piece of cake. I still have nightmares about this.

Dave used to go to Mardi Gras every year. They always went to some black tie ball there. I never went. And I think his hard partying days are behind him. We do however have 2 huge bags full of beads in the garage.

You and I were not made the same way. I was counting down the days for Valentine's Day to be over because I'm so tired of holidays. Although New Orleans is 1 of my fave cities ever and we just did a tour of Mardi Gras World, we don't celebrate anything.

Oh i love Mardi Gras! When i was living in Newfoundland Canada, they always had huge parties to celebrate-- tonnes of fun!

If you have time, i included you in a book meme-- i know you are always reading something great!

Well, let's see. I live in Pensacola so we have Mardi Gras parades here. We celebrate Mardi Gras; especially, because at times it's falls on my birthday (both real and fake birthdays)

I've been to Mardi Gras in New Orleans (with you) and made out with some boy in a van (me, not you.) And I don't remember how we got back to BR. Now, I'm trying to remember if that was Mardi Gras. Oh jeese. Geese. I plan on whooping it up the same way this year...only in Pensacola.

girl you know i be mardi gras-in.

we DO have bags and bags of throws and bead though. may have to pull em out for the kiddos. :)

We used to have a huge(G rated) Mardi Gras night at the Y I used to work at. It was so much fun! We threw beads over the balcony into the pool and made Gumbo, it was awesome! I am usually indulging in Diet Pepsi and Chocolate on Fat Tuesday before I give it up for Lent.

Hope your celebrationis great this year!

I do not MG anymore, have been there for it though!Don't think I could handle it at my mature age now!!!

OMG this makes me miss N'awlins! I loved Mardi Gras! I miss having Mardi Gras break...those were good times. The parades were the best!!!