Caroline's visit included a trip to the Denver Museum of Nature and Science for the Titanic Artifact Exhibit. Said to be a "once in a lifetime" opportunity to see such treasures, the tour lived up to the talk. The artifacts were interesting to see, but even more so were the stories heard.

We left Jack with Blake and attended the exhibit with Ryan, Caroline's boyfriend, who came in town for a few days. It was nice to have him here with the family.

The exhibit was filled with artifacts from the ship, videos, rooms and hallways built just as the ship was, shaking walls reminiscent of the boiler room, a demonstration on how and why the ship sunk, as well as a large ice sculpture shaped to be an ice berg so that we could feel how cold the water was. It was all very well done.

This is a boarding pass we each received upon entering the tour. It included an identity for each of us. We were given the name of an actual passenger, a brief history of the person, whether or not he or she was first, second, or third class, etc. We traveled through the exhibit looking to see if we matched any of the history lessons we read about and then at the end, we learned whether or not we survived the tragedy. It was a cool way to be involved. 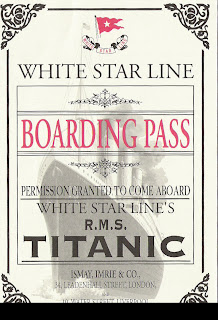 And, here we are after the exhibit, holding our boarding passes. 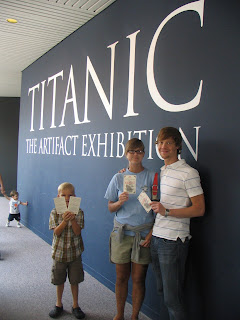 That is so neat! Is it a traveling exhibit? I wonder if it's coming here??

It is a traveling exhibit. Check it out if it comes through Dallas/Fort Worth!