Please click on this picture to see Jack in full lion howling mode. That kid is so weird. 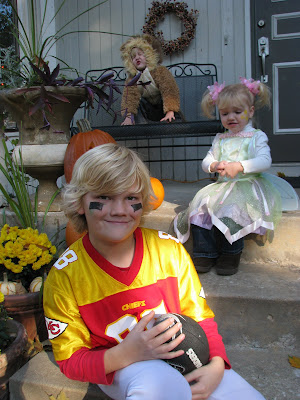 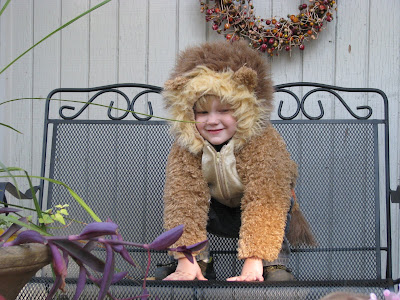 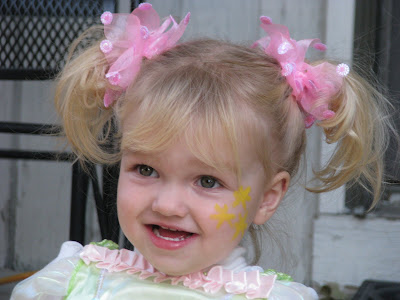 And, our football star. 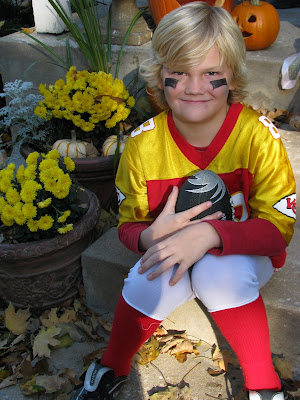 And, we had a costume change before even leaving the house. Jack has been talking about being a ghost for the past few weeks. He would put his Thomas blanket on his head, walk around the house and run into things.

I showed Blake and his reaction was, "Dude. Poor kid's going to get a bag of rocks." 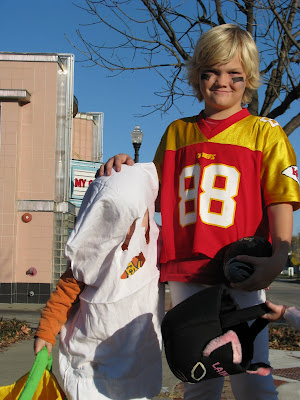 Yes, he trick-or-treated like this. We let him. And, laughed the entire evening. Lots of laughs from other parents, too. 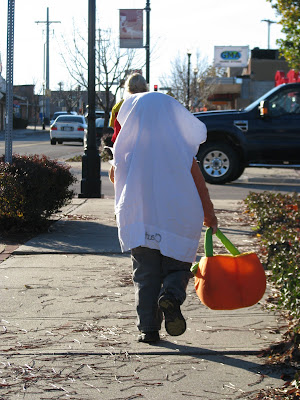 We started downtown and let the kids gather candy from local businesses. This bird feeder store is one of our favorites. 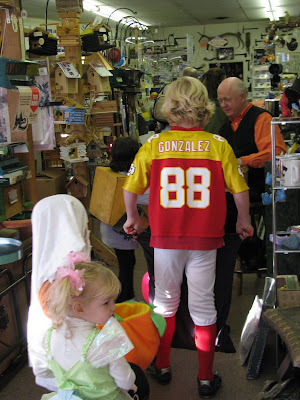 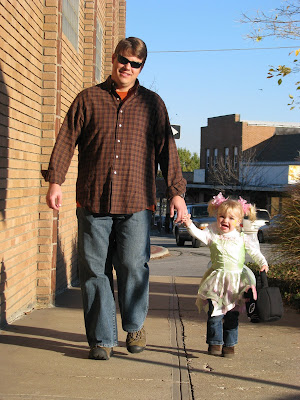 Wall-E, in the cardboard costume remarked about Jack, "You a ghost." Jack's response..."You a box." Awesome. 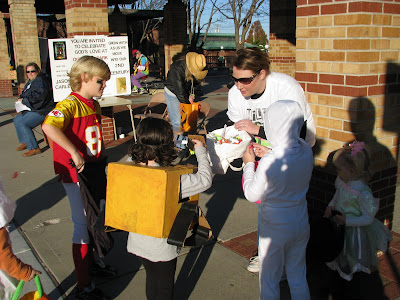 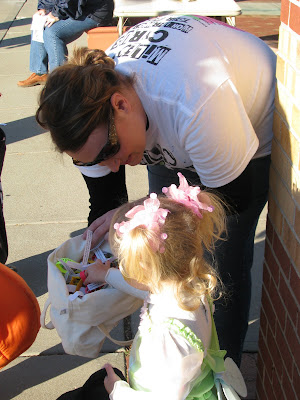 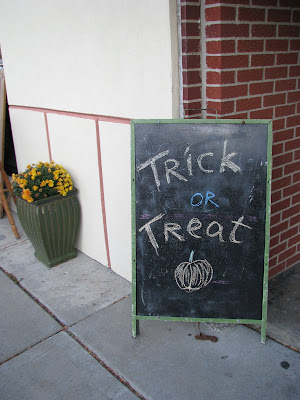 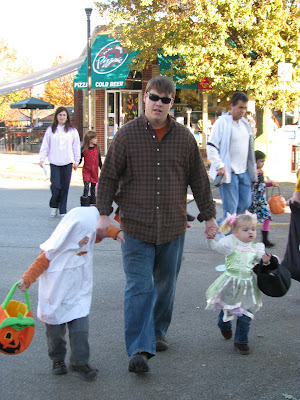 Happened upon the Kansas City Culinary Institute and I was smitten. I will now be stalking them for a part time seasonal job. Most precious place ever. 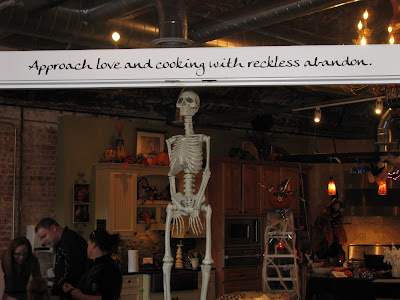 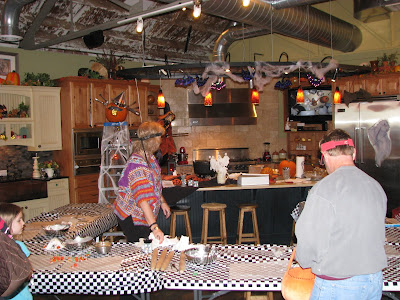 No idea who these precious punkins are, but I had to take a picture of the flying monkey from the Wizard of Oz. Very impressive. Handmade, too. 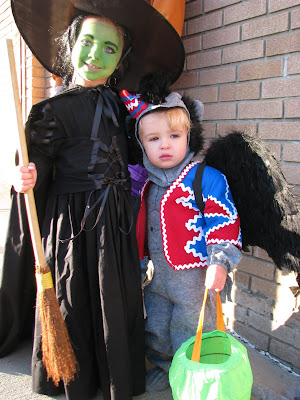 Still on the go. Yes, that lady is likely laughing at him. He had no clue. 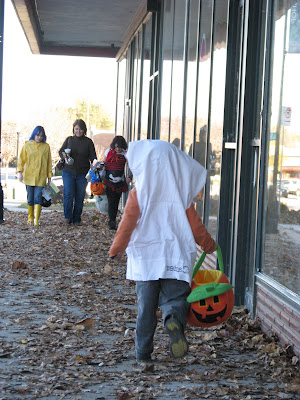 Two suckers in one hand and a piece of chocolate in the other. 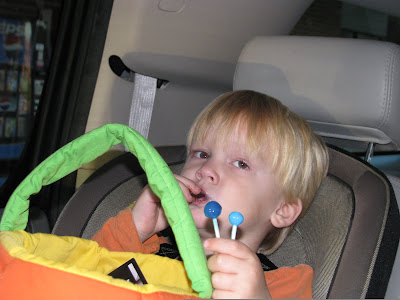 Back home and ready for trick-or-treaters! 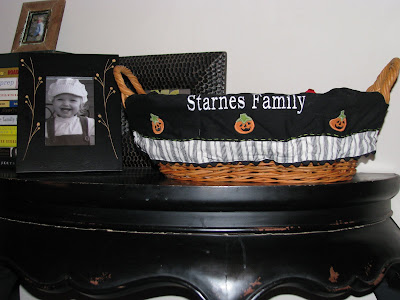 Jack caught a bit of The Great Pumpkin before leaving. A close-up look, obviously. 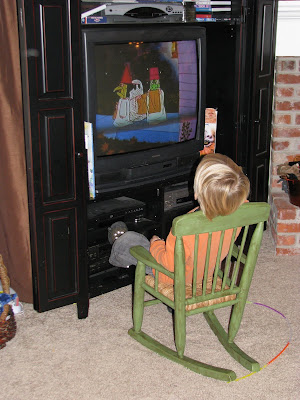 Our punkins. Did I mention I spent $7 on costumes this year? Lainey's wearing dress-up clothes given to her by my Aunt Mary for her birthday. Too cute not to use for Halloween. Carter is wearing his old football gear and a Chiefs jersey from Children's Orchard. Jack? We already covered that. And, the lion was Carter's from his 3 year old year. 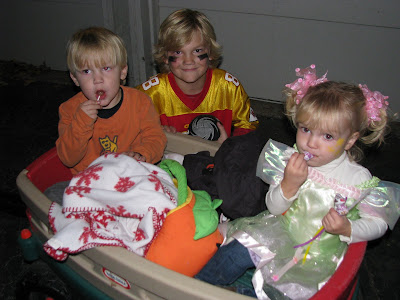 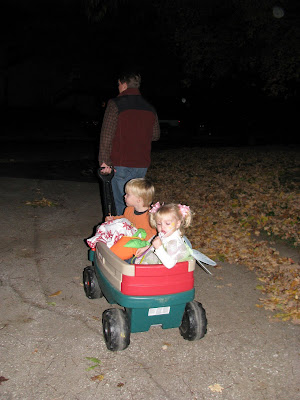 Jack was a pro by house #2. Lainey was mildly interested.....still not as aggressive as the boys. Carter led the way, but with sweet patience for the little ones. 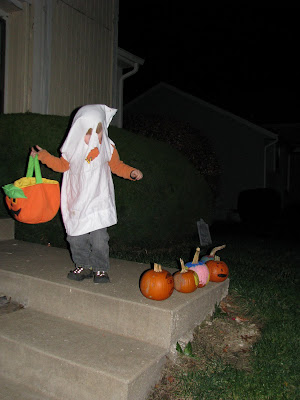 Such a great kid. 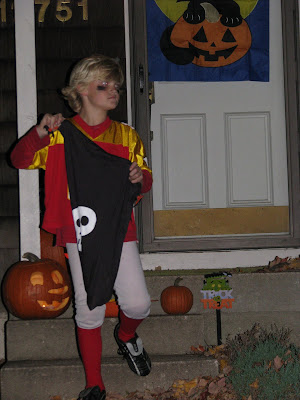 And, that concludes the Starnes Halloween from 2009. We're now into Thanksgiving and I have lots of fun stuff to share with you all. Coming soon!

Email ThisBlogThis!Share to TwitterShare to FacebookShare to Pinterest
Labels: Halloween

Precious as can be! Love it! They look adorable as I knew they would! Even Jack in the ghost costume. Eh emm.... did you know that pillowcase was monogrammed???

quit trying to be such a showoff with all your headers and backgrounds. whatever.

i guess the new one is cute too.

Heather - I thought of you when I was cutting the pillowcase....like I was betraying you. So sorry. Yes, it was monogrammed. But, it was 7 years old and stained and gross. No loss.....I didn't use it anymore.

Andy just said "I wish Casey could hear you when you read her blog." omg, your poor ghetto kid. My Blake's shoes for his costume cost more than you spent on 3 but it didn't provide nearly the comedic value. I need to think ahead on these things.

I am LOL!! The ghost costume are pictures you'll have to keep for years to come.
It's is very charlie brown! How fun that they had a trick or treat downtown?
Looks like fun! Also, so want to get one of those basket covers as a gift. Where did you get it? Etsy?

Awesome pictures!! The one of Jack howling is priceless. Love it.

And the ghetto ghost? Bless his heart, he has no idea.

Dee - Pottery Barn Kids for the basket liner! We have one for each season. Love it.

My sweet little Jack, bless his heart! Love it.

Love the costumes! Lainey is looking like such a little girl now.
I'm slowly responding to your e-mail. Sorry, more explaination whenever I finish my e-mail (hopefully today)!

Love the ghetto ghost and his comment "You a box?" - OMG too funny. Hey I spent all of $5 on the girls costumes this year. Borrowed one for Chatty and reused Chatty's old one for Bia. Smart move Case!

Adorable photos!!! Kids look like they had a fabulous time. And, I'm so glad you had a howling lion...mine just screamed the whole time.
So jealous of you and Coco and your new headers. Very cute!

Carter is lookin pretty damn cute. Like I kinda wish I were in 3rd grade. Creepy?

Sweet fairy Laine. Love the painted stars on her face!

These are so sweet. . . and Jack is just too funny! I was seriously laughing out loud at the picture of the "Wall E" kid and the comments. Carter could not be any cuter!!

Love the ghost costume! It's the first ghost I've ever seen that had corners.

I think you might be on to something. Next year you could get a yellowish pillow case, cut lots of holes in it and call him swiss cheese. Now that would be ghetto!

Seriously, they are all cute as can be like they always are!

Your Halloween was awesome. Makes me more depressed that ours was such a bust! Anyway, the costumes were precious and Jack continues to crack me up. Love that kid! :)