Most. Patient. Cat. Ever.

We hit the jackpot when we rescued this kitty 3 years ago from the Castle Rock, Colorado animal shelter. They had itty bitty kittens (very easily adopted) and older cats (also attractive because they're easy to care for). Batman was 5 months old, so we thought he had less of a chance of being adopted. Seemed like the right thing to do.....and our instincts paid off.

I'm a big believer in adopting animals. There are so many, many in need of good homes. When the time comes for us to get a dog, we will rescue him as well.

Back to Batman.....take a look at what he gracefully endures on a daily basis:

With his "baby". More on that later. 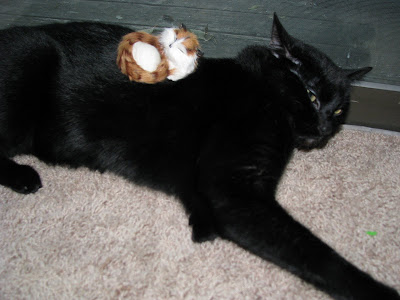 Please disregard the funky film on this window. I've given up. I still don't understand how it gets this way.....Jack and Lainey slime it throughout the day with their sippy cups and such.....I'm over it.

Here is Batman with "Lamby" keeping him warm. 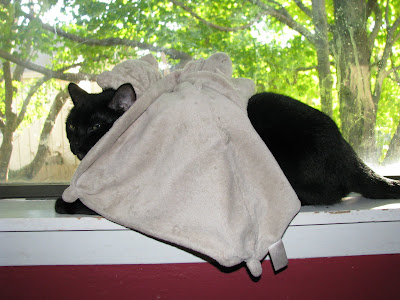 "Batman needs a hat." (Notice that's Jack holding the tongs and Lainey standing close by. They work as a team in most cases when it comes to Batman.) 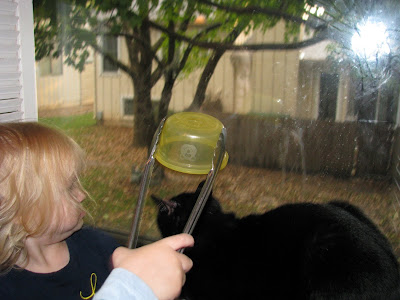 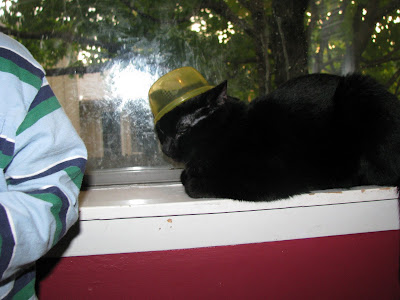 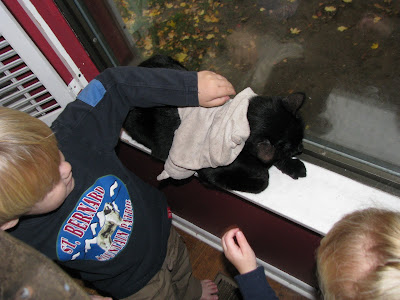 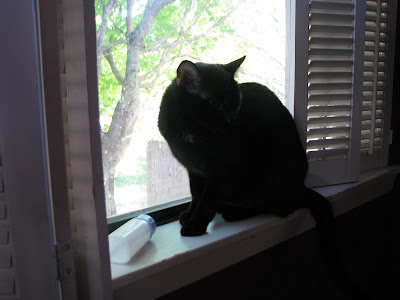 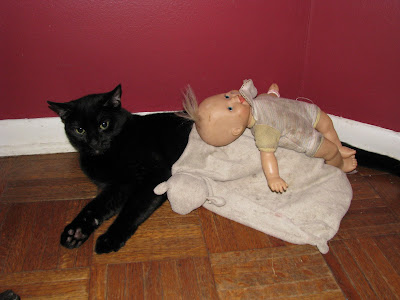 Here is Lainey encouraging him to be a Mommy to this tiny fake kitty. She puts it by him all the time. He couldn't care less. 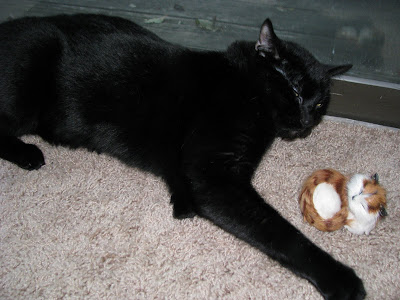 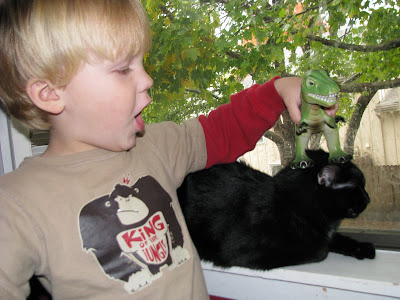 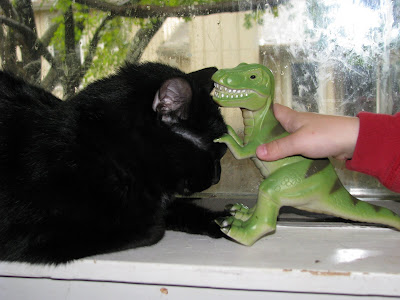 They've tried to teach him colors, numbers and the ABCs. I suppose they haven't noticed that he doesn't talk. 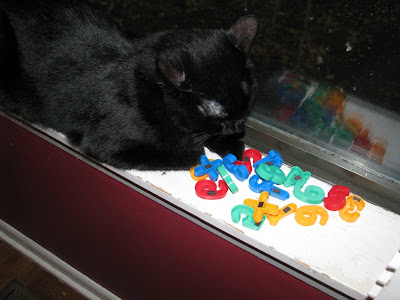 Who else would tolerate this?!

Email ThisBlogThis!Share to TwitterShare to FacebookShare to Pinterest
Labels: Batman

that is just hysterical!

Ok, tears in my eyes laughing at this. Had to read it twice. Dis you baby, Batman!

First off, LOVE the picture of Lainey in your header....gorgeous!
Aww, I miss my kitty. We also adopted a 5 month old kitty a few years ago and he was part of the fam. But when we sold our house and moved to the student housing, we had to give him away. I was sooo sad, and I can't wait to have pets again! They add such a fun dynamic to the family! I always tell Nate that when we're empty nesters, we're going to buy a big farm and adopt a zillion homeless pets!!

Our dog Casey (I know you love her name) was rescued and she has the same passive personality as Batman. Maybe they are just grateful that we saved them. It has been three months since Beano died and I'm not ready for a new dog yet, but when I am, we will get one from DFW pug rescue. They have 90 pugs available in foster care right now in this area.

Hilarious! Y'all definitely lucked out with Batman. VERY tolerant!!

Love the tongs and "hat." Perfect.

And our back door is always disgusting and I windex it every single night before bed. Kids are gross.

And Martha and Pedra are both adoptees in the Coco house as well. The best dog and cat ever.

I'm not a cat person, but I love this cat. He's more like laid back dog. What a fun memory these kids will have with such a great pet!

I love "dis you baby, batman" so sweet!

That is too cute! My dog gets put through the same kind of torture! :)

That is one special kitty you have. Either one of mine would have tried to take out someones eye if they put a hat on it. I have one that hisses everytime I touch her. But yet she sleeps curled up next to me every night.

Love it! They are lucky to have Batman!

Allyson, I really can't believe he hasn't tried. He's never hissed at them. He'll try to scratch here and there, but he's de-clawed. For the most part, he's extremely tolerating. So lucky! Expecially with Lainey.....we got Batman before we knew we'd ever have a girl.....so I'm glad they're a good fit, too.

Hi Casey. My name is Christie and stumbled upon your blog from Coco's. Coco doesn't know me either. I found her through Mrs. Merry Mack. I have to say I love your blog! You have such wonderful ideas. Our pumpkin seeds turned out fabulous thanks to you! We are putting in our order for our very own The Elf on the Shelf. My sister and I had one just like that growing up. You reminded me of this tradition and something that I would like to carry on with my family. I also love your "Thankful Turkey!" Way too cute. You have a beautiful family, BTW. I just wanted to introduce myself and tell you that you have another loyal reader!

I just peed in my pants! Love Jack with the tongs--what a funny kid!!!

I need Batman's patience! Sweet cat! I'm a believer in adopting as well. Sugar dog is adopted and she is the BEST dog EVER! Extremely sweet and patient with my girls and any kids that come over!

lol, so cute! What a patient kitty!

I believe in adopting animals too. Both our animals are rescued. Dog, tied to a short leash and left to hang herself. Cat, left by her mother in my school drain. Now we have one of each filled with aggravation and love. Batman has more patience than my animals.

HaHaHa!!! I love the tongs!

Hi Casey! Thanks for stopping by our family blog tonight! I wanted to let you know I also have another blog, www.momma2thea.blogspot.com. I actually made a reference to you on that blog today (all your awesome holiday stuff). Thought you would like to know I am also putting your name out there! Take care!

OMG. This is hilarious. Batman is a STUD! Dis you baby. Classic.

I wish I would have a adopted a dog! I wanted a pom so bad and didn't even think of other options. I'm so mature.

Sweet Batman...whoever says cats have no personality doens't know what they are talking about! I love all animals, especially adopted ones. Our dog, Henry, was adopted, as were all our pets growing up! I just roll my eyes at people who actually buy pets from breeders! Disgusting!

I am *SO* thankful that you came over and posted on my blog, otherwise I might've never found you, your delightful family, and the sublimely awesome Batman! What a riot! Classic, classic post!
Anne