Latest Scoop To Kick Off The New Year

Sup, blogging world? It's 20Ten and the Starnes family is here to start off the new year with a bang.

Let's begin with an American Girl shout out to the newest name in popularity. Who knew I was such a trend setter? 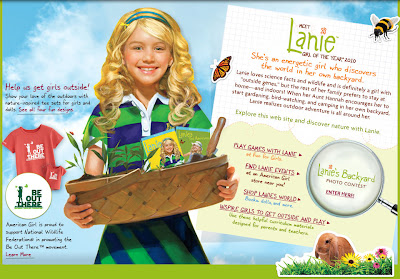 Sure, they spelled it wrong. But, I have to agree with their description of Lainey. A natural girl at heart. I love it. Kind of looks like her, too, huh?

And, while we're talking nature, look at what sweet Caroline gave me for Christmas: 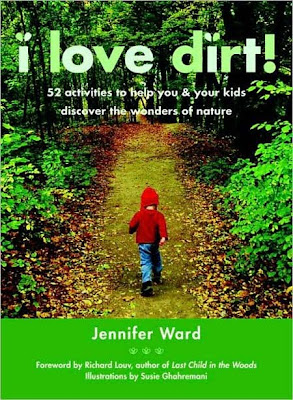 Is it me or what?

Tonight, while I was contemplating how much more football I could stand before I set up camp in the basement, Carter blurted out the following:

"Is Leach out there?"

Umh......how does my 9 year old know who Leach is? I'm not entirely sure who Leach is. Ok, I am. He's the Texas Tech coach who "allegedly" locked a kid in the closet for having a concussion. Get ahold of yourself, Coco and Carrie......I don't know the whole story.....so I'm not commenting on it......rather, I'm showing how into football our oldest son really is.

And, he's quite good at it, ladies. Before the bowl season started, Blake and Carter sat down to choose winners. With just a few games left, Carter has already won.

Before the big bowls even started. Based on his predictions.

Is Blake bitter? Defeated? I'd say so. 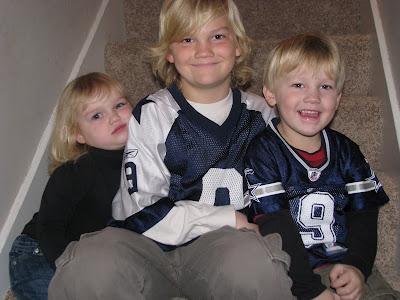 And, look at these Dallas Cowboy punkins. Pa and Mae Mae bought Jack a jersey to match Carter's. Super cute. Seems as though Lainey has the same interest in the game as I do. 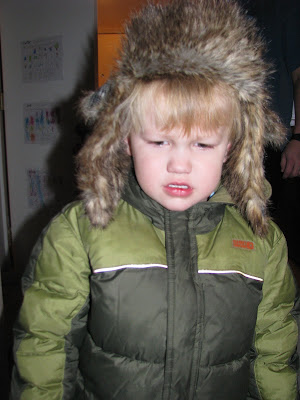 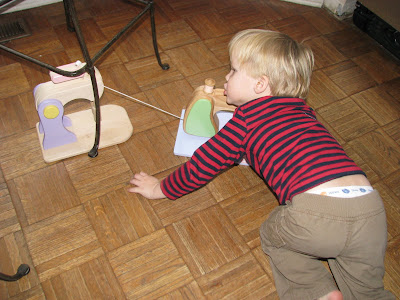 Did you know a wooden sewing machine and kitchen aid mixer could be linked together to make a train? Yeah. It's today's train connection. Now, you do! 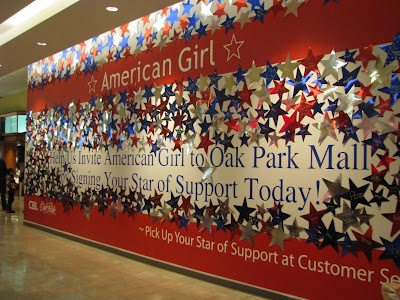 Blake and I took the children to the mall on Christmas Eve. I know. We had not been all year....as I posted before....and went briefly for a couple of things on the busiest day ever. Saw this campaign for American Girl. 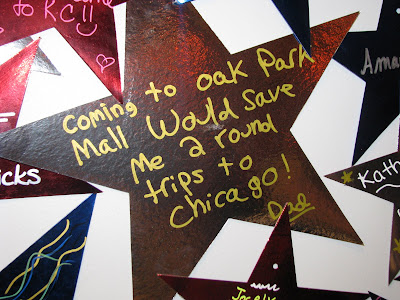 And, then the star pictured above. How cute (and true!) is that?! ****Chicago is about the same distance to us as Dallas, by the way. 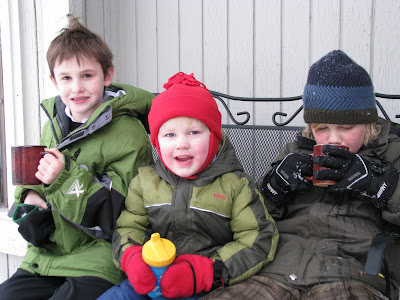 We've had a huge amount of snowfall here in Kansas City. More than normal, from what I understand. This makes sense. We moved to Colorado in 2006 and a few months after, a record Christmas blizzard hit the area and hung around for several months. Seems as though the Starnes family has brought the same "crazy" to the Midwest. 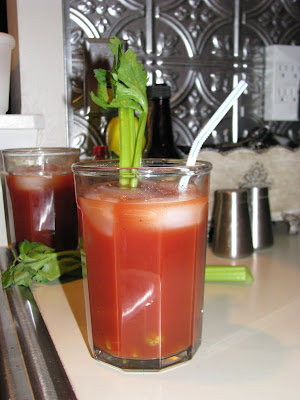 Lots of snow days = cabin fever. The above pic showed our remedy today. 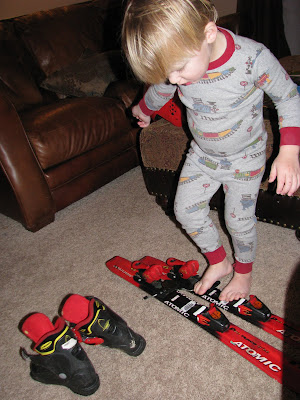 And, rather than making drinks for the remainder of the winter, we're venturing outside to embrace the snow. Ski day, baby! Here is Jack getting ready. 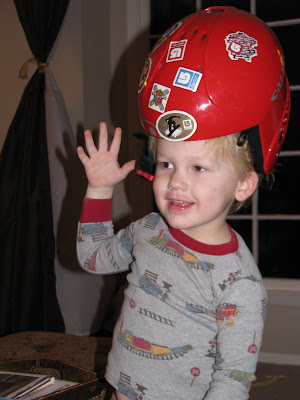 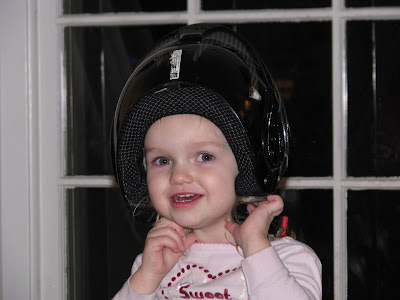 Sometimes I don't know who these kids are. Jack is horrified by the simplest of things.....yet, puts ice skates and skis on like he's been accustomed to them for years. 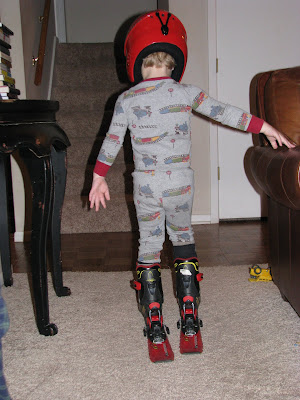 He cruised through the house like a pro. This picture reminds me of him from his baby years. Notice the Clemens forehead peaking out. 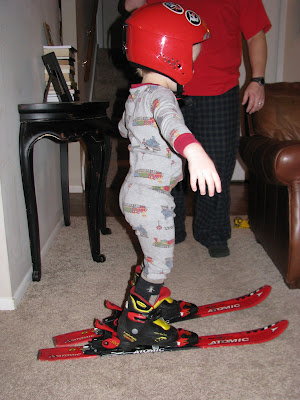 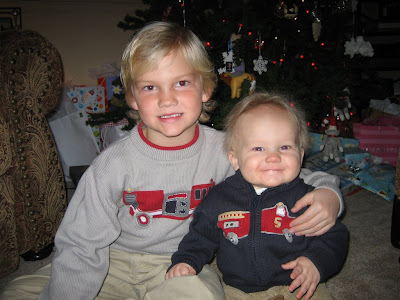 Look at this kid......like a pro (I still can't do this gracefully).....he pushes himself up from "falling"...as we practiced in the living room tonight. 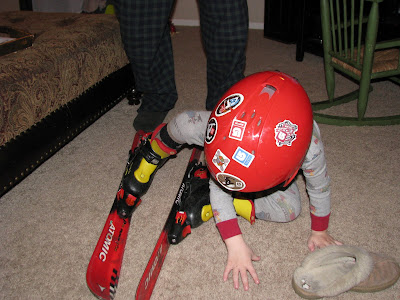 And, finally, Lainey bug is preparing for hitting the slopes for the first time tomorrow. 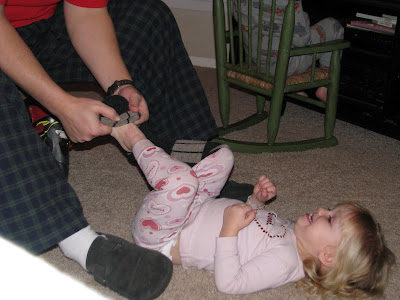 We don't know if she'll be willing, but she's ready. 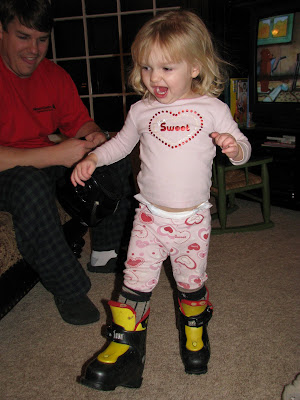 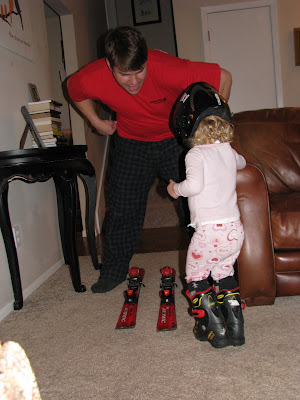 Little punkin put the skis on and headed towards the front door asking for snow. No lie. 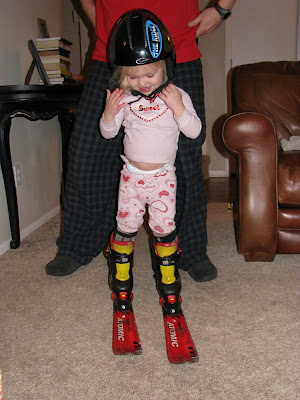 Since the Rocky Mountains aren't in our immediate reach (moment of silence, please), we're headed to a local resort......only about 30 minutes away. Snow Creek in Weston, Missouri will do the trick tomorrow. I'm intrigued by this place. 12 runs, tubing galore and a terrain park. Can't wait to see what Midwest skiing is all about.

One more thing......check out this link to see how the rest of the world rung in the new year. A nice reminder of how we're not the only country in existence.

Casey...seriously how do you not know about football?
love that pic of LC so bored with football!
i could totally go for a bloody mary right now...ove that drink

My husband and I LOVE college football and next week we will go into mourning that it is gone until next fall. We count the months until the next season. Although, our children just look at us and say "Is this game still on?". We don't tell them that it is the third one today that we have watched. Happy New Year!

Umm, I am anxious to haer hwo your midwest skiing experince was. If it weren't 12:15 AM I would be off to have to Bloody Mary now :)!

PS- thanks for brining the snow with you! I LOVE it!

KEEP the snow. You can have it. No thanks. Glad to be out of it.

Andy always says I'm the weirdest person because I totally GET football. I know how it's played, can follow a game but I HATE it. Hate. I suspect you're similar.

You guys are so freaking brave going out in the FUH-reeeezing cold with 3 kids to ski. Our kids will never know how to ice skate let alone ski (Andy and I can't do either one, we've tried and it doesn't work). Plus, Blake refuses to go outside when it's cold because that would require wearing something he won't: layers.

I'm with the rest of the gang on the football. Love it - even though this year I havent had too much time for it.
As for skiing.. so jealous. We have a resort 2 hours from here and will go after the wedding even though it is super lamo.

Have so much fun today skiing! Can't wait to hear all about it...

Classic pic of Laine with the boys in the football gear... classic.

Blake is in heaven with Carter and the football, I'm sure.

My boys love football. I hate it -- In fact, I can't even find the ball. While they watch football, I head to the mall. It works perfect for us!

I hope you have a great time skiing today. Can't wait to see the pictures!

have so much fun skiing!

we waited this year to do american girls (like we had originally planned) but cannot wait to get started with them...

not big on football, just the atmosphere... I love that Bryce loves it, and now that I have a son playing I am learning about the game. Went to Plano games every Friday night of my life and then college games but never had a clue... don't like watching it on tv.. and all my boys are into it, of course... she writes, snuggled it a blanket watching HGTV in her bedroom while everyone else watches football in the living room! Can't wait to hear all about the skiing... AND, by the wear, we're not expected to go much higher than the 20's this week... in friggin' Texas... come on SPRING!

why the h did I write by the wear? I think I meant "by the way!"

Decided I couldn't watch any more bowl games so I read a great book instead!

When I was little... American Girl was new. They only had four dolls... and I remember when I got my first doll- Kirsten. My sister got Samantha. I was on top of the world... And how awesome they now have a "Lanie."

I love me some bloody mary!