First, some recent events and then I'll dive into some other stuff.

We met some friends at the Sunset Market near the ocean last night. First time going and it won't be out last! 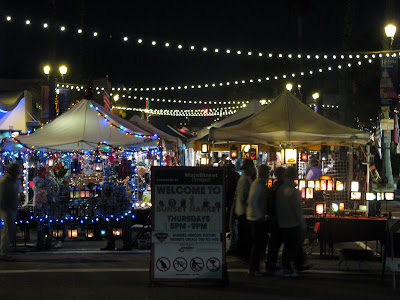 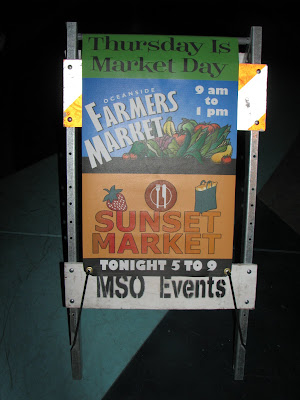 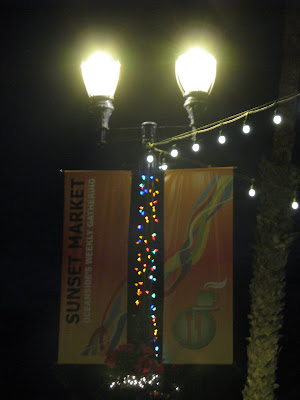 Jack was in heaven. Our friends have 4 kids and 3 of the boys are ages 4, 3 and 2. Finally Jack has some buddies! He's always stuck in the middle of Carter and Lainey's friends. 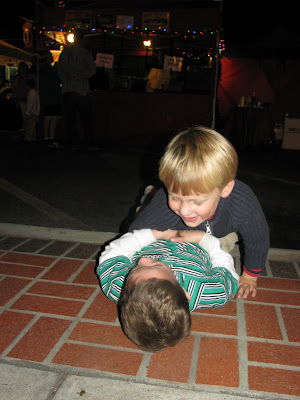 Here are Holly and her 4 kids + the 3 Starnes kids. Holly is the wife of an old friend of mine from college. Super nice people and our kids got along famously! 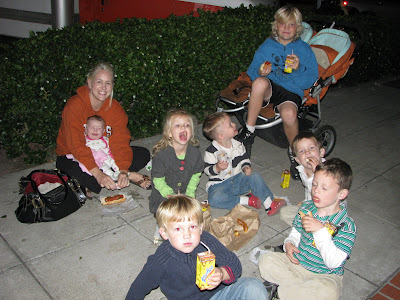 Listened to some music. 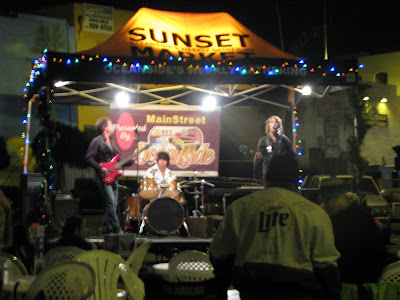 Saw some fun stuff. Kids had a blast. Then, we rushed out to Carter's basketball practice. First game of the season is tomorrow! 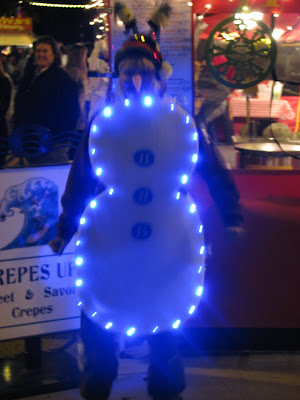 Loved this sign from one of the booths. I heart California. 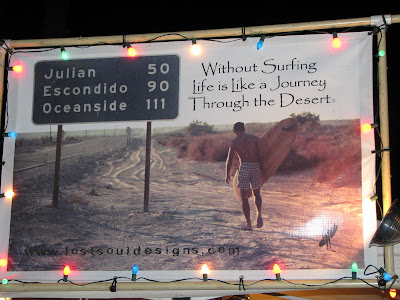 My latest love for the little ones......Paul Frank boots. 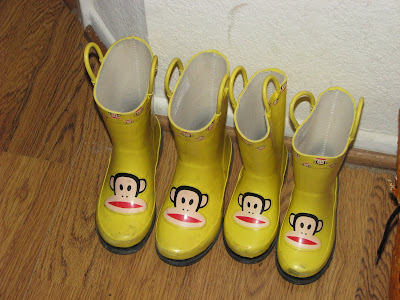 Lainey injured herself yesterday helping me water plants. I somehow wrestled her down to the ground long enough to put a bandaid on to stop the bleeding, but she hasn't used that hand since. I'm expecting a week's wait before it's put into action again. See her coloring with her left hand here......not normal for her. 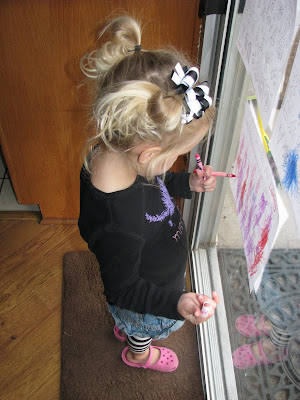 We've had a lot of crazy Elf activity lately. One morning, we woke to find that Stephan had broken a couple of ornaments. 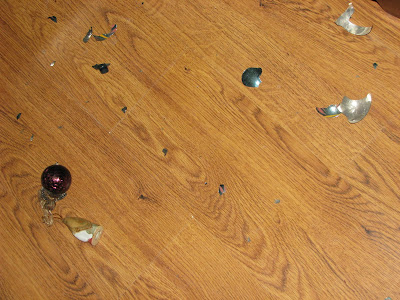 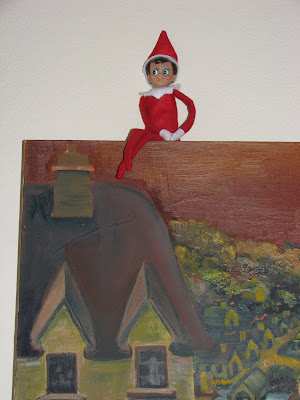 And, as hard as he tried, his presence wasn't enough, it seems. 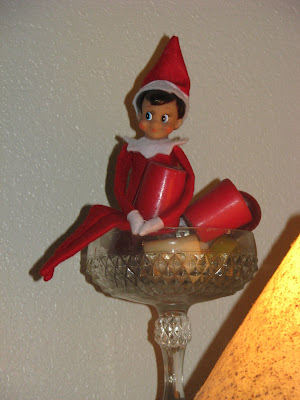 So, another showed up last night. Must be part of some sort of middle-management intervention program. Lainey insists she's a girl and wanted to name her "Princess Lainey Elf". The boys vetoed that one. We settled on Ruby. Not sure if she'll be here every day or only when some reinforcement is needed. Stay tuned. 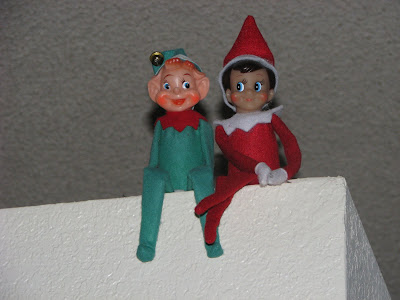 Lainey is anxiously awaiting her Santa gift with hopes of it being decked out with pink, sparkly, over-the-top Princessy goodness. Until then, she's still using Jack's hand-me-down trike. Sassy Kitty, too. 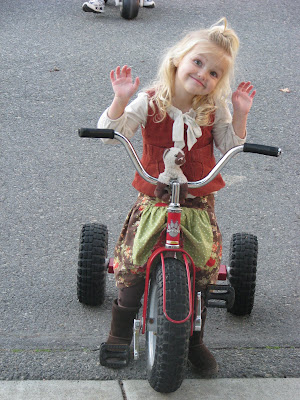 Tacky Santa + Lainey = true love. She talks to him. Need to write that one down for future therapy sessions. 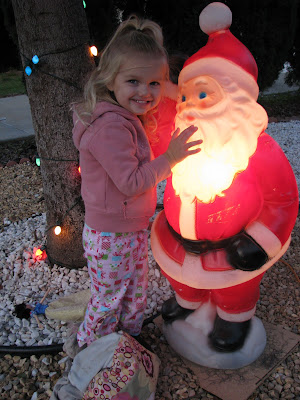 Oh, and here is the 1978 version of the Advent calendar my brother colored in Kindergarten. Hopefully you can see some similarities in my artwork. Haters. 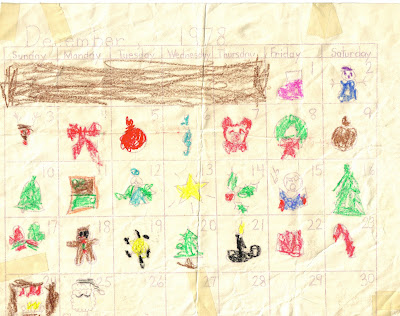 ***Carter's 10 year old birthday party. A few kids are coming over and staying late and then one is spending the night. Should be fun. And, hectic. I think I will be hiding in the garage with wine.

***Blake is home this afternoon after being gone since Sunday. It's been a doozy of a week, but we're growing accustomed to the travel.

***And, drumroll please.......we're fully insured again! Beginning June 1, we went on Cobra. If you are not familiar, Cobra is mega-expensive. Luckily, no children have been sick and I've only had 2 appts - one routine and one for bronchitis, which we paid cash for. Lainey's well check, TB tests for California schools, and flu mists for the fam were handled at the community clinic. Not the easiest or most glamorous route to take, but money-saving and certainly smarter than paying full price or tapping into Cobra. So, I'm a bit more relaxed these days after 6 months of anxiety. Kids can feel free to juggle knives and jump off the roof again. We're back to normal health care!

Hope yall have a great weekend. I'm off to volunteer at Preschool and then prepare for the weekend of festivities!

"Kids can feel free to juggle knives and jump off the roof again." Classic Casey - Classic! I am wondering if we need elf reinforcements too....

I love Lainey colouring with her 'broken', not usable hand! Love love that her crocs are on the wrong feet!

YAY for insurance--phew! Seems like it is all coming together for you--enjoy Blake being home!

yay on being insured and kid's parties! i cannot believe you have a 10 year old, hot mama!

lainey is freaking ADORABLE and those naughty elves, PERFECTION.

That looks like it was a fun place to go and I love all the lights there. Hope you have a great weekend.

Love that the elf has a friend now!! Too cute!
As for the insurance. I bet you are THRILLED!

The pants that Lainey has on while talking to Santa... pj's or day time pants??? We have an ongoing discussion about them. We have 2 pairs and when they were Ainsley and Brynn's, they were regular clothes. Now that they are Brynn and Brooke's, they have been transformed into pj's.

you can go back to knocking the kids around! YAY!!! I heart California too...so much more glam than OKC

Have a great weekend! I love the elves and Santa too, we had a Santa just like that growing up!

Your insurance is going to come in handy with the fireworks I just sent the kids for Christmas. Good timing!

I think I want to move to California. It is so dang cold here. You got out just in time!

Christmas in California looks like soooo much fun! Hooray for insurance too!

Seriously, can Lainey be ANY cuter?

I want a Advent Calendar.

A) Lainey's shoes are on the wrong feet. B) I'm soooo happy for Jack that he had 3 boys his age to play with! Are those Mike's boys? So fun!

What a relief to have insurance again!

Glad things are going well for you guys.

I can't believe how big your kiddos are getting, not surprised that they are getting even cuter!

Jillian - not sure. I am leaning towards daytime pants b/c of the embellishments at the bottom, but I think it came as part of a set that seemed more pj-like. Funny you should ask.....I put her in this outfit for Carter's bb practice. We stay in the car and watch movies b/c it's too cold outside. The kids always fall asleep, so this was a daytime/works for bedtime, too outfit. :)

Hann and I stalking your blog... waiting for our cheer. But this did quite well in the meantime. We're laughing (in a loving way of course) and the fact that Lainey will not use her injured hand. Kinda love her spunk :)
And Stephan and Ruby crack me up... I love that Stephan actually broke ornaments... bwhahahaha!!! I love the idea of the elf watching over the kids, I just wish they hadn't made the elf look so... creepy. Can't put my finger on it, but he looks oddly sexual and impish. Maybe I'm just a weirdo.

I hope Santa brings Lainey pink princessy goodness. I am so happy for you and insurance. This no job business is for the birds. The stress is overwhelming. Way to be resourceful. I had a TB shot three weeks ago and my arm still hurts. I hope Ruby works het magic.

*High Five* for being fully insured again! Is there anything worse than not being insured?? Tip Toeing around, hoping you don't fall and break your arm. Seriously.

At times their little beady eyes make my skin crawl.