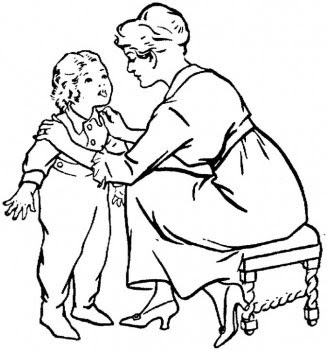 Our oldest, Carter, is 10 years old. He's a well rounded kid, blessed with many talents including being wicked smart and athletic. He also got the strongest Starnes gene, making him extremely likable. And, while he excels in every subject thus far, he still mispronounces one word. And, I can't bring myself to correct him. If he gets it right, what is left for me to teach him?

You can guess that it's used quite often around these parts with dumb and dumber Jack and Lainey nipping at his heals.

Of course, Jack and Lainey provide us with endless possibilities regarding speech correction. They're 4 and 3 years old. It's part of every day life.

A few of my favorite recent ones:

Jack (while frustrated, gets flustered and often misses in his insults):

Lainey goes a step further and confuses everything. Some background: Since Carter could talk, we've encouraged our children to pray when they see a firetruck or ambulance with lights on and sirens blaring. We've explained that no one can be certain who is inside, where the emergency vehicles are going or what happened. So, we say a simple prayer, "Dear Jesus. I hope everyone's OK. Amen."

Lainey, confusing the need for prayer with the reason behind Christmas now exclaims, "Dear Jesus. I hope everyone's OK and have a Happy Birthday!!!!!!!!!!"

Lainey also insists that several friends at school are her "cusmens" (cousins). Shay, the bonafide alpha female of the class, fascinates Lainey. She follows her around soaking up her powers and hoping one day she'll exude that kind of confidence. She was labeled her "cusmen" immediately.

Finally, while it's not an entirely incorrect use of the word, we can't help but laugh each time Jack and Lainey fuss at Batman, referring to him as "dat stupid cat." I assure you, they did not learn this from me, as I think Batman is brilliant and on any given day could win Most Likely To Succeed among this bunch. But, it's still pretty funny to hear.

What did you say incorrectly as a child?

What do your kids get wrong?

Busy day today, folks. Several projects around the house this morning and then off to Preschool. We'll pick up Carter shortly after and head to the beach to meet friends for a sunset picnic. Have a good one!

I think Batman and my cat Noel are cusmens!

I like the prayer thing for ambulances and firetrucks. I've never heard that before but will have to keep it mind for future use :)

I'm still in the little kid phase too-where getting it wrong is working it out!

Though Beebo does say, Alligator (Elevator).

And i remember my brother saying Pillow incorrectly for a dogs age!

LOL-thanks for the memories! Happy Friday!

Cusmens - is Lainey secretly from MS??? Such a cute post Casey! I will have to remember the praying thisn with ambulences and firetrucks, that is very sweet!

Love this post. It brings back so many sweet memories of my little guys when they were younger. My Carter still has his moments like these. The teacher in me wants to correct him, but he's so darn cute that I hate to do so!

I can NOT pronounce "Ambulance". I can if I try hard, but most times it is pronounced "Amblance"

I also say a prayer everytime I see an ambulance or fire truck. I guess in some way I hope that if it's me or someone I love in there, someone else somewhere out there will be praying for me.

And I love that Lainey screws up the prayer... awesome. And cusmens?! Best word ever. Best.

We grew up always praying for emergency vehicles as well... and now I do the same with my girls. They will remind me if I forget. I LOVE Lainey's prayer.

No, Browned Eyes Girl Mom, but I do love Louisiana!

I wouldn't correct Carter, either. Ellery was helping me hang-up the ornaments on the tree and I kept telling her those are breakable, they are glass. She then came up with her own version and starting asking, "Mommy, is this one glassable?" I giggled everytime she said it, but I could not correct her. I love the way children annunciate things.

The other day Ashlyn want to "Load one down" because we don't have any Christmas movies she hasn't seen already.

Ashlyn also got very flustered that I was not giving her 100% of my attention, while changing a poopy diaper, while she was talking about the reindeer and said, "the nose red one."

She also says downspairs for downstairs and bamb aide for band aide. I think it is so cute that I can't make myself correct her!

I love hearing the things that kids say! Great post. Have fun at the beach!! It is 5 degrees today and we got a dump of snow this morning. The beach sounds heavenly!

I used to say speech "impairment" but it's "impediment". I was obviously older than a child. Anyway, I remember being corrected and not giving a shit; thinking "same thing." Whatev, cusmen.

Ainsley says "hosbibal" for hospital and it just sounds so cute that I don't correct her.
Brynn says "yester-year" for things that happened in the past and "last day" for yesterday. I just love it. I hope she doesn't stop that for a long time. Ainsley keeps telling her that those are not words, but we quickly change the subject.
I was laughing at "glassable" because my girls say that too.

I like the little prayer. Have never heard of that but....I've got nothing to add on the mispronouncing thing. My kids didn't really mispronounce past the age of 2. Pasketti maybe?

My Katiebug still calls them 'windshipers' instead of windshield wipers. I think she still says 'living loom' and not living room. Of course she'll be 23 in March but I still think it's cute. Now what does drive me as crazy as a sh*t house rat is when adults say 'pacifically' instead of specifically.

Can I be the Louisiana cusmen?

Ambilance-Ambulance I still can;t get it right. Alyssa says sweket for secret. When Mas is frustrated with his sister he calls says is Awissa instead of Alyssa. Makes me laugh just thinking about it.

I LOVE to hear the crazy things kids say and I would never wish away time but I can't wait for Emma to stay some silly things and then make fun of her til she cries. This is how I was raised so I will need to pass the torch. I'm also convinced this is why I drink a little.

Thanks for the shout out on your scoop post. The end is in sight!
Oh those kids. I love Jack's "insults". Priceless.
The other night Lainy was refusing bedtime and yelled at Tony, "I'm putting my FOOT ON IT!" (Putting her foot down) Hilarious. She's still utterly confused on why it was so funny. We're now using this phrase on a regular basis.
Oh, and Batman is def Most Likely to Succeed. I'm glad you've accepted this.

Cason is also 3 so I could go on for days with this one. But my favorites are:

He also leaves the S off the front of words that start with S. Like Snake is nake.

Cute post. My family did the emergency prayer too. I need to start that with MM. She still says words funny.
Ariffric= terrific
Stock a stots= polka dots
Headack= headache
Accidick=accident
She has a funny one for band aide too but I can't remember. A few others but I have a head injury so that's the best I can do.