Most of you know that Carter is forever entertaining and interesting, to say the least. Well, he has become quite a story teller. Our neighbor across the street and good friend, Tracy, reports to me about stories she's heard including Blake wrecking our car because a blind moose walked out in front of him and they collided. She calls Carter a "fish taler" as he calls it because he is always making up some story to tell her.

Others have heard we used to live in Mexico and we sold hammocks on the beach to pay our bills. We, as his parents, have heard it all. I just wonder what his teachers have heard and consequently, what they think of us?!

The latest on-going tale includes Carter in a band at school called the "Dead Eagles". They play during lunch and have t-shirts made with a single dead eagle on the front with "x-ed out eyes and his wings fallen off". All the girls always want to sit by Carter during their breaks. They've even been on tour. So, I had him draw a picture of the band and their logo (from the t-shirt, of course) and this is what he produced..... That's the drummer on the left, the guitarist next, microphone and Carter. And, of course....the dead eagle at the bottom. 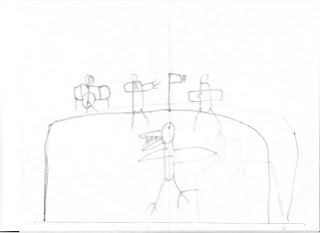 Seriously, how does he come up with this stuff!!

I read this outloud to Andy and he said "are they worried about it at all?" lol...hard to know where creativity ends and lying begins but either way, it's hilarious!

I wish I knew, Jen. How about the blind moose walking out and hitting Blake? I'd love to know how his little mind works.

We've been worrying about Carter since the day he was born. This child is like no other!

Dude, stick with the dead eagles. They'll make him famous one day!