December was a difficult month for Carter. This was the first Christmas that he seemed genuinely concerned whether or not Santa would bring him his request. He has known about the "good list" and "naughty list" for quite some time now, but really paid attention to it the closer Christmas got.

He did feel good, though, knowing that Santa would bring Jack something because "Jack is a good boy, Mom." But, his erratic behavior caused some doubts in our precious 6 year old. Nothing like a little self-evaluation in your younger years.

So, the holiday arrives and Carter could not have been happier that Santa did, indeed, deliver his much-wanted Heely's to him. He's been waiting for months and even attempted at one time to save his allowance for them. That would have cost him more than half the year!

I love to hear him now...at the mall or with friends....announce, "I was on the good list. Look at what I got." He's barely taken them off since they arrived. Money well spent by Santa. 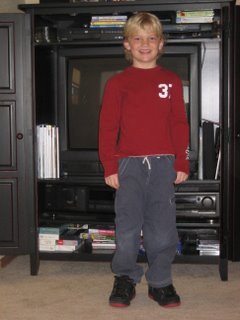 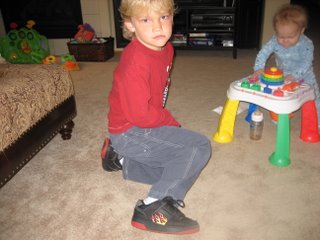 oh no, you've become the parent of a Heely Hellion. :O