For A Girl This Time

Since we're only 3 weeks away from our baby girl's arrival, we've been doing some last minute things to prepare. One project included going through all of Carter and Jack's baby clothes to see what I could use for Lainey.

I've been told that even with near perfect condition clothes, I won't put anything boyish on a girl once she arrives. They wear tapered jeans instead of straight, their shirts are cut differently, etc. I can definitely see that now in comparison, however, I did pull out some onesies, PJ's and a few other things to fill in the gaps. And, since Jack spit up more than any other baby on this earth ever has, we have an abundance of bibs should she do the same.

Upon looking, I found these navy blue shoes that I bought years ago just before Carter was born. I was so proud of them....thought they were darling....and FOR A BOY since they were blue and had squirrels on them.

My grandmother was in town from California at one point and so I dressed him up, squirrel shoes and all, for an outing. When she saw him in them, she burst out in laughter at the site of this baby boy in Mary Janes......explained to me what a fool I had been.....and insisted I take them off.

So, finally, we'll have a little girl to put them on. Sadly, my grandmother is no longer with us and although she's been gone for almost a year and a half, it still makes me extremely sad to think about. She was a big part of Carter's life. He still prays for her each night before bed. (GMom, Koppy, and Granny, too) I have a feeling, though, that she's looking down on us and will be more than thrilled to see these shoes finally on the right kiddo. 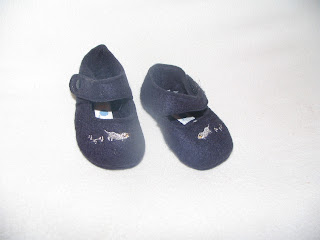 I love that you put those on Carter...that's a sweet story! Finally, a girl to dress up!