We've been watching the tracks behind our house carefully. Lots of deer in the area and they're spotted often later in the evening. We thought some of these could have been deer, but Blake is labeling them as squirrel instead. Deer sounds more exciting, no? 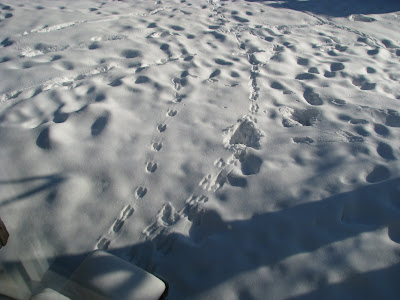 I took the kids to my first solo movie last week. Had to show this picture because you can see Jack's funky gloves. Couldn't find 2 that matched, so we improvised! 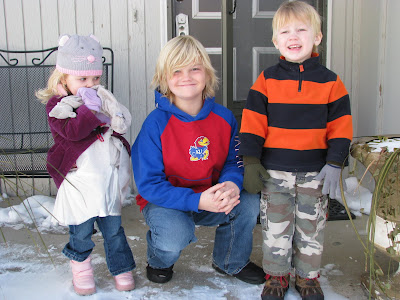 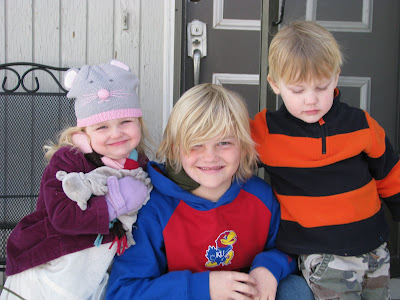 I want a mouse hat now. Love this look. 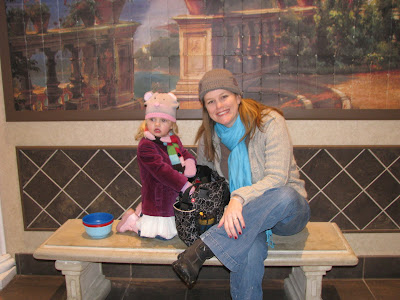 We saw The Squeakquel. Stayed in the theater the entire time and the kids loved it. I let them dance around the screen while the credits rolled. Yes, Lainey is wearing a skirt over her jeans. It's her "princess" and she insists on it now. 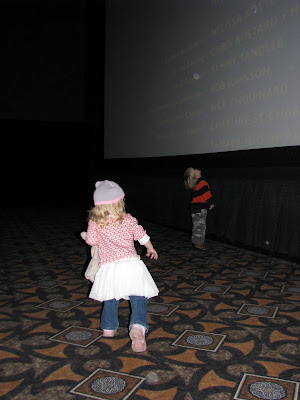 Snow is piled up throughout our town. Plows have to push it off the roads and parking lots, so it ends up in these mini-mountains everywhere. I heard on the news that Kansas City is incurring a ton of weather removal bills due to so much snow removal on Christmas (which means overtime pay). They've even had to go as far as relocating the snow b/c it's piled too high in some areas. Costly. 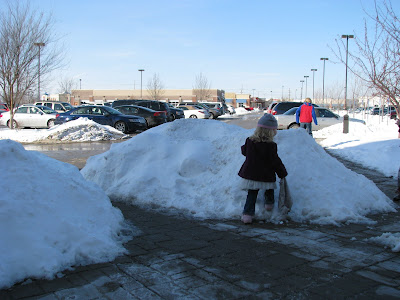 I am loving the cold weather, so you won't hear me complain. I promise I was raised in the south. I just enjoy living elsewhere! 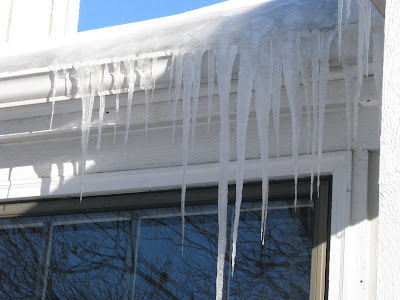 Our creek has frozen over.......this picture doesn't do it justice......it's beautiful. 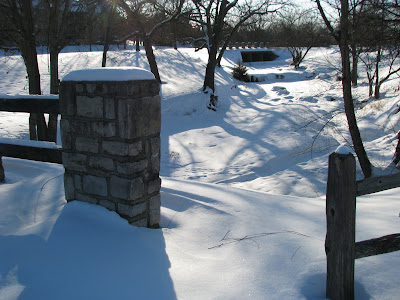 Back later with some answers. Questions are still rolling in, so I've been waiting for them to taper off. Lots of entertainment. I knew labeling this project as "candid" would open up opportunities for some rather snarky (and un-printable) inquiries, but you've gone above and beyond, ladies! Hilarious.

Many thought provoking, too, and I'm considering how to delicately answer the tougher ones. This is a great exercise for me.....to see where I'm lacking in the information I post. Some, I've been purposeful about and some, I have simply failed to inform on. Stay tuned!

Cute snow pictures! We are heading out to play in it this afternoon. It should be fun!

I can't wait for the questions and answers post! I am prepared to laugh my a$$ off! Please keep in mind -- my question was nice!

Glad you stepped to the other side of the camera. If I can do it, anyone can.

I love Lainey's fashion statement... skirt over jeans. It will probably catch on and she'll be responsible for the hottest fashion trend in 2010 :)

Have a question for you- I'm doing a post one of these days and I was wondering if I could "borrow" that photo you had up at Christmas of your kids strangling each other that said Let There Be Peace on Earth. I would of course link to you... but I thought it would be hysterical and perfect for my post. If so... you can email it to me... otherwise, no worries if you'd rather not. Just thought I would check.

You know I love this: "This is a great exercise for me.....to see where I'm lacking in the information I post. Some, I've been purposeful about and some, I have simply failed to inform on."

btw, none of my questions were normal. I haven't had this much fun in a while.

I love the mis-matched gloves! Gives character, right?
I'm excited to see the new chipmunks movie....looks funny! I hate posting pictures of myself too. But sometimes I force myself. I hate how critical I am of myself in photos, but I think we all are!! Yet another example of why I LOVE NieNie and how bold and proud of herself she is.

I might do you questions idea on my blog while I'm "off" this week and answer them next week. Fun!

I don't think I've ever seen your hair this long! It looks great!

cute pix. I'm with Blake. Deer tracks...little hoofs.
Love Lainey's hat and good for you on taking them all to a movie!

I think it's a great picture of you! It's so important for us to be in pics with our kids because they will love looking back to see how we've changed over the years too! I love looking at pics of my parents from when I was a kid. It's like seeing an entirely different part of who they are. =)

i think you look darling! and of course lainey too!

LL is begging me to see the squeakquel... we may wait for dvd though! i love the skirt/jean look! cute. :)

I want that mousie hat!!! Laine's party girl smile is too cute for words.
All of this snow is just crazy! I can't even see around some corners when I'm driving--and I'm sitting up pretty high nowadays. I love the big piles. Wish it weren't so cold so I could go explore them.
Can't WAIT for answers to questions. I want to do this sometime in the future!

I love Miss Lainey's hat!!! So cute. And that's a great picture of you!

That is a great pic of you - I can never pull off a hat - you look great in one!