A whole lot of random today.

First, a few of you wanted to know how we roast veggies in the Starnes casa. Easy peasy. I buy fresh broccoli, green beans, cauliflower, squash, etc.......just about anything works except for potatoes.

Chop up the pieces and lay them out on a cookie sheet. I know yours looks better than mine. It's clean. I promise. 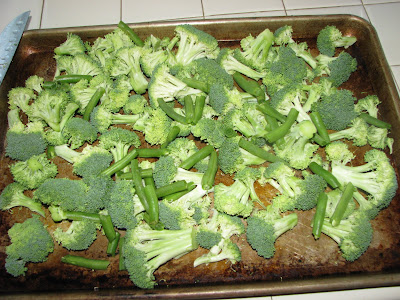 Toss with a tiny amount of olive oil. Add salt and pepper to taste.

Then, add some good Parmesan. And, a fair amount of it. 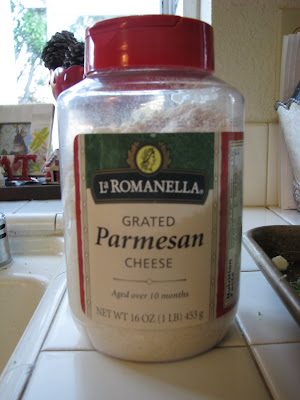 Cook in a 375 degree oven for about 15-20 minutes. The Parmesan will brown a bit when ready. 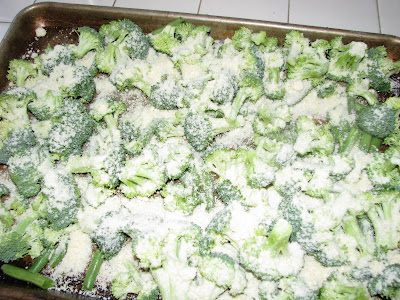 Yum. I eat this as a meal by itself sometimes. 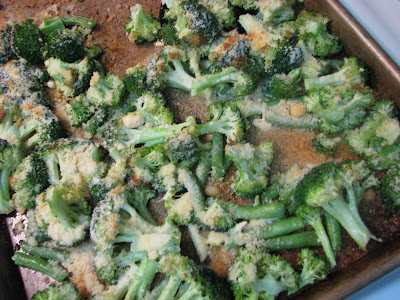 Trying a Countdown to Christmas chain this year. Starnes Family Advent calendar will be created tomorrow! 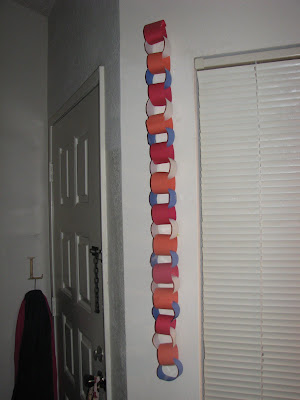 Here's an update on the tree. Jackass Blake put the train at the top and refuses to move it. Looks like the space needle in Seattle. Awesome. 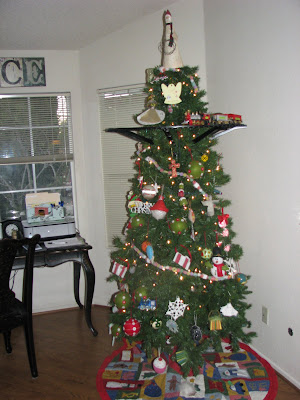 I received our first card today. First! And, it's not even December. Guess I need to get started on repairing our wreath. I lose clothes pins each year during storage. 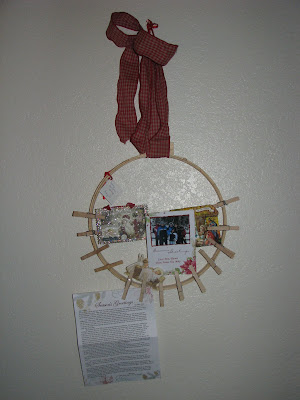 Tacky Santa is back. You love it. 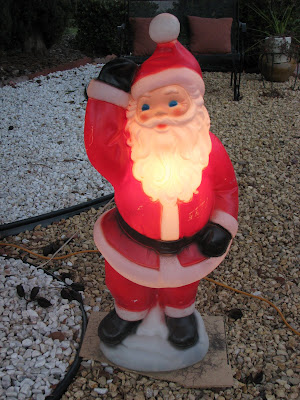 This year, I'm so happy to see Jack and Lainey hanging their own ornaments, made last year at church. 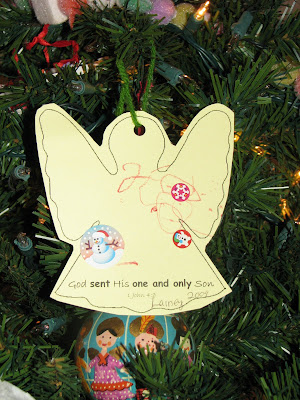 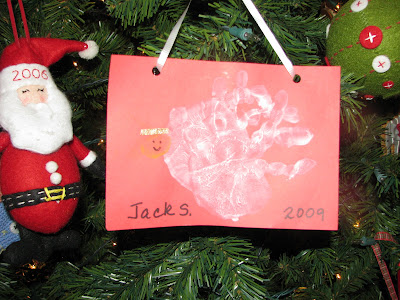 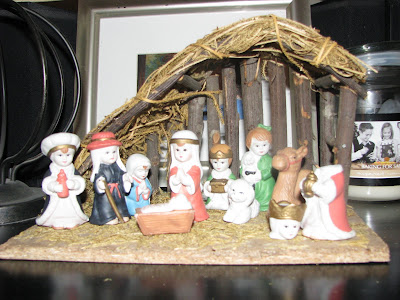 My favorite table runner is in place. 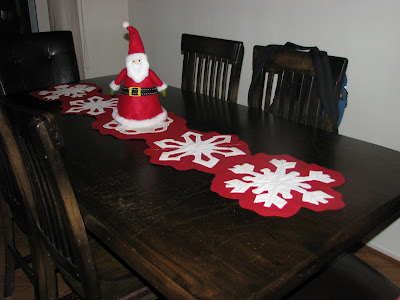 And, a few special trinkets are scattered around the house, rather than hung on the tree.

My favorite duo from Playa del Carmen, Mexico. And, the little house is from Santa's Workshop in Cascade, Colorado. Notice my bird house salt & pepper shakers, too. Out year round......love them.....Jann gave them to me just before we moved to California. Thanks, Jann! 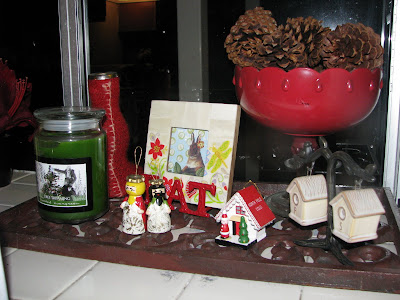 Blake's favorite, no doubt.......the cheap Polaroid of a baby Batman, baby Jack and 5 year old Carter from Christmas in 2006. 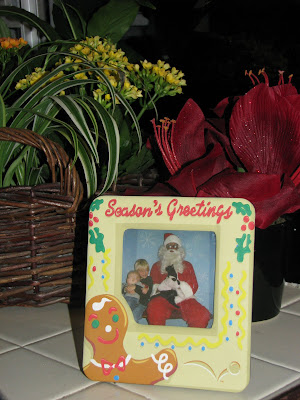 Preschool is going well, folks. Proud of our youngest 2. Both are behaving and learning lots. No cries or hesitation upon entering. They're having too much fun to miss Mom. 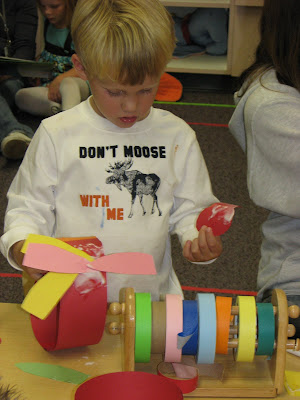 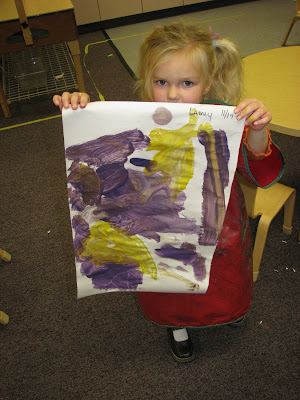 Jack did tell the teacher yesterday, "You're dead!" when she declined giving him another bag of crackers at snack time. Lots of "dead" talk around her recently due to the snail casualties after it rains. That being said, if he had remarked, "You're dead to me", I would have been totally impressed. Where's my Mom of the Year trophy? 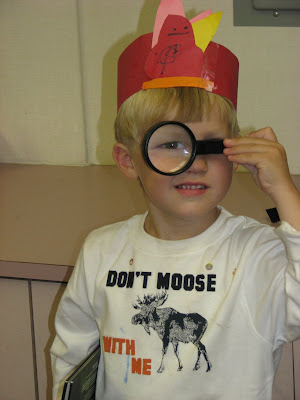 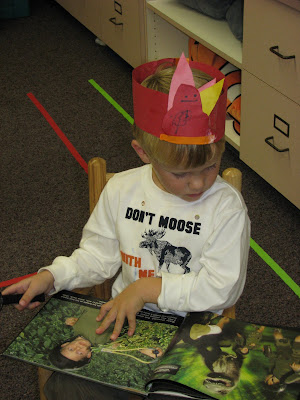 Missed this little story while posting on Caroline's visit.

We were running around the house preparing for our second day at Disneyland and the two little ones were playing together. They've been doing so well lately and actually going 30ish minutes without a fight or blood drawn. So, after a while, I ran back to Caroline and proudly said, "Jack and Lainey have been playing for 45 minutes. Progress!"

Guess I should have checked the bathroom first.

Another baptism. What you can't see in these pictures is the inch of water on the floor and soaked mats, towels, etc. 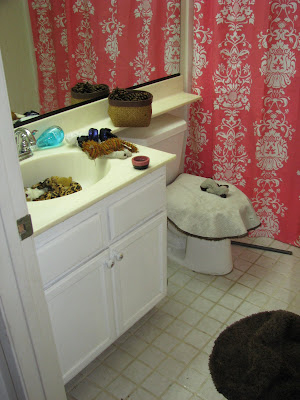 Love how they used the soy sauce cup from their sushi set to pour the water over the kitties' heads. 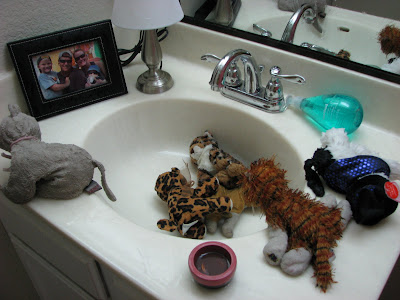 I believe this makes Sassy Kitty the sacrificial lamb. Jack and Lainey are so spiritual. 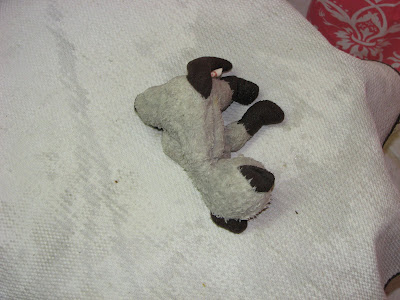 ***I'm finally catching up on Parenthood. Been weeks behind. I'm really terrible at keeping up with TV shows. Modern Family and The Office are next on my list.

***While we're on Parenthood, is it inappropriate to STILL have a lifelong crush on Hayden Fox Craig T. Nelson? I've loved him since Poltergeist and the man can do no wrong.

***Reading The Almost Moon right now. Alice Sebold's. Good Lord, it's odd. Anyone read it? I loved her memoir, Lucky. And, of course, The Lovely Bones.

***Dying to read Cutting for Stone. That's my next one. Hopefully will start it this weekend. I'm so sad without Half Price Books out here in California. Need to find a discount used book store.

At least the little ones are getting something out of church! Love your space needle tree! My Mam-ma had those tacky Santas - she probably still does, never throws anything away!!

The train up high ... laughed out loud at that one!! So funny!

I love getting out all the Christmas decorations and deciding where to put them. They have been in three different houses the last 3 Christmas'.

This is the busiest, craziest, stressful, but most wonderful time of the year. You look like you are enjoying it all already and staying just as busy as ever!

The train is laughable! That's one to keep for the scrapbooks and bust out when the kids and Blake are older! The pictures of the kids are too cute at preschool.
Also, I need to figure out a cool way to display my cards this year. Maybe I'll copy you!

The animal baptisms are cracking me up! They are so spiritual. LOL

I love all of your decor...even the space needle on your tree. I had no idea those were "in" this year. Tacky Santa is a rockstar. I need one...everyone needs one.

I LOVE Modern Family...you need to catch up, there have some funny episodes. It cracks me up the way Phil looks at the camera.

Hope you're having a great week so far!♥

So happy the little ones are enjoying preschool. Are you loving your time alone?!

The train up high on the tree is the best. At least then no one can touch it, so , that might be the safest place for it.

Your posts always leave me smiling! Except the whole Craig T. Nelson thing. I'm not sure what to say about that.

Your veggie thingy sounds awesome. I WILL be trying it. I bet Emma would love it too!

I barely got a Christmas tree up. I can't think of even making chains or an advent calendar. Ugh.

How's the shopping going for my Christmas gift? Just checking.

I miss reading books. I kinda suck at reading blogs lately. My father in law has been a houseguest for a week and just told me tonight he may stay another 2 weeks. OMG.

Ok...I've stalked your page enough for one day. I'll see what you have tomorrow.

Your veggies look soooo good! I probably could even handle making those!

The tacky Santa is a hoot! Everyone needs one of those!

Love the old Christmas picture too!

It totally does look like space needle. Cracked up...love that Blake won't move it (don't budge Blake...leave it!)

baptism=hilarious. reminds of the time that my mom would tell us that my sister and i would pretend to give birth while driving 6 hours to visit my grandma! why do kids do weird things!

Casey, I love reading your blog! I often catch myself laughing out loud! You really should write a novel...Big bucks, lady! :-)

I have read The Almost Moon. It was a very uncomfortable read for me, but I read it anyway hoping for an ending that would redeem the time I put into reading it. You'll have to tell me what you think when you finish it.

WTH do I start?
1. The train.
Nice one, Blake. That has got to be driving poor Jack out of his mind not being able to touch it.

2. That old pic of the kids and Santa with Batman. Love it.

3. Love that Jack and Lainey are thriving in preschool...regardless of Jack's death threats.

4. Going to look for Cutting for Stone today.

5. AND I am going to the store this morning, and making those veggies for dinner tonight.

6. I was wondering when I was getting my advent calendars for the kids this year. =)

7. Watch the mail for a little jewel for your fam.

The library is just now becoming an option for me b/c Jack and Lainey go to school and before, bringing them in + searching for books became a complete nightmare.

I'm seriously craving that veggie tray with parm and I just got back from the store! Ugh. I'll remember next time.

Don't Moose With Me? I want that shirt in size Sass please. Thanks.
Loving the veggies- the girls love parm, I'll have to try!
Train on the tree...totally space needle. Jackass Blake never fails, does he?
Sacrificial Sassy Kitty. Bless her heart. They are so spiritual. And I secretly love tacky Santa. But won't admit it on Facebook. Don't tell.
MISS YOU!

I've totally been MIA from the blogging world lately and have had so much fun catching up on yours. I know you know this, but I will tell you again. I LOVE YOUR BLOG! So dang funny.