Caroline arrived last night and although it was far past the kids' bedtimes, we loaded up the car to go greet her at the airport. It was planned that Blake would pick her up, as he arrived on a flight just before her plane landed, but that didn't feel right. We wanted to be there, too!

We had an eventful drive out there....almost hit a HUGE deer on the way. It was terrifying. As I told Caroline.....they can do serious damage to your car (and you!) and they are typically not insured.

A picture of Carter and Caroline at the airport. Our living so far away from friends and family has made us now love and loathe the airport....nothing more fun than going to pick up out of town guests.....but so heartbreaking knowing we have to return them eventually.

Carter turns 7 today and we're packing right now for a surprise trip out of town. He has no idea. Many pictures already to post and we'll soon have more......back on Monday with some photos. Have a great weekend! 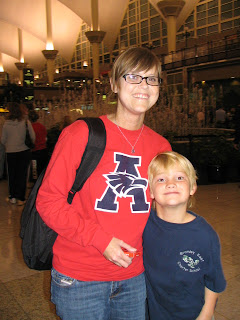