Our attempts at improving our Christmas tree certainly didn't do a lot. As previously stated, the decorators (besides Caroline) are all under 4 feet tall and prefer to load up each branch with as many ornaments as they can. To test the strength of the tree? To group them in sets? No idea.

Our old tree had been passed down to us by my parents. They had used it for a few years and it was a fine tree, but years of fluffing and de-fluffing made it so sparse that you could see straight through it at any given angle. Plus, a lightbulb went off above my head recently and I thought it would be nice to avoid the usual profanities thrown out during our tree decorating evening by the children's father.....all in a fit because he has to wrap a strand of lights around some branches. Asking such a task of this man has proven to send him over the edge on more than one occassion.

So, our new, fancy tree is pre-lit, like most people have and all you have to do is plug it in. Genius.

Our new tree has one special feature that I bet you all don't have, though. It spins. Blake couldn't get some pin in the bottom of the base, and we didn't think much of it at the time.....and not until we noticed that the "Santa Angel" at the top was facing in the wrong direction. And, all of the sweet, hand-made ornaments that I put near the top to avoid little hands breaking, were all facing the wrong way. It seems as though Jack or Batman....neither accepting responsibility at this point.....take hold of the tree, walk in one direction, and the tree follows.

We offered our old tree to Caroline to take to home and put up in her new house she closes on in a few days. We threw in some ornaments and garland and she really seemed to be excited about the aquisition. Until she saw the box - wrapped heavily in duct tape and torn in several places. She actually laughed out loud at the sight and then suggested buying her own tree....no hard feelings.

So, now we have a tree in our basement and it will soon be donated to the Denver Rescue Mission.....unless I hear from a higher bidder before Saturday.

A couple of pictures (secretly intended for Natalie) of the new tree and Batman. 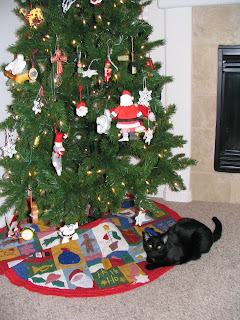 So far, he hasn't been able to get his chubby body up into the tree as he did last year. He has, however, picked out a few favorite ornaments and chases them throughout the house. 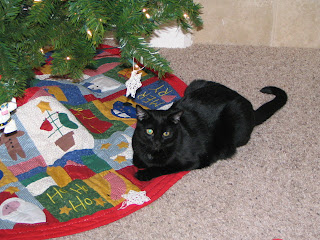