Let's start this week off with a doozy. I dropped my Blackberry in the toilet last week. For real. It happens. 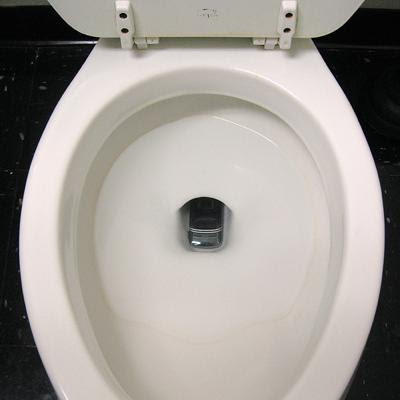 So, I've been without text for much too long.....something I never thought I'd say.....but I have people like this depending on me each day. She's a wreck without me, y'all. 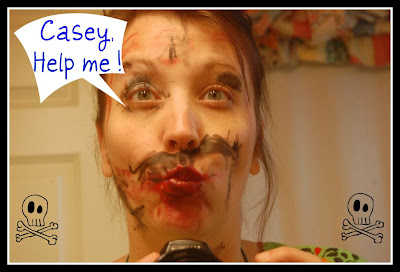 Made monkey bread for the first time in a long time recently. Delicious, sugary bliss. 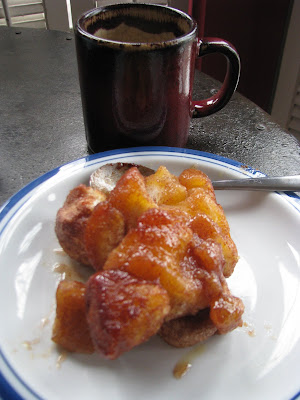 This week's You Tell Me winner is Becca Jane with:

"One of these things is not like the others!"

I was immediately pulled back to Sesame Street days and was singing the song in my head for hours. Wasn't that the show?

Lainey now walks Meow Meow on a leash around the house. Every day. Several times a day. Guessing Batman is next. 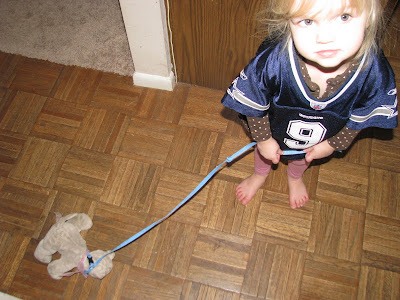 Evenings often look like this at the Starnes house. Usually, no one gets hurt. Some one's always crying......don't get me wrong......but typically, we're without injury. 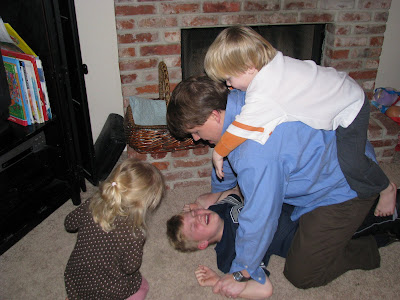 Took the kids to the Great Mall of the Plains yesterday and we checked out the Firefighter Museum. 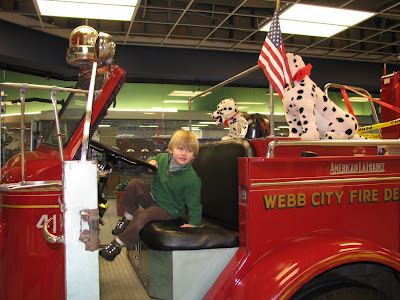 Driving the truck is pretty cool. And, if you can pull it off with stripey tights, it's even better. 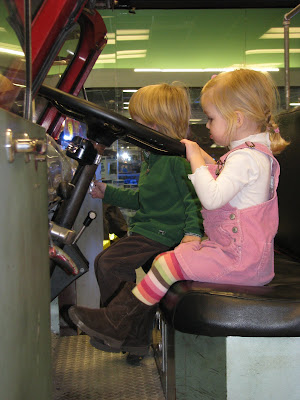 Valentine's Day is over. Mardi Gras came and went. Lent has started and we're headed toward Easter. Decorations are up! 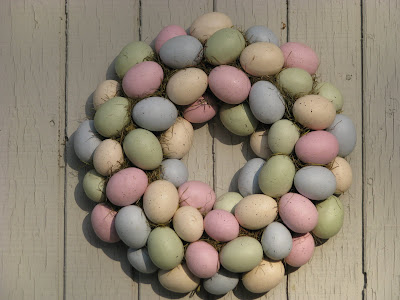 As soon as I put our bunny out, Lainey claimed her as her own. She now feeds her, dresses her and puts her down for nap each day.

And, again.....Jack is not growing a mustache. It's the winter chap he's so fond of. 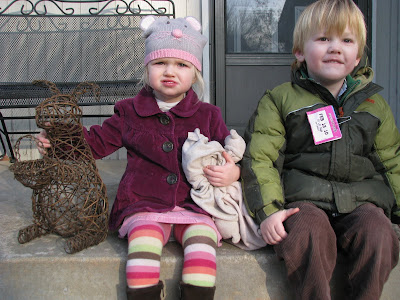 To make the chap worse, we ventured outside to join Carter in a game of basketball. 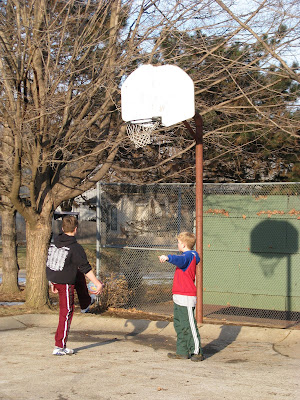 But, quickly switched directions and headed toward the playground. 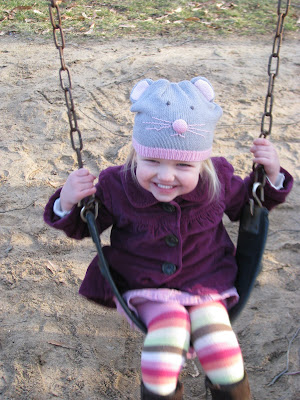 Back to the court. Jack joined in. 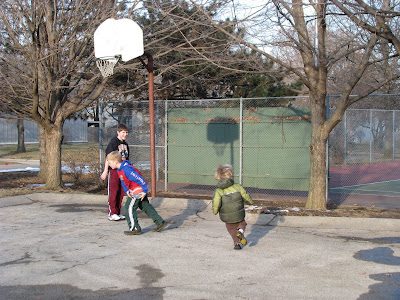 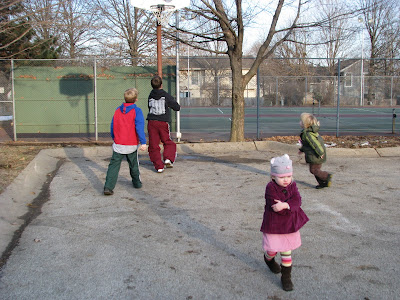 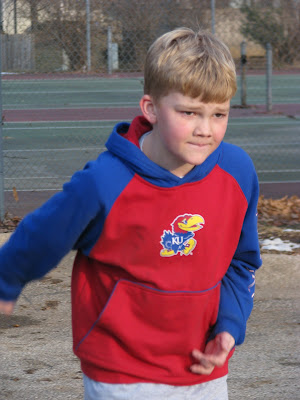 Plans for the weekend? I think we're hitting the slopes again.

Hope you have a good one!

Awesome. Yes, I am at a loss. I need your every move or I am not complete!

I dropped my iphone in the toilet back in Sept.! Hadn't even had the thing 6 weeks. It slipped right out of my back pocket when I bent down to use the potty! Yeppers, lots of fun. My phone did work, you just couldn't see the screen.

The monkey bread looks AWESOME!! Yummy. Makes me want to go look up a recipe and make some for myself.

Have fun on slopes! Ashlyn starts ski lessons tomorrow. Since B & I have NEVER been skiing we decided we should let professionals teach what we have no clue about. One day we will be a family on the slopes like you guys!

I didn't read the rest of the post because I am laughing my ass off at the first two pictures and comments. That is some funny stuff Casey!

Blackberry in a toilet...I think my hubby would like it if I dropped my laptop in the toilet.

blackberry in toilet = NOT awesome.

i will be doing homework all weekend...boo!

Anything Fits A Naked Man said...

Oooh, your blog is sooo pretty! I'm a huge bird lover, so I was attracted to your lovely template, then I read the contents, and now I'm laughing!!! Thanks for sharing these pics of your gorgeous family!

I'm so glad I found you! I'm your newest follower!

When I saw the toilet photo, I knew I was in for a good laugh, and you did not disappoint.

Have a good weekend!

I hope you get a new phone soon. I would seriously cry if I dropped my blackberry in the toilet.

I love the stripey tights!

So jealous you'll be out on the slopes... wish I was going skiing!!

Do you need a blackberry?? I have two sitting in my kitchen drawer but they only work with Sprint I think... well, let me know.

Okay- I should study... not likely, but I should. Happy weekend!!

Knock on wood I've never dropped a phone in the toilet. I've heard though if you put it in a bowl of rice right away it will dry out and work! That monkey bread looks yummy. Seems like y'all had fun playing outside! Have a fun weekend whatever y'all do!

I recently dropped my phone in the toilet and so did my brother...must be something in the water :)

That monkey bread looks yummy and I'm not usually a sweet eater. I love all things salty!

Oh Casey--this was perfect for me to read tonight. My son climbed into the toliet with all of his favorite things. It was one of those days. I would cry if my phone was in there---but I am a glass half full kind of gal and at least there was no poop in there!

Oh yay, I 'won'!! Go me! :)
Haha, the phone in the toilet cracked me up. It probably didn't crack you up though....
Thank you for all of your sweet comments on my blog. They always make my day. Maybe someday, we will get to meet.....

So sorry to hear about your Blackberry. The last thing I accidently dropped down the toilet was a pair of glasses. We had to call a plumber. It wasn't a pretty sight!

Hope you have a great weekeend!

I've been wondering what you decided to do about the phone in the toilet??? Did you get a new one?

Love all the pics. Lainey's hat is precious. And Jack's mustache....at least you know what he'll look like with one now.

Have fun on the slopes again!!

p.s Get some video of Carter snowboarding!! Want to see his skillz!!

Try this one. While at scout camp they have only vaulted toilets and I was carrying the scouting checkbook because I'm the treasurer and was going to pay for some merit badge stuff and all. Anyways, I put it in my back pocket, was hiking with the guys, found an old toilet, had to go, did, got back to camp (about 5 miles later) and found out I lost the checkbook. I went for the hike again, couldn't find that darn thing, was in tears, worried and all and decided to walk it once more and check "everywhere" and guess where that darn thing was, yep right in the toilet. I had to admit I lost it, had to ask for help to get it and I am so glad I used a toilet that hadn't been used in ages because the maintance man got it and gave it back and it wasn't even too gross. Lesson learned, don't put junk in your back pocket it falls out. To make matters more embarrasing, they gave me a prize for the most embarrasing adventure. Oh goody not only did my troop know but so did 10 other ones.
Swimming with your cell phone isn't good, neither is dropping it in the duck pond. Cameras don't make it dropping to the bottom of a lake either. See why Jim won't buy me anything else, I'm to dumb not to take care of what I have, at least that's what he says. I'm not dumb, just not smart!! :o)

Ok, my son and my mom think that Lainey looks likes Sophie. Christopher thought she was Sophie, that Pa was my dad Pop and continued to ask me where Christopher was in the photos. We actually have the same brown dress she's wearing and the purple velvet coat. Really funny!!

Love the pics and the stripey tights! Not lovin the blackberry in the toilet though :) Monkey bread is evil....Evil I say! But Oh So YUM!

So ready to come visit!

Fun post! I hope you are having fun on the slopes. I am enjoying the snow here nothing else too exciting!

I too have dropped my cell phone in the toilet - yes it does happen - hate to admit it but it does! Love Lainey's tights - we have them too!! As always - such cute pics. We need to pull out the Easter decorations too.

dont lie, you did it on purpose to get a new phone....we've all done it. but didn't you once say you were thinking of getting rid of your blackberry so that you would not be so accessable? love the tights on Lainey!!

In the toilet?! Can't say I've ever done that. But I've lost 2 phones to glasses of vodka redbull. Don't ask.
Love your Scoops. Miss those beebees. Even the biggest one! Well, Carter, not Blake.
Lainey's learning valuable lessons: pulling off anything and looking cute doing it.
Also, Jack's mustache is HAWT. Way hotter than Coco's.

EEEWW. BB in toilet? bleh!! Hope you had a nice weekend!!