I think I slept a total of 20 minutes last night, so this will be brief. Tired or not, we're here!

Prior to departure, I worked on collecting items for the kids' carry-ons for about a month. Needed lots to keep them busy and behaving on the plane. 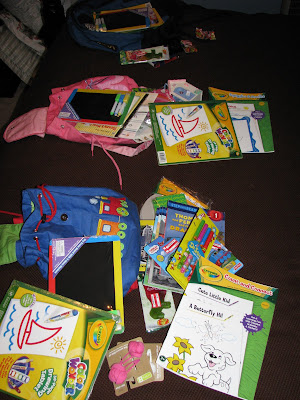 At the airport, this morning around 7am. We parked off site in covered parking.......as I fear hail storms more than tornadoes and the wicked witch in Kansas......so we arrived early to secure our spot.

5 people
4 large bags to check (which we had to eventually redistribute, weight wise to accommodate the 50 pound limit......even after weighing them at home last night)
4 carry on backpacks
my large purse
Lainey's entourage: Jo Jo the kitty, Meow Meow and 3 lambies
Jack's polar bear
2 car seats
My double stroller 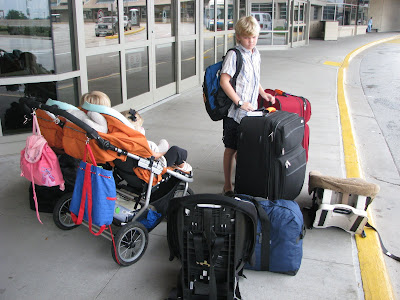 The kids love to guess which animal is on the tail.....since we fly Frontier more than other airlines. Today was a bighorn sheep and then an elk. 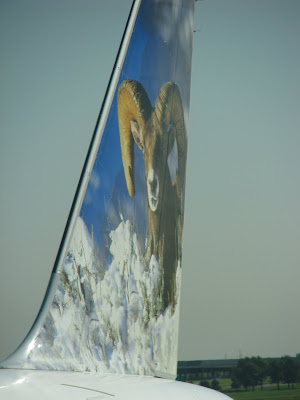 On the plane! Car seats made all the difference. Kids feel secure and "in their norm". 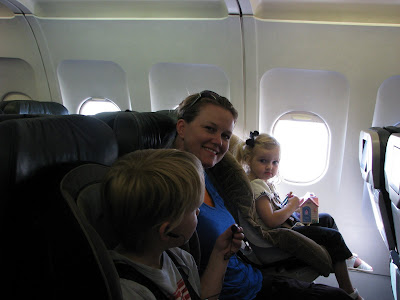 Lainey with one of her new treasures. A tiny doll house. Kept her busy for a long time. 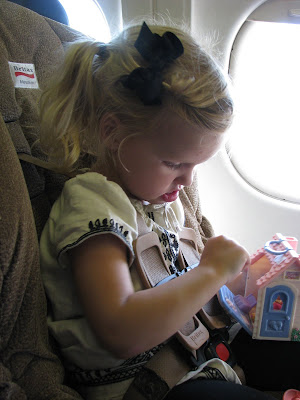 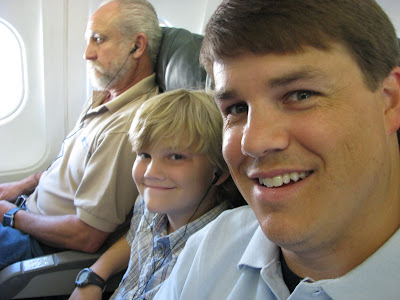 Our smartest child immediately got off the plane and buckled herself into her seat in the terminal. I don't know. 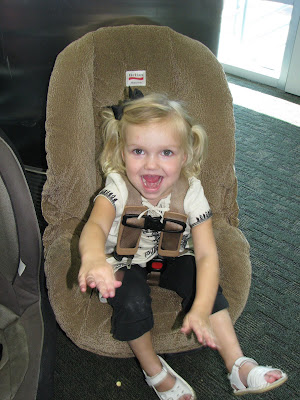 Then, she spun some records. 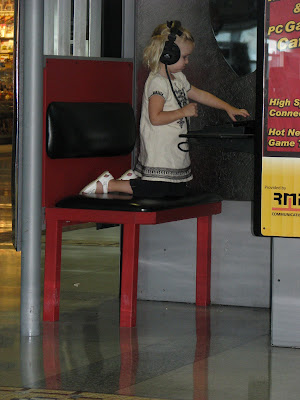 We connected in Denver, so it was fun to see the Rockies again and the airport is fabulous......unlike KCI......which is a glorified gerbil cage, at best. 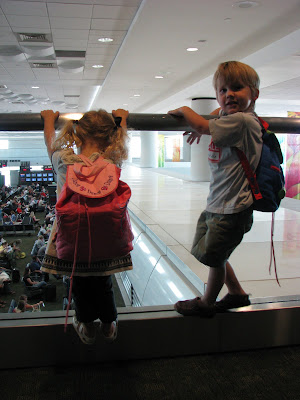 Second leg went well. 4/5 Starnes folks were asleep after take off. We all slept most of the flight. Nice. And, no cocktails! For us or the kids! That's impressive, people. 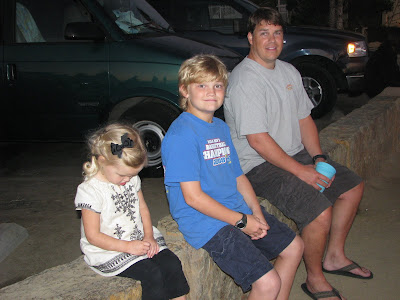 Took a short walk down to Windansea Beach to watch the surfers. 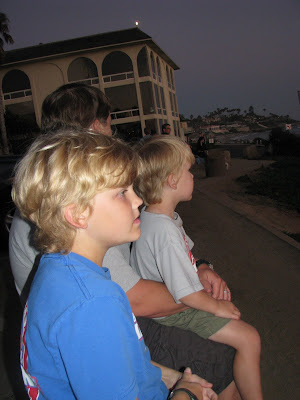 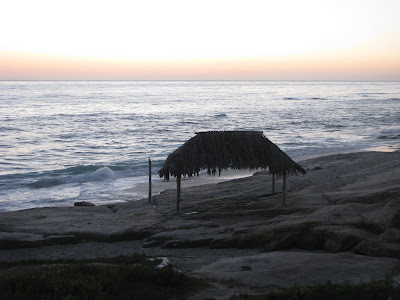 Kids were more than antsy to hit the sand, but we're waiting. They're exhausted.....and technically still on Kansas time......so they need rest before we dive right in.

I love the Denver Airport

Yay...you're here! Have fun. Lucky you, our weather just warmed up a bit but it's still not blazing hot. (I ordered the weather just for you) ;)

How are you have time to do this? We were gone for a week and i didn't touch my blog and barely touched the computer period. I am highly impressed!!! I hope you guys have a great week.

Glad y'all made it. Love Jack's train back pack. Where did you get it?

Love the airport entourage--whenever we go on vacation it looks exactly the same way, I am sure the airport workers all talk about us as we walk past with far too much paraphenalia for just a few short weeks! Although, I usually don't have such fun things to keep me entertained. Enjoy your time at the beach with the punks,your hubby, and your sister! Can't wait to hear all about your adventures.

P.S. We always take a trip to Costo/Grocery Store as soon was we get settled in too. And spend about the same too! Beach snacks and goodies are pricey! :)

This looks so beautiful - I am so jealous - can't wait to read your daily updates and live vicariously through your vacation!

I always HATED going to the grocery store right after we get somewhere! BUT you have to...never a good time so just get it done and over with first thing!!

Can't wait to see you guys in a couple of days!

I hear La Jolla...awesome..awesome.. one of my besties lives in Cardiff by the Sea.

VERY impressed that there were no cocktails! Those punks must've been on their best behavior ever.

Have fun at the beach today!! Can't wait to see more pics.

"...and then she spun some records." Cracking up. Oh Laine.
I cannot BELIEVE your cargo! It all makes sense though. We stop at the grocery store, too, for two little picky eaters I know :)
Have so much fun!!!! Tell Jack there there will be no trains coming through Kansas until he gets back. I made sure of it.

Lauren, I did this last year and it's much easier for me......than try to remember stuff when I return.

Susan, the backpack is a Stephen Joseph........made by an old friend of mine from Louisiana. Google Stephen Joseph and you'll find them in specialty stores/boutiques.

I am with you on the kids in the carseats on the plane! Glad everything was uneventful and hope you have a fab day at the beach today!!

Was just at that airport!

Looks like the fun has begun! Go hit the waves!

It looks beautiful! I want to go. I am jealous. Looks like all your planning paid off. No drinks? Wow! Enjoy!

Looks like fun.
The Bowens will be joining y'all next year for sure!!!

oh my gosh -- awesome!!
well, no surprise- but you did a great job pre-planning. i commend you super mom!

meant to mention, one of our friends from hub's old program is now at scripps for 2 years! he's a born and bred south la man with a large fam... i am sure they are enjoying la jolla. (we considered the move as well!) so much to DO!

y'all have a blast, i am sure you will!! everyone catch a wave for us!

we are taking a 2 week road trip so i've been planning for activities too.

i love flying frontier! i flew it forever ago and they had us laughing. don't know if they are still funny or not.

that beach looks awesome. hope to visit the west coast ones one day. although i hear you can't beat ours.

1 day I MUST travel with you, or at least have you plan my trip!!! Looks like Blake had the good seat on the plane, you drew the short straw

It looks like your vacation is off to a great start! I can't wait to see beach pictures!

We have never flown w/ all the boys and after hearing what all you had to pack I'm a little scared to now! Ha! Hope y'all have a good time. Can't wait to hear all about it!

Living vicariously through you!!! Y'all have a blast. We will enjoy the updates!
Did the flight attendants let you stay in that middle seat, between the 2 carseats??? Shouldn't have. It's an FAA regulation! ;) (You were impeded from exiting the row by the carseat/Jack) (I know, I'm a dork!)

Jann - you're welcome any time!

Heather - love your insider knowledge. Yes, I flew in between them on the first leg and then on the second, each carseat was near a window. Guess the second flight's crew was stricter!

Cool pics! And helpful!!!! I am flying with Tristan (6) next week to NY and I was going to put his booster (just the bottom) underneath the seat because we need it for the rental car but I see I could probably just have him sit on it on the plane.