So, here's the deal. I like nice baby gear. I have tried cheaper versions of what I really want and we tear through them. I don't know if it's because we use it more often than most or because I'm raising Tasmanian Devils, but it's the truth.

I've had two double strollers since Lainey arrived and can rationalize both purchases well. The front-to-back was used at the beginning because it held the travel system and accommodated a newborn. Lainey arrived in September and with the holiday season starting a few weeks after, I had to be prepared.

Then, I drove the front-to-back version and realized that the side-by-side had its advantages, too. Enter, our second double stroller. I've used this one much more than the first, but the carriage is now ripped and the wheels barely turn.

Now that I have 3 children and this is the last piece of baby gear I will likely ever buy (promise, Blake!), I have learned my lesson. Not every one's lesson....mine. Buy the pricey stuff to begin with.

So, I figure I will have 2 more years with a stroller and will certainly get my money's worth with this new ride that I couldn't be happier with. However, when it arrived, it looked like this: 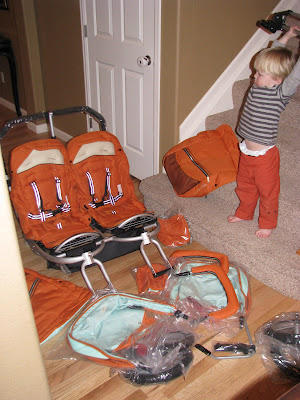 So, after about an hour of cursing and sweating and near tears (I'm terrible at assembly), I managed to push this bad boy around the house and it was magical. 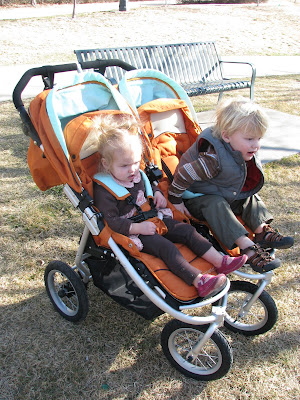 I linked to the site where you can see the fancy features. I think all we're missing at this point is a DVD player and valet parking. In another lifetime, I suppose. If you go on the site and look at the price, I have no sympathy for you. It's your own dumb fault. No one needs to know.

I promise! It's my last purchase! And, for the record....to rationalize....I'm the most low maintenance woman on this planet. I don't do my nails. Never had a manicure or a pedicure. No massages or facials or expensive makeup. I take care of myself, but on a budget and would much rather put my money into a ridiculous purchase like this. 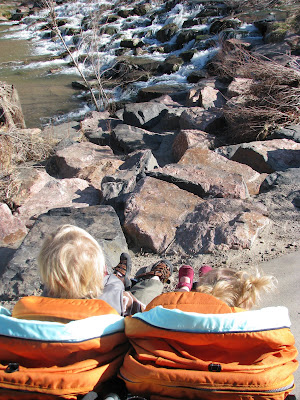 We took it out for a spin through Cherry Creek North this morning and it was heavenly. She is a beauty, isn't she? 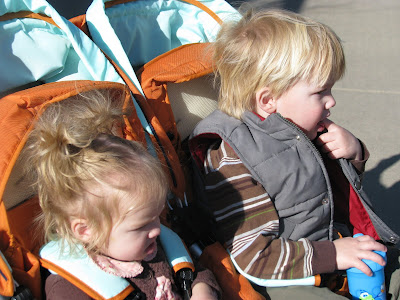 Email ThisBlogThis!Share to TwitterShare to FacebookShare to Pinterest
Labels: Jack and Lainey

That is some ride you got there! I love the color! Fancy Mama!

You are too funny! You go girl!

Oh I love it. Those colors are perfect!!!!

We are going to be quite a sight next time we are together wheeling around our mack daddy orange strollers.

Now that is sweet! Love those colors! Very nice! You deserve it!

I love strollers. I feel the same way about my orange Bob Revolution.

I almost bought the orange Bob, but didn't want to give anyone the impression that I might use it for jogging or anything that would suggest I'm in shape. I have to keep my expectations low, you know?

nothing wrong with quality, that's for sure! it's CUTE too!

Love it! Does it come in a single version? I already have 3 strollers and only one child so I don't guess I need a 4th. I love the orange color, but I'm always drawn to green ones for some reason.

Check the site, Malinda. There is a single.....this is the Indie Double....there is a regular version.

And, in a darling green!!! I almost got that one.

Totally worth the $. I love good baby gear.

Check out the Queen B. Revised sit up pram style. I think I love the name as much as the style.

No, no, Courtney...I didn't let Bram tear it apart. He became extremely upset that you had left him with someone he barely knew in a crowded mall during the holidays....he looked me straight in the eyes and said, "Watch this...I'll show her."

You two will look cute with your matching strollers...Case, just rip something off of yours so they match :)

True, very true Monica. But you looked trustworthy so I figured why not.

If you decided to kidnap him, you would of brought him back in 10 minutes..