In the past few years, he's played football in the fall - both flag and tackle - and we felt like switching things up this year. So glad we did. 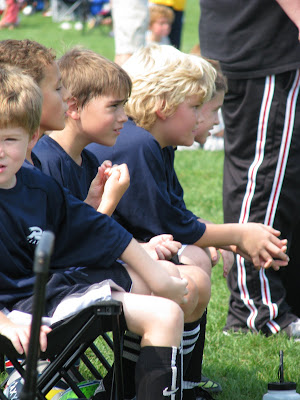 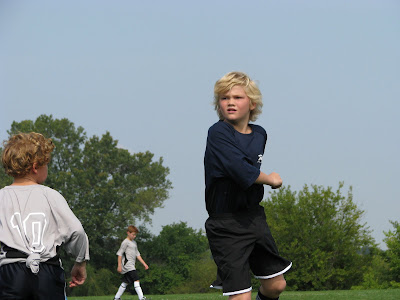 That is a Casey profile if I've ever seen one. 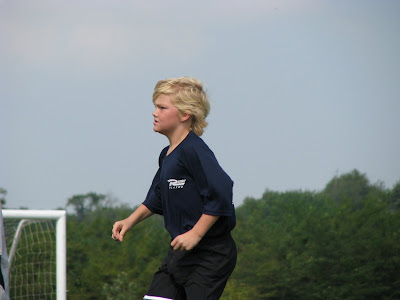 Soccer is a fun change from football where sports got serious quickly. Not sure we should be so serious when he's still this young. 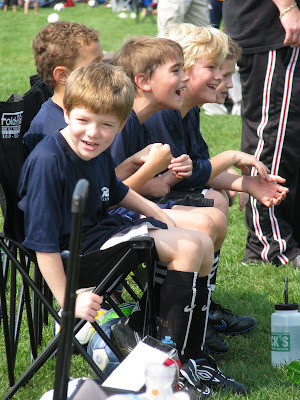 And, to our delight, he's really good at it! We had nothing to go on because 3 year old soccer consists of picking grass and watching airplanes fly over. But, Carter has some skills. Here he is after his first goal.....one of the only two scored today in their season opener. 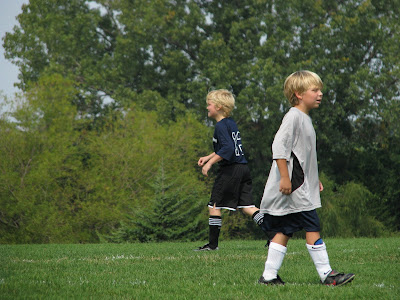 Lainey missed it all because her dog had to eat. "Puppy hondy, Mama!" Priorities, people.

Back to the game.....he comes alive on the field......rallying his team and cheering his teammates on. I'm so happy he's having so much fun. 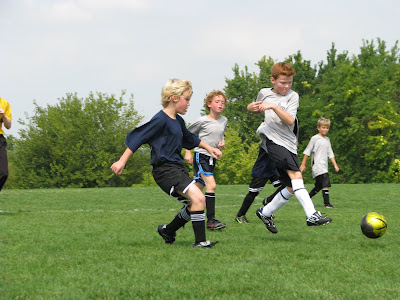 The crew post-game. Yes, Jack's shoes are on the wrong feet. He prefers them that way. 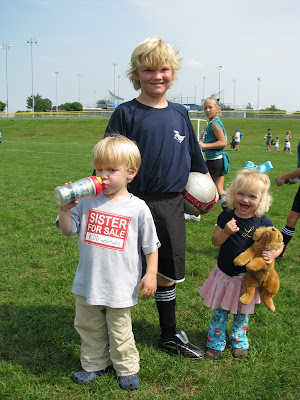 Email ThisBlogThis!Share to TwitterShare to FacebookShare to Pinterest
Labels: Sports

GOAL!!!!! Looks like a blast and what a great age to actually figure it out. We are getting ready to start Connor is something, the grass picking and plane watching as you said! ha!! Happy Birthday to Lainey, can't believe she's 2-time for another baby Casey. And the costumes-such fun. We keep all of ours in a dress up toy box-you never know when the mood will strike.

My Dad always coached our teams for soccer and softball. Sports was never my thing but I loved spending Saturdays at the ball parks. My Mom even ran the consession stand. So when they finally realized I was not athletically talented I got to help her with that. It was so much fun!!! It looks like you all have a little pro on your hands!!

Love it. Carter is such a stud. He's good at anything he does....all the way from sports to being a big brother.

Awesome - he looks like he's having so much fun! Soccer really is a great sport for kids - all three of ours have played and they all love it. Corbin has has first game this coming weekend and he can hardly wait - 6 years of watching your brothers play soccer will do that to you!

Way to go, Carter! He does look so mature in these pictures--I love the first one. What a great kid he is!