I've saved the funny stuff for Coco to post and I'm doing the official play-by-play. Yes, we discussed how we'd fill you guys in. Otherwise, you'd be bored to tears with 2 versions of the same story. Totally lame.

Overall, the kids did really well together. Tessie Mayes and Lainey created their own language, cleverly attempting at times to out-smart us. Fail. Bram was smitten with Carter and they got along well. Jack......precious Jack......is 1. a weird kid and 2. at that awkward three year old stage where he doesn't have the social etiquette to blend in. So, Bram was annoyed with him at times and Tess, frightened.

The circus arrived late Thursday night. I had my 3 in bed in hopes of a smooth transition in.....her 2 worn out and ready to sleep......so that we could get down to the very serious business of drinking wine and chatting. Mission accomplished. Until 2am.

For me.....a super cute sap bucket full of goodies. Cupcake wine, an Orleans candle, birdy hooks for my wall, etc, etc. LOVE it. Jen sent 2 Christmas wine glasses for each of us and a bottle of wine.....which Coco insisted she broke in the car last week. I think we all know that bottle was not broken, but drunk instead. Forgiven. 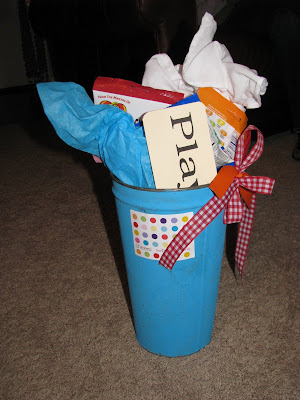 For the kids.....same idea......but alcohol-free and child-friendly. Carter scored a t-shirt, which he proudly wore to school the next day. Also, a whoopie cushion and some fake bloody scabs. Nice. 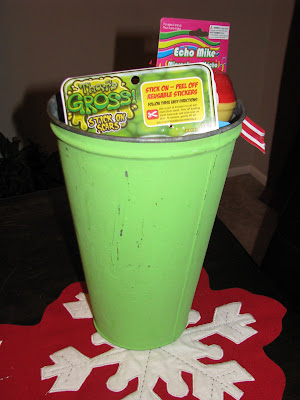 We stayed up entirely too late and then woke at 5:30am to clothe, feed and entertain this gaggle of children, all sleeping in my house. We pushed through and had a fun day.

First, to the Ernie Miller Nature Center for lunch and a walk. 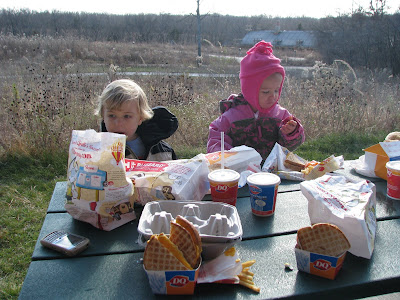 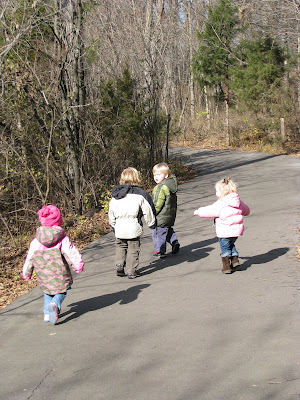 At one point, Coco tied Jack's scarf and nearly strangled him. Southerners. 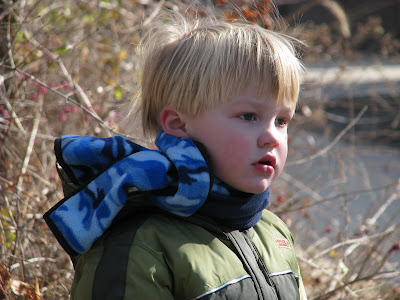 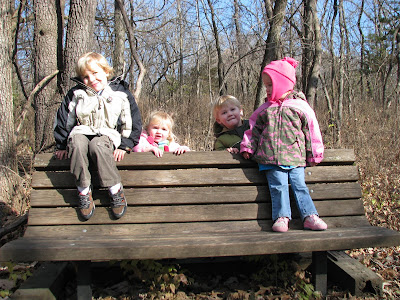 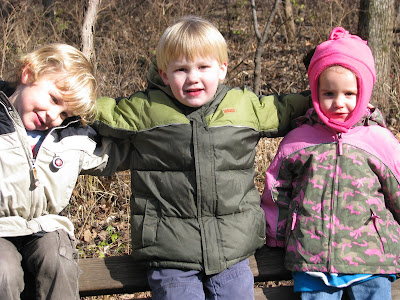 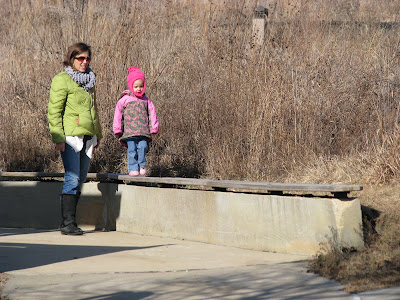 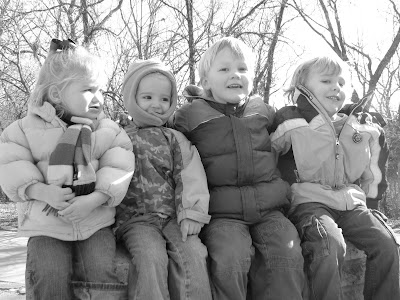 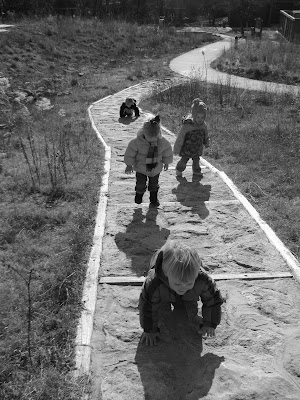 Bram barely made it. 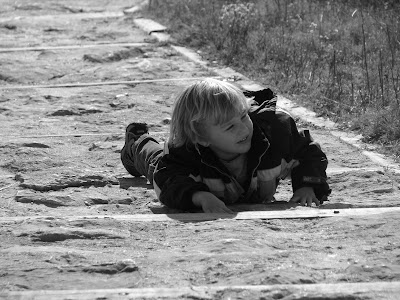 After naps and some playtime at home, we dressed the troops for a night shopping at the Plaza. 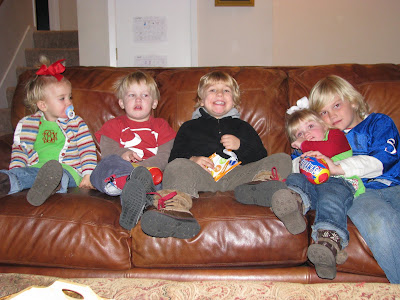 Tessie Mayes and Lainey sported the same dresses worn a year ago, here: 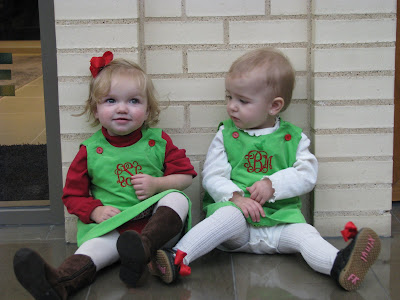 Definitely a tunic now and not a dress. Still cute. 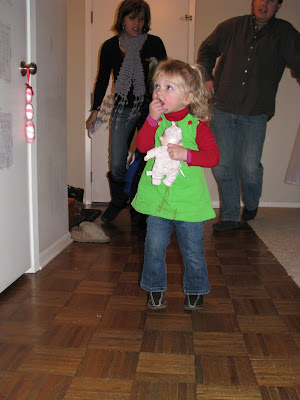 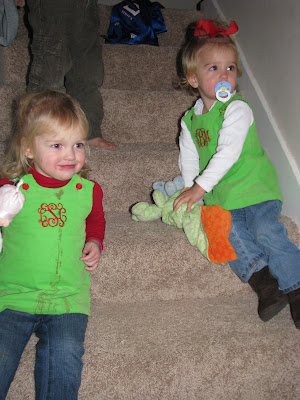 Out on the town. Love how bundled Tess is compared to our Colorado born Laine. Neither of the girls enjoyed the cold......boys didn't seem to notice. 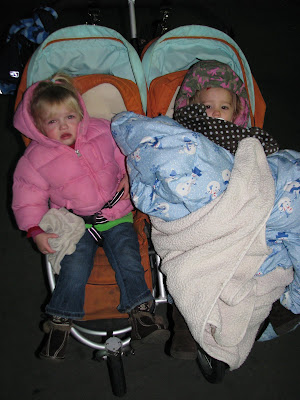 The Plaza was fabulous. Would have loved to partake in a carriage ride, but didn't think we had the funds to cover a law suit, which would have surely been the end result of our 5 on the ride.

You have to think ahead, people. 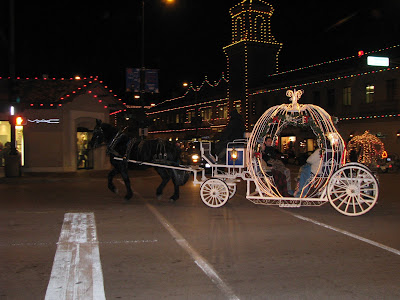 We opted for some hot chocolate and graham crackers instead. 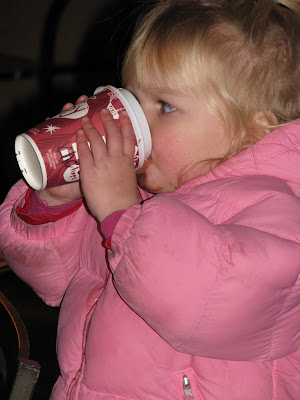 And, Jack made a train with the chairs at Starbucks. Shocker. 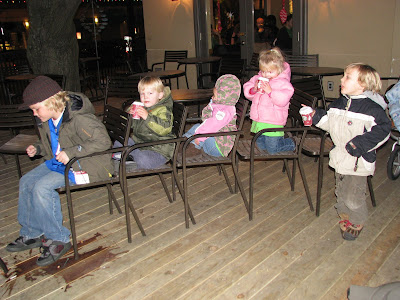 Part 2 coming soon, including a glimpse into Coco's dance routine. You don't want to miss this.

Email ThisBlogThis!Share to TwitterShare to FacebookShare to Pinterest
Labels: Coco

With 5 kids together, you have got to expect anything and everything. I love the tales of your visit!

The wine DID bust in the backseat!!! I DON'T drink white wine. So there.

No white wine Coco? what a shame :(
Looks like fun! everyone is bundled up!

With 5 kids you must prepare for anything and go with the flow. Looks like you had lots of fun.

Can not WAIT for round 2 and Coco's post! So fun!

Also dying to hear how Blake managed with 5 for 8 hours...what a man!

So glad you guys had so much fun! Coco seems like such a good girlfriend. :-) Glad you weirdos found each other.

Love the dresses to tunics! And the sweet picture from last year. Glad Tessie Mayes has hair now...whew.

And, lastly, look at Carter's sweet face before yall went to the Plaza! Loving on Laine.

Okay..... so the verdict is in... I guess Coco's not a murderer after all. Thank the Lord!

One question... in the picture of Lainey modeling her "tunic", (which is the cutest thing ever by the way)...is that Coco and Blake in the background? and what in the world are they doing?

I have been waiting for this run down! LOVE it! Looks like you all have a great time. Can't wait for part 2!

I just took a Xanax after seeing all those kids. No wonder y'all drink so much wine.

Heather - that is Coco (doing the usual chaotic shuffle to get kids dressed and out the door) and Blake is anxiously awaiting our departure, it seems.

SO wish I was there, sounds like so much fun! The kids are all precious.

And Coco, I can't wait to hear about this dance :)

i love the idea of little gifts in buckets...so cute! and dresses turned tunics--happens all the time over here. i can't bear to part with some of the cute little dresses my daughter has. recycle, recycle, recycle!

it's weird to see TM and Bram on your blog with your kids.
Sad I missed out.
How can you not drink white wine? I don't discriminate...

I drink white wine, I just wouldn't drink a gift of white wine. It gets me really tipsy really fast for some reason.

If it would of been red, I would of totally stolen it.

I wish I was there too! It sounds like the perfect weekend to me :)

So fun! I just stole your idea of the dresses to tunics. . . why didn't I think of that--you are brilliant!!!

I love it!!! So glad you guys had a great visit and can't wait for more stories. You guys are a hoot together!!!!

I love the pic of all the kids on the couch together...especially Carter. He's so sweet with his baby sister!

So much fun! I am so glad you two have a plan on how to tell us all about the craziness without missing one darn detail! I can't wait for more.

What fun! I can't wait to get Coco's side of the sorty too. How fun that you planned our your posts, genius idea!