Quite Possibly The Best Santa Picture Ever 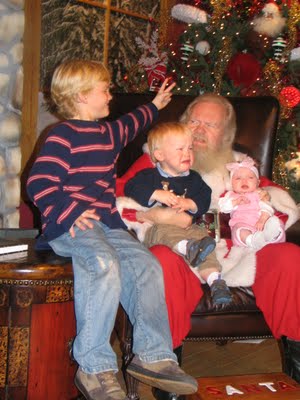 Haven't taken it yet. I know. So unlike me. But, we've been going to Northpark in Dallas for 10 seasons. We're lost this year!

I love it! I definately think that need some sort of prize!

What a hoot! Cute picture!

Love it! For a few years I had at least one crying kid with Santa per year, but nothing like that. the look on Santa's face is priceless... he is pissed! Ha ha!!!

OH MY GOSH! that really IS (and I mean it) the BEST picture ever! carter doing bunny ears, 2 babies crying, and santa looks p.o'ed! you REALLY need to send that in to Ellen and win something. cause you would!!!

What Froggity said - yes! We watch Ellen everyday and I had forgotten about that. Send it.

I love the expression on Santa's face. He's looking a little nervous and possibly a bit frightened.

We have some pictures like that from way back when. It would not be a Santa picture if someone was not crying.

I am laughing so dang hard right now! That is hilarious! I LOVE Santa's look. That picture is PRICELESS!

Hilarious!!! Love it! Santa's face cracks me up!!

Love it! I've now brought Madeline to see Santa three times, and she won't get close enough for a picture, even a crying picture. Sigh... As Santa said, "Maybe next year, Mom."

Love it!!! Santa's reaction is priceless. You should totally send this pic in to Mastercard. They could do a commercial for sure.

What a priceless picture!!! Just wait until all three of them are grown and you bring this photo out of the archives to show them. You will all have a good laugh for sure.

Love it! Did Santa forget that there were several cameras on him at this point???