We ventured down to The Plaza today to see the famed old school bunnies and shop a bit. 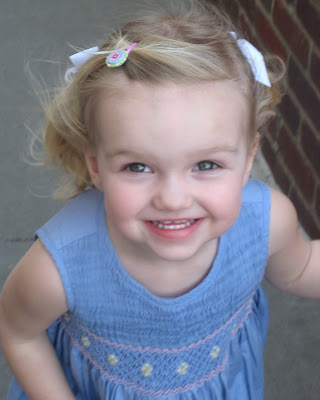 OK, before you see these next two of Carter, channel some Anthony Michael Hall from Sixteen Candles and tell me if you see the resemblance. 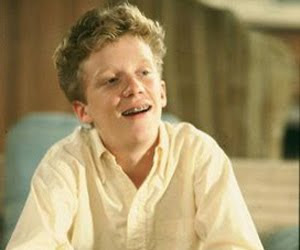 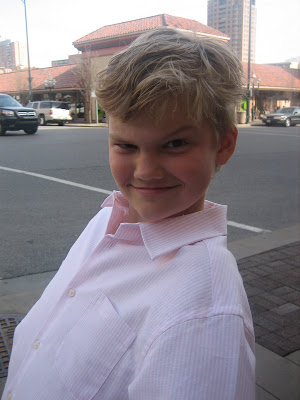 Foolish Carter. This will be blackmail one day. 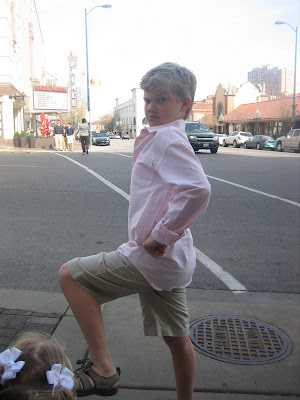 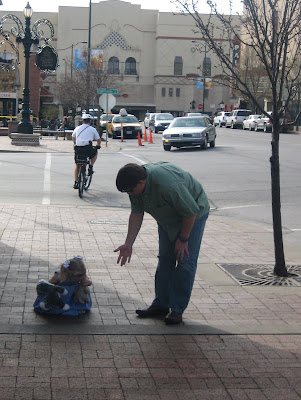 We found the bunnies and some other creatures, too. Carter tried to feed Jack to the pelican. 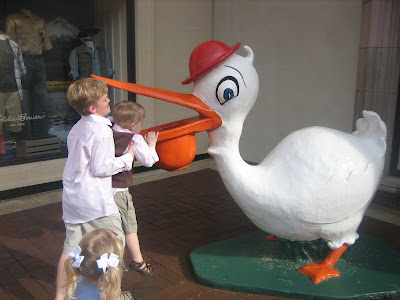 He was too big, so Blake put Lainey's lovies in there instead. It's so fun to hear a 2 year old scream. Don't you think? 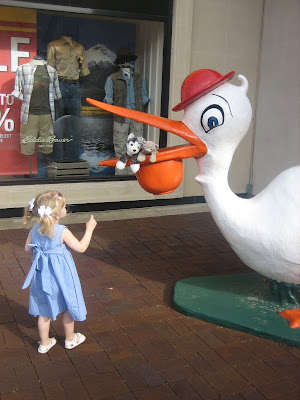 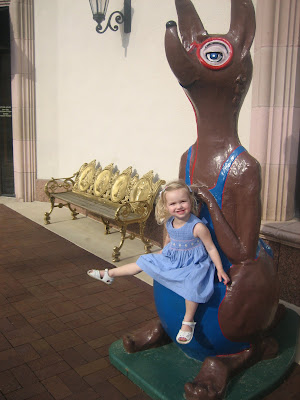 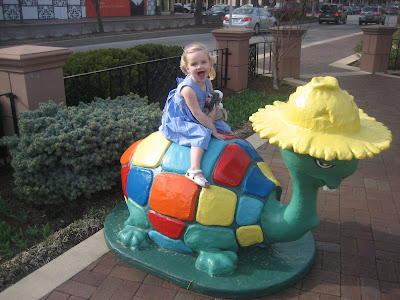 Possibly one of my all time favorite Starnes kids pictures. Everyone looks so very much like who they are here. Right down to Lainey thinking she's the center of the universe and doing a curtsy for effect. 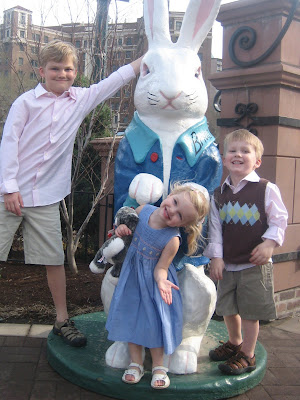 And, to put this one in perspective, look at our 3 last year at the same bunny. Jack sure has grown! The bunny's hands are on his shoulders below. Above, Jack is at his shoulders. More pics of our first visit to the plaza in 2009 here. 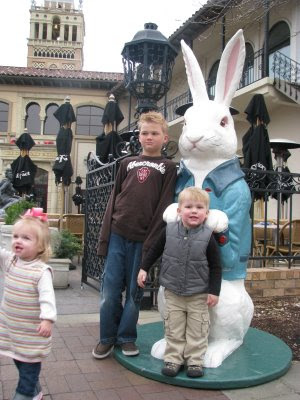 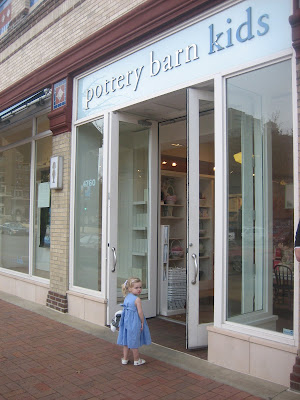 And, finally was encouraged to leave with some help. 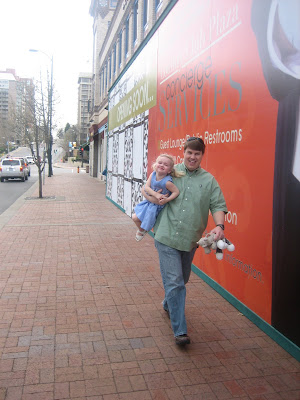 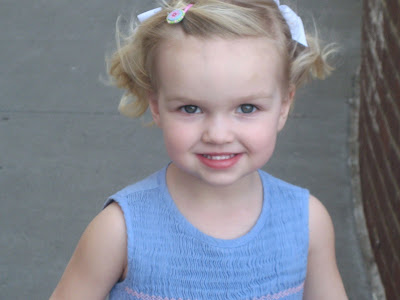 I love The Plaza because it's filled with lots of historical markers. Shopping + history in one place = true love for me. Jack? Not so much. Hence, the stomp as I was taking the picture. 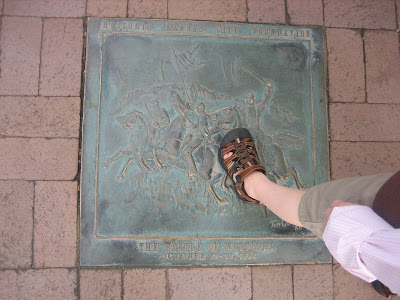 This is a dedication to greater Kansas City 3rd graders. If anyone in this family cared slightly about these types of things, I would have stayed longer to figure out why/when/how/who, etc. No time, people. The Easter Bunny was up next. 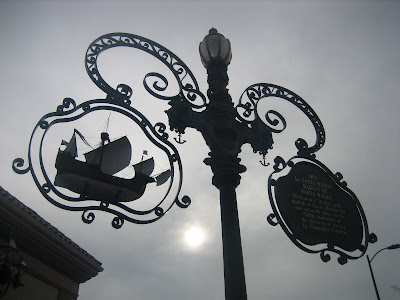 We drove out to Bass Pro Shops and entered into the land of all things redneck. Can I use that word? Is that PC? I can't stand that place. As outdoorsy as we are.......I avoid this store at all costs.

However, they were doing free 4x6 bunny photos. Score.

This picture shows about 2% of the coaxing it took for Jack to go anywhere near the bunny. I don't think the staff there completely understood what they were dealing with until Jack swatted a bag full of jelly beans out of the bunny's paw. Nice. 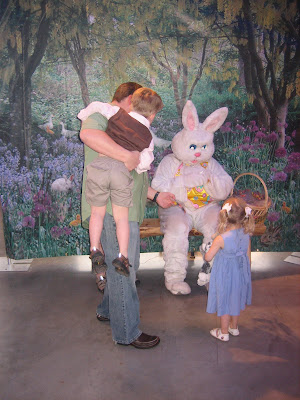 Somehow, we magically left with a few decent shots. The one they printed out for us is hilarious.......Jack is slinking out of the picture just as it's being taken. Loved it. Our scanner has been broken for about 3 years, so I'll send the pic with Blake to work to see if someone in his office has one that works. Cross your fingers. 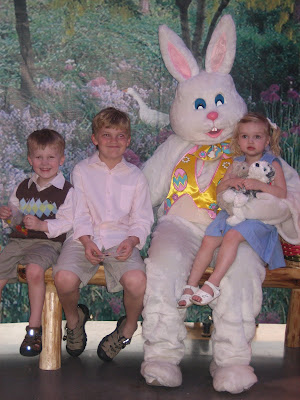 Oh, and it must be noted that Carter said, "Mom, this is a totally cheap bunny. He's wearing jogging shoes." Fabulous.

Next up? Egg dying tomorrow night.

An Egg Hunt on Saturday.

Carter looks like he is 16 in that pic...and the eyebrow raise...watch out!!!

It looks like you had a great time at The Plaza! We haven't been there in years!

Lainey has great taste in stores! I would live in a Pottery Barn Kids store if they would let me!

Hope you have a Happy Easter!

I love this post for so many reasons. Mostly because I love your babies so much.
Oh foolish Carter. You poor thing. He's so dang handsome! Blast.
OMG, did Jack seriously grow a foot?? That precious smile kills me, Jackery.
UHM Lainey can be the biggest brat EVER. That last picture of her is my inspiration for future babies. Just so you know.
Favorite part? The image of Jack smacking jelly beans out of the cheap bunny's paw. Classic.

You have got to be one of the most hilarious bloggers. Period.

Yay - so happy to see pictures of Carter! I can't believe how grown up he looks. And how funny that Trey's brothers and all of his friends have always called him Anthony Michael Hall. That was his FB profile pic for quite while.

I'm still laughing about Jack and the jellybeans. Wish I could've seen that! And Lainey, her entourage and her poses?? Love her.
Darling punks! Hope y'all have a great Easter!

You have such a beautiful family! Carter, way more handsome than AMH! Have a Happy Easter!

Lainey is looking so big! almost like a kid instead of a toddler! Cute outfits for the kids!
Redneck.. who cares..I have to say though.. shocked that you don't like Bass Pro!??WTH?

Grea Easter fun! I know for a fact that that is a totally cheap bunny because we have the same one at the Y. Have you seen my latest post? We even had to fix is "winking" eye. Glad to know it was on all of them an not just ours. Have a fabulous Easter!

Carter's comment about the cheap bunny with the running shoes reminds me of that scene in "Vacation" when they are visiting Dodge City, and Rusty says the sheriff was wearing jogging shoes, and Clark says, "Oh, they used to, Russ."

Oh, and I despise Bass Pro Shop, too. The outdoors stuff is fine, but you know me, the animal rights advocate....that is so not my store!

That's where he got it, Moni! Love it.

Great pictures! Love Lainey's smocked dress.
I can't wait to get L and TM together again, since they are now taking posing for the camera so seriously these days.

Turn that great pic of the kids into b&w and that sucker is a keeper!!!

AND we are dying eggs today as well. Lord be with me.

Looks like y'all had a blast! Those pics of Carter are too funny!!! Hope y'all have a great Easter!!!

Funny post and I too can't understand why you don't like bass pro - must be the redneck gene in my family that makes me like it! Love the bunny pics! We are dying eggs tomorrow - just got done boiling them. And yes my comment was for your woman - go pamper yourself and get your hair colored!

These are precious, Casey! What a handsome crew you have.

Love the picture of the kids with Lainey in the middle... such an awesome day!!
Have fun with your egg hunt!!

Seriously, I was I was cracking up multiple times thru this post. Love your family. Those kids are so darn cute. I would protest leaving PBK too.

Thank you for your comment on my blog..... you think that's cute... wait til you see our Ethiopian cutie...ha! jk! I haven't seen him yet, but I know he's gonna be adorable!

Awwwwwwwwwwwwwwwwww. I love your Easter post. It is wonderful. And your new blog makeover is just stunning. I love it. Nice and clean and PRETTY!

i am so glad you mentioned the dyed deviled eggs... we do the same thing!! ha!

i do not think carter can ever truly look like anthony m. hall... but those pics are truly blackmail for later... ha.

the pic of all 3 is PRECIOUS! love it. happy easter!