Question Of The Week

I think yall know by now that I would have been happy as a clam hanging out (or living) on a bus like this in the 60's. I swear, sometimes, I was born in the wrong decade. 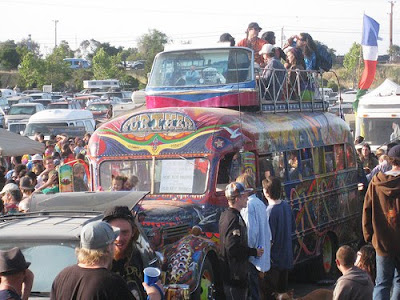 I love a live show more than just about any other event and the best I ever attended was the 2nd to last Grateful Dead set in St. Louis, 1995. I'm not even sure we were entirely invited, but our good friend, Elliott said he was going and my college BFF, Millie, and I announced we were, too. No tickets, little money, a tent to camp in, good friends and the promise of some fantastic music? Heaven for me. 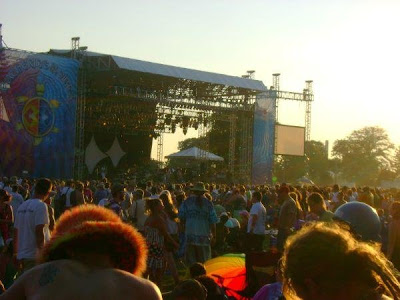 It was all that I dreamed it would be and more. I can still smell the patchouli. And, the sweaty hippies.

Somehow, we scored an extra ticket and were able to "give a miracle" to a sweet lost soul who followed the band with the enthusiasm and carefree life I secretly envied. He cried when we gave him the ticket and I'm pretty sure we did, too, after seeing his gratitude. It was all magical and by far, the best concert of my life. 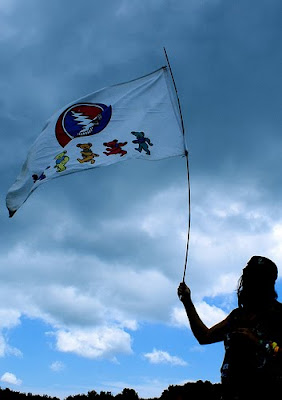 My first show? I believe that was George Michael's Faith tour. (another of my loves, though, of an entirely different genre).

***What was your first? And, favorite?

First - I think the Beach Boys or Chicago with my parents. Favorite - Garth Brooks - 1992 McKale Center Tucson, AZ - Mr. ESPN got the tickets and it was an awesome concert!

My first concert was at the Louisiana State Fair - Joan Jett and the Blackhearts.
Favorite?? Hmm.. that's hard. Always like WSP but I have to say the 2 most impressive shows I've seen are KISS and Clapton.

I think my first concert was New Kids on the Block...Awwww, Joey. I thought he was the best ever.

My favorite: Hands down the repeat Kenny Chesney concert after his original one rained out. He played for 3 hours straight. He played EVERYTHING from his present and past, as well as Steve Miller, Boston, etc. Ryan and I had such a blast that night.

First? The Beach Boys at Six Flags with my mom. And then it was Michael Jackson. And then U2 - Joshua Tree tour. Awesome show!!

Favorite? Either Widespread at the Warfield in San Francisco OR Elton John/Billy Joel together.

You'll die when I tell you this, but I still have my UNUSED Grateful Dead ticket for their 1995 Vegas show. I was supposed to go and then had to back out at the last minute. So sad.

My first was Allman Brothers in 1975! Yikes I'm old. My favorite is always Rod Stewart. Always a good show!

First - Michael Jackso
Favorit - Blink 182 this past fall...I am in love with Travis Barker...you know the drummer with the mohawk...tatooed from head to toe...could not be more opposite from the love of my life?! Where is THAT pregnancy dream when I need it!

I haven't been to many concerts... not sure why. It isn't on purpose- I haven't been avoiding them.
But my first was with my mom, dad, and sister. We saw Billy Joel and Elton John when I was a kid. I loved it. It was amazing... I think the best was Death Cab for Cutie... front row. It was overwhelming and amazing.

my very first...i think i remember was dolly parton, totally forced to go by my parents. how scary is that? my fave though, i am in love with JBJ (bon jovi). I am not a big concert goer, but i must say i have seen him several times, and twice while prego. christian was not blessed with a concert in utero, darnt he luck.

I think my first concert was New Kids on the Block at the Nebraska State Fair.

As far as my favorite that is tough. Probably either Bon Jovi or Keith Urban.

I think I saw the Beach Boys as a child with my parents.....so I do believe that was my first. Scratch my original statement. How funny that so many of yall had the same one!

First...Madonna at Houston Summitt...favorite Clifford Ball, Platsburgh NY for Phish and Casey you were supposed to go! Probably 1996, not sure. Loved it. Oh, also Allman Brothers and WSP at The Backyard around 1999. Got in for free with no ticket because I knew the doorman :). No! I've changed it! WSP in New Orleans at Tipintinos with Casey and most likely Millie or Shawn not sure what year or anything...Good ol' LSU!

sorry for all the mispellings...in a hurry :)

Favorite- Okay, so I have been to a lot, but I loved the Casting Crowns concert. It was just a really fabulous show.

First: 311 in '96 it was the summer before my freshman year of highschool. I loved 311, and actually saw them several other times.

Favorite: I think Jack Johnson three weeks after Fiona was born. It was my first time away from her but she was just starting to get colicky so it was a nice break. JR and I got to dance to our wedding dance live, a lot of fun. It also meant a lot because I learned that Fiona survived without us (you know how that's hard to grasp at first?).

sadly, i have only been to two (yes, two) concerts in my thirty years. nope--three. the first was lillith fair in 1997, the second was Maxwell in 2002, and the third was Madonna in 2004ish. The best was Maxwell. The husband and I went--it was perfect.

BTW - Whatever happened to Millie?

First - Beach Boys and the Temptations. Favorite - Probably when Dad would come to College Station and go to Robert Earl Keen with me. Good memories.

Good question, Casey!
My first concert was Neil Diamond. The first concert of MY choosing was The Go-Gos in about 7th grade. I'm sure I had my hair big and my jeans tucked & rolled!
Favorites....that is so hard to choose. My last Dead show was in Memphis with a now departed friend of mine. That would be up there...So would seeing Clapton at Sandstone the night after SRV died, Phish at RedRocks, and the Dead with Sting opening in Vegas. Pink Floyd was incredible live. The Police on their last tour would be way up there for me, too! Can I choose them all???

Amy, yes, you can! Great list.....jealous! Red Rocks is fabulous.

Loving all the answers!

I guess my first concert was either Oakridge Boys or Kenny Rodgers with my parents, but MY first concert was Madonna, Who's That Girl. My dad won the tickets for me on the radio. Next was U2 and my uncle got a limo and let me invite 3 friends. Awesome. I don't go to many concerts so any that I have been to have been really great including Laurie Berkner with Missy Mack, but I guess my favorite was Paul Simon and Bob Dylan just after Mr. Mack and I married.

My favorite was probably Lenny Kravitz or Chris Isaak at the Backyard in Austin about 4 years ago. We got to meet Chris after the concert and he was so nice.

Dare I comment?
Seriously, you guys have all the good stuff. Beach Boys? Grateful Dead? Michael Jackson? NKOTB? Madonna? Bon Jovi? UGHHHH I'm so annoyed and jealous right now. Especially since I missed MJ before he died and Madonna before she got veiny and weird.
1st concert: N'SYNC. (I know)
Best: Citizen Cope.

New Kids on The Block was my first. Oh how I loved Joey! And Jordan too:)

Favorite is going to be the Cranberries concert. My closest five girlfriends from elementary school thru high school went right before we graduated and had a blast. We used to drive around listening to them so the music was so "us" that year!


Another favorite was the Dave concert. A friend gave us tickets as a wedding gift. Unfortunately it was in mid-August in Dallas and we hadn't had enough to drink to enjoy the concert in that heat :)

It was really fun to read the other comments on this one. First was Kenny Rogers, still love him. My favorite was the NKOTB reunion tour. Great question!

first concert: U2 Tarrant County Convention Center
great moments:
String Cheese at Paladium in Dallas with a special guest appearance by Warren Haynes and Matt Abts (Woody the Mule bassist had recently passed) they came out on stage and played a 19 minute "I shall be released". It was religious experience and you could feel the burden being lifted off of these guys.

first? hmmm.... can't even remember... probably would be embarrassed to say!

but my favorite was steely dan, jazz fest '07. or heart, nyc '04. we just happened upon them at the beacon. i want to BE nancy wilson. that girl is a rocker.

First: Debbie Gibson. I even had the Electric Blue (or Youth?) perfume in the 4th grade. I was so cool. ;)

Favorite: Either U2 or Depeche Mode.