I Hope He Has A Sense Of Humor

Staying home with kids during the day has engraved in me an ability to hear noises outside the house and without even thinking about them, know whether it's business as usual or something else.

For example, the trash guys...while erratic in their arrival, I can hear them coming and make a mad dash for the garage if we've forgotten to prepare for pick up the night before. The mail man can be heard, Fed Ex, etc.

Yesterday, while playing with Jack and feeding Lainey, I heard the UPS guy drive up....the distinct sound of his truck informed me of exactly who it was. These guys are fast, so it's usually a 20 second stop at the most...I hear the doorbell...and they're on their way. I noticed that he took more time than usual and didn't ring the doorbell, causing me to wonder what changed his routine.

Since I was expecting a package from New Orleans for our Mardi Gras party next week, I anxiously ran to the front door to make sure he did leave something for us, only to find this: 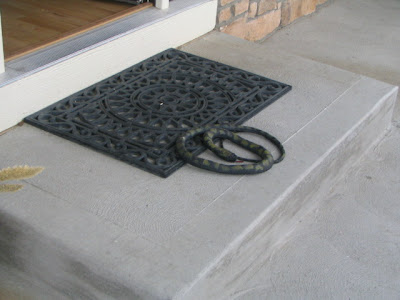 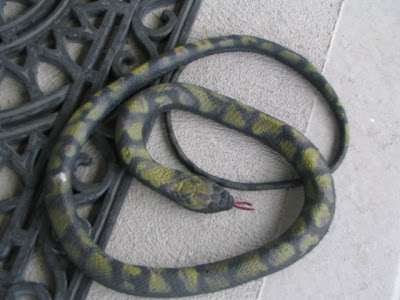 It's fake, of course...one of the two rubber snakes we own and inherited from my parents years ago after their attempts at chasing off birds or some varmant failed....and the boys play with them now. Little did I know they were this clever. And, by "they", I mean "Carter", of course.

We have a large front porch, so upon walking up, I'm sure this snake looked real. It wouldn't be unheard of to see such a thing where we live, too. Just hoping he returns for our next package drop off.

Next time get this on America's Funniest Home Videos. You and the UPS guy can share the 10k!