Carter is a fan of the muscle shirt. We bought him one from Abercrombie at age 3 and he wore it until I removed it from his closet 3 years later. Since then, he's asked about it and I've suggested we lost it in the move, it's in the summer clothes boxes, Batman took it....anything to avoid him putting it on.

On a whim recently, I bought him one for $3 from Target. I don't think I could have pleased him more. He put it on and refused to take it off until we insisted. One morning Blake suggested he change his shirt and his immediate rebuttal was (screeching), "Mom said I could wear it even if it's dirty!" Blake caved, fearing he might spontaneously implode if he made him do it.

So, in order to avoid his wearing the same original shirt, I took him to Target to buy every other color that existed in their complex pallate. Red, white, blue, black and grey now adorn his closet and I don't think I could have spent $15 more wisely. He is so happy and although I would love for his taste to veer in other directions, these are what he has chosen. Don't expect to see any pictures this summer to include anything but one of the five.

Who knows? Maybe Carter is bringing the statement back. 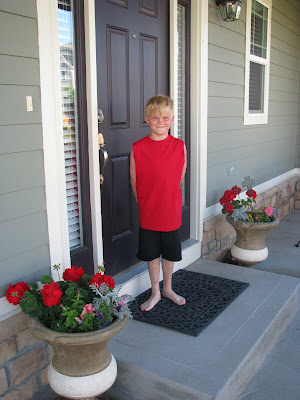