Lots of excitement here last night. Upon Blake leaving for the airport, he went out to his car to find a huge snake under it. 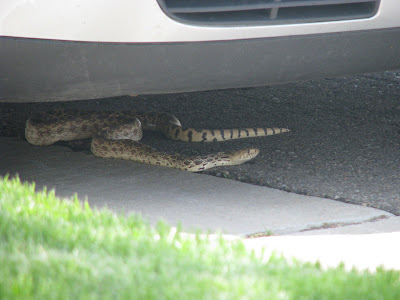 He came in to get Jack and me to check it out. Carter was at the pool and missed it all, unfortunately. 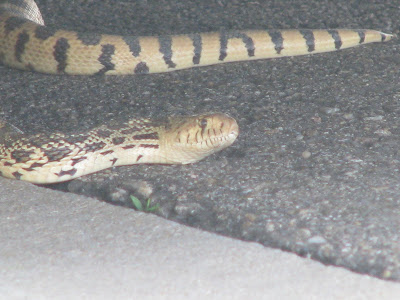 The field pictured below is next to us, at the end of the street. Because of that, I'm actually surprised that we don't see more here.

Although I don't care for the snakes or mice or coyotes that occupy this land, I do love that Carter has it and eventually the little ones, too. We always grew up having some creek around to play in, fish for crawfish, make dams in, etc. Some of my best memories are of being down by the creek with my brothers doing such things. I love that our kids have that, too.

Of course, houses will be built here eventually, but until then, the kids can enjoy the open space. 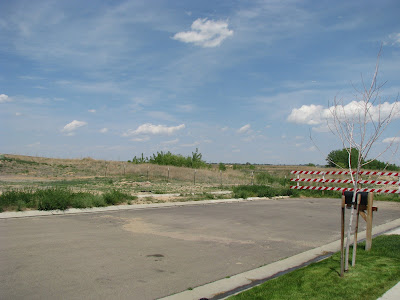 Jack finally saw the snake and started hissing at it. Now, he's the type of kid that would walk right up to it and pick it up, so I was adament about keeping him back. Blake sees this and says, "Don't worry. It's just a bull snake. It won't hurt him."

How do men instinctively know this? How do they see a snake and automatically know what type it is and if it's harmless or not? 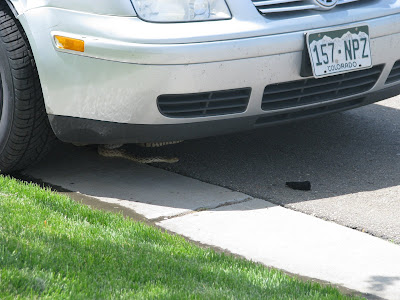 It started to move while Blake loaded his suit case. This part really grossed me out....it slithering through the hubcap! 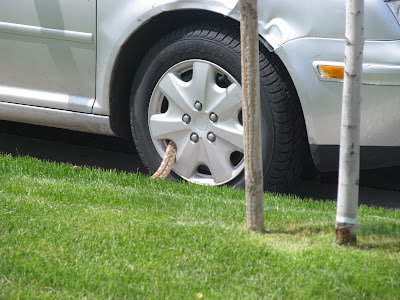 I was a bit hysterical at this point because Jack wanted to get closer and I couldn't hold him back and take pictures. They're not very good....but this one shows how long it was! 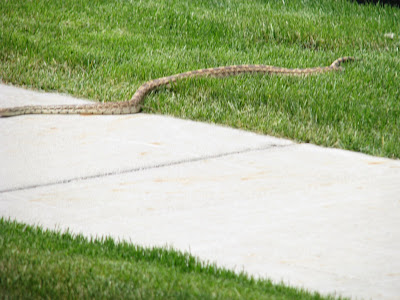 And, this one shows him moving towards the house! 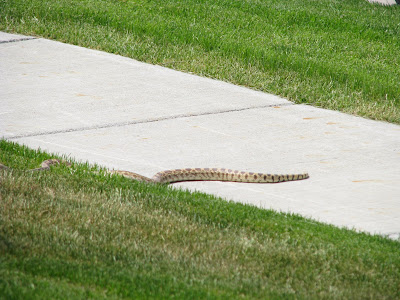 I took Jack in at this point. Blake got out the gardening tools to take care of the situation. My hero. 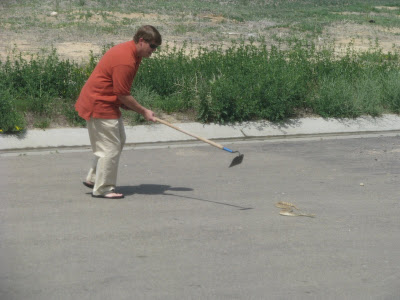 The snake was removed from the street eventually and his remains were thrown into the field for Carter to search for this morning. I didn't want him to find him, invisioning his returning to the house with a snake carcass around his neck. Because that would SO happen with Carter. Finally, after 30 minutes of searching and his begging me for clues, I told him what direction he was in. After finding him, he returned to the house begging me to let him touch him. He's been outside all day looking at the snake, bringing friends by to see the excitement, and all the while bragging, "My dad is so cool to kill a snake." Indeed.

Now, I'm waiting for all of his snake friends to show up and retaliate. I can't go into the garage without looking under my car, under the lawn equipment, near the tool bench. What a lovely summer this should be! 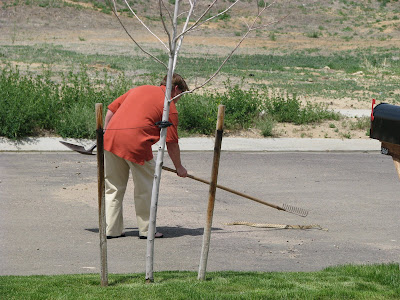 I am so freaked out just looking at that snake...especially the one with it going in the hubcap! Man...the chills I have right now is rediculous!

gross, I am never coming to your house again and if I do you will have to carry me to the car!

I hear the neighboorhood snake retaliation is hell. Good luck!

And, why do I feel like this should have been a scene out of The Burbs? Blake in his polo and khakis with the garden hoe cracks me up!

Way to go Blake! You just earned 50 bonus points with your wife!