Time to surf! My Aunt Donna, Uncle Bob and kids came in for the day to visit and go to the beach. So glad they did! I failed to catch a pic of precious Erin, but got the rest of the fam on film.

First, Carter and Bob head out to sea. Carter had not surfed since Hawaii in 2004, where Bob basically took him out on the board and surfed with him. It was very cool! So, really, this was his first time to do it on his own. 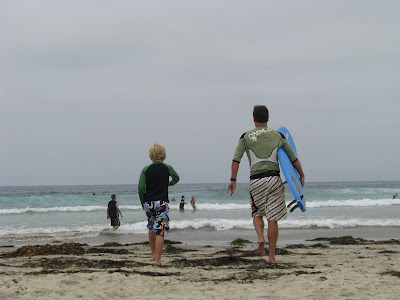 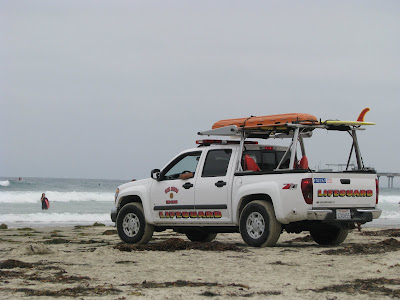 Cam and Jack. Sweet Jack was so interested in Cam. Older cousins are always fascinating. 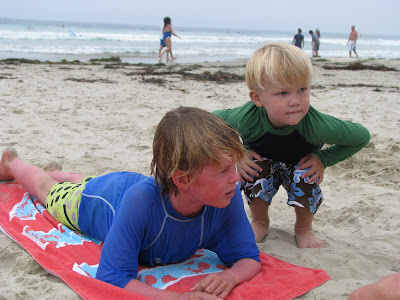 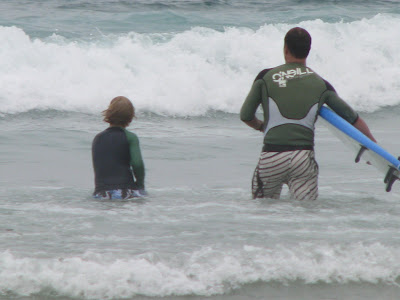 Lots of direction from Bob. No better person to learn from. He's a pro and surfs all over the world! 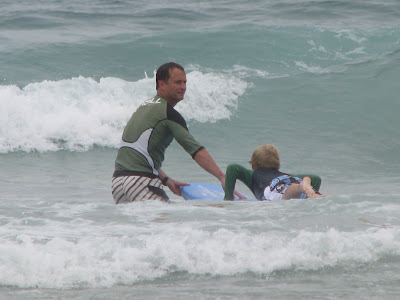 Look at our baby go. 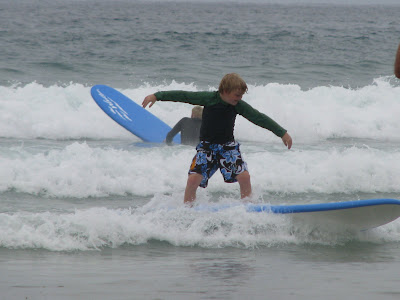 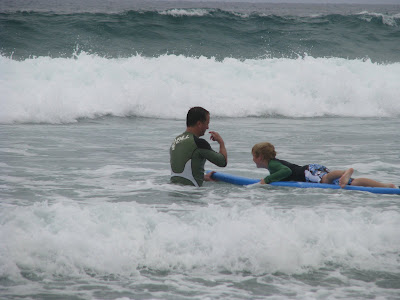 Jack stayed busy on the beach. 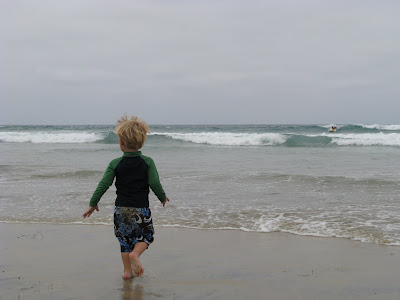 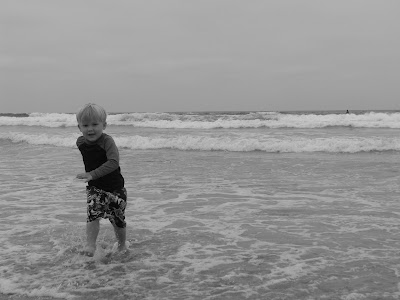 Carter really took to it well. By the end of the first day, he was paddling out and got up all by himself. 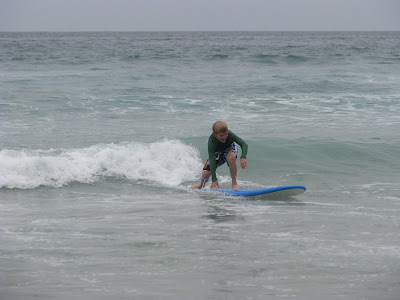 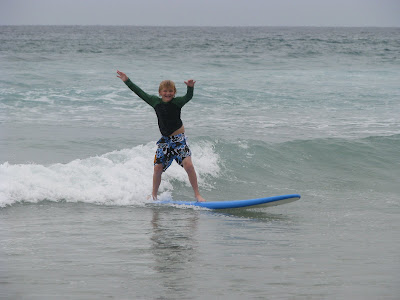 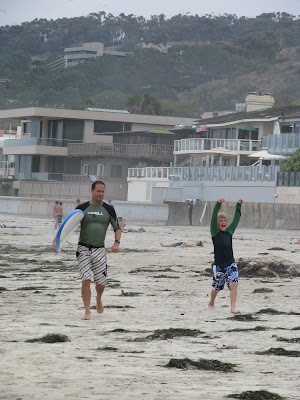 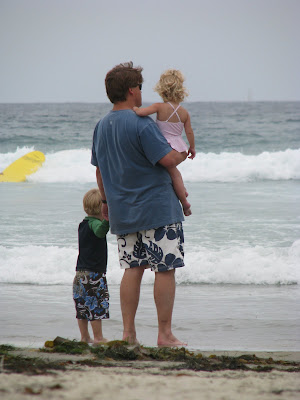 In a sand pit. Messy, messy.....we'll have sand in our house for weeks once we unpack. Totally worth it. 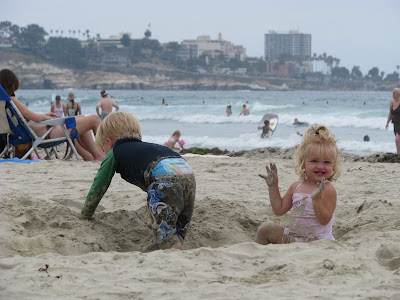 Lovely La Jolla Shores Beach. Perfect for kids to surf....voted one of the best family beaches in the U.S. 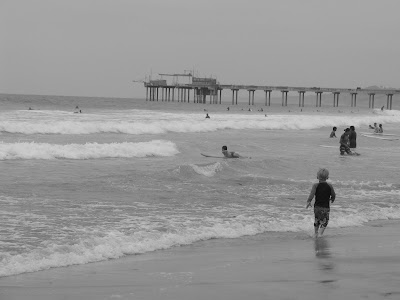 Jack and Lainey do not care for sea weed. 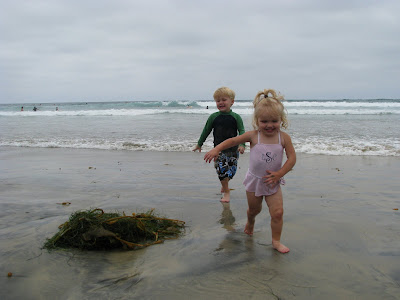 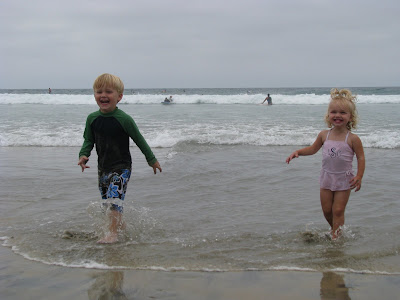 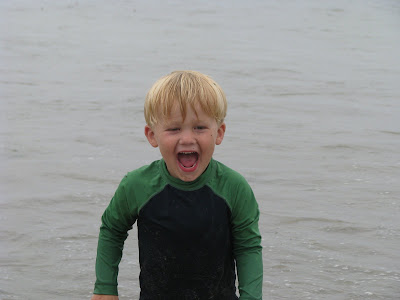 Caroline with the little ones. Aunt Donna introduced a very simple game.....she didn't even know it would be a game, actually.....get your hands dirty and then wash them off in the shallow water. Brilliant! 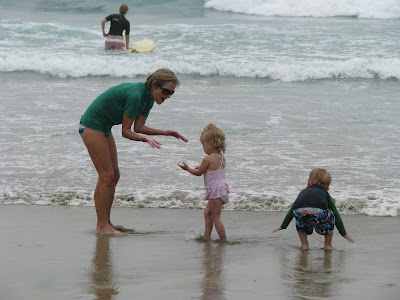 Jack running out to hug Carter after a successful surf. 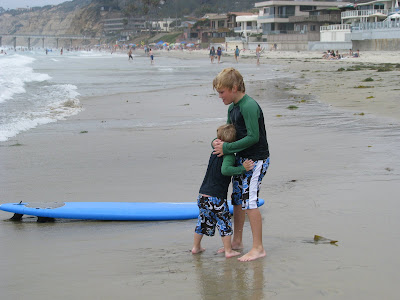 More time on the board. 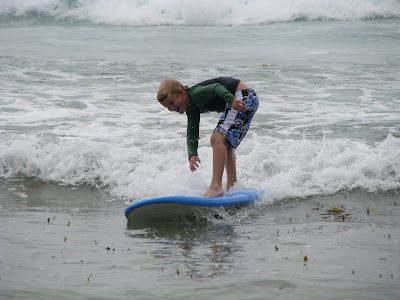 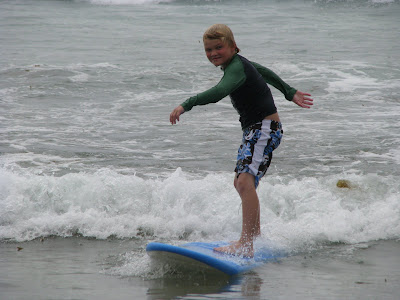 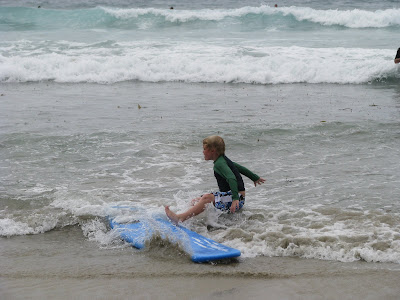 Surfing into the beach:

And, nearly surfing over his new friend:

Carter is such a STUD! Good for him!

I have never seen a monogrammed swimsuit before! Who Knew???

Heather - thanks! I'll tell Carter. Suit was copied from Kelly's Kids. I found one I loved and it was about $70 after monogram, so I bought a cheap $10 suit from Target and had it monogrammed similarly in town. That part of the material cannot stretch, so I was told to buy a size bigger. Worked just fine! Check out their site for more ideas. Precious. You could do even better with your talents!

I was thinking the same thing about the swimsuit. Too cute! Love the beach pix!

That is so cool that Carter got to surf. I am excited that he got to do that. Looks like so much fun!

WOW Carter! You go! SO impressed and he did it so quickly! Lvoe the expressions on LC & Jack's faces...pure joy!

oh my gosh about the swimsuit! so cute!

So Payton says "man, Carter can do anything!" We aren't an athletic family so I am impressed by Carter's mad skillz.

I'm SO jealous...that beach and those waves looks like so much fun! Great pics!

These are my FAVORITE pics! Look at what a natural Carter is. . . and according to my husband, surfing is not the easiest of sports to master. He looks like a California kid--I think it is time to re-load the moving truck and head out west!!!!

He looks like he has been doing it for years!! Way to go Carter!!

Carter, you look like you belong in California! Way to go, buddy! We love you all!

Way to go, Carter! I can't believe you surfed that well. It seems like you've been surfing for years!!!

Way to go, Carter! I can't believe you surfed that well. It seems like you've been surfing for years!!!