Is it Wednesday? I think it's Wednesday. When you're unemployed, all the days run together. We have no schedule here. School's out. Blake's diligently looking for jobs and taking kids to the pool on his breaks. I'm working as much as possible.

OK, not today. I'm home with a stomach bug. Blake originally blamed it on my usual over-consumption of buttered popcorn during my movie last night, but that is not true. The indie theaters do not have self-serve butter. It's a shame. Maybe my body was actually in shock due to the relatively normal ratio of popcorn to butter? We'll never know.

Anyway, I toughed it out this morning by meeting an old high school friend for a playdate, but left about an hour in. A hot summer day in Kansas outside is no mix for stomach irritation. I called work, had someone cover my shift for this evening, and am now miraculously home alone. Seems like I'm never in my house alone. Blake has the punks out to dinner at McDonald's Had A Farm And There Was A Cow There (Lainey's name). Trying to wear them out after late naps. It's a delicate formula to keep up with to ensure no one shorter than 5 feet tall is up after 8:30pm in this house. Hard to do with the late summer sun.

This is not Batman. It's Bizarro Batman. Months ago, Blake saw a black cat outside, huffed and puffed a bit to himself for having to rescue him back into the house, and then walked in with the wrong cat. Batman was sitting near the window and looked at him like, "What's up, Dad? Who is your friend?" 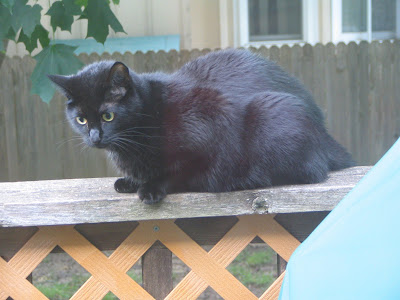 So, Bizarro Batman has had a few phantom sightings here and there, but showed up on our balcony on Tuesday. It was quite a stare down. 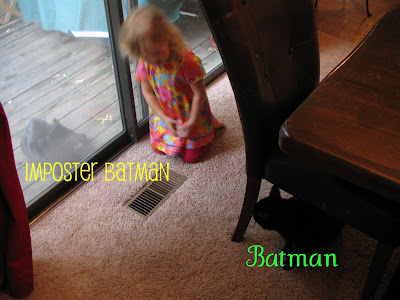 For about 20 minutes, we heard manic labor-like cat groans and lots of squeals from Lainey. Then, he sauntered off towards the fence. Giggling to himself, I'm assuming. 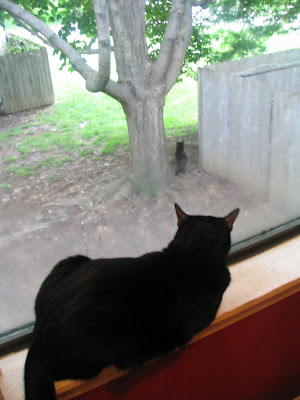 Lainey momentarily lost interest and returned to her cereal. 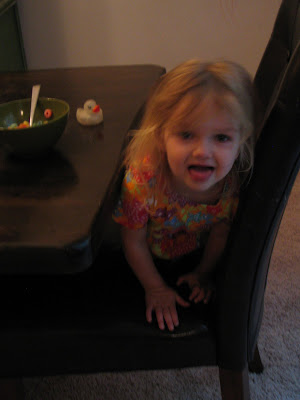 I stayed close to watch the drama. Look at Bizarro Batman taunting the real Batman. Shameful. 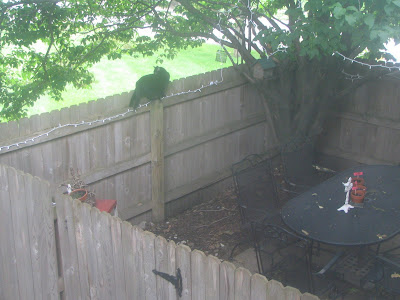 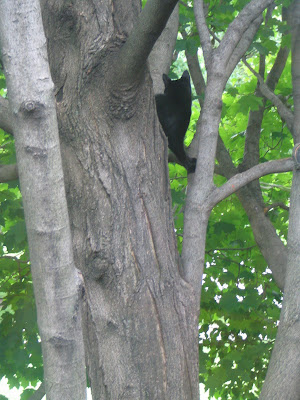 Lainey tried to console the real deal with a stuffed dinosaur. 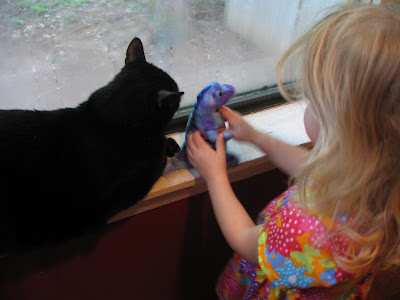 And, then tried to flat iron his fur. Nothing worked. 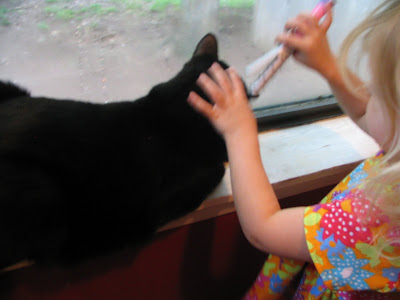 It was a rough day for the family pet. 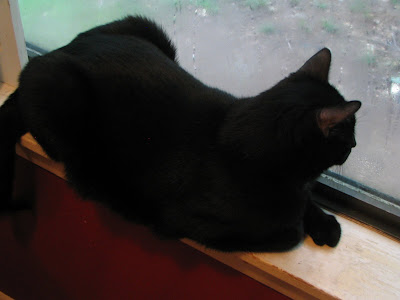 We went to our first summer concert last week. Kansas City has many varieties.....this one was Jazz in the Woods. Loved it. 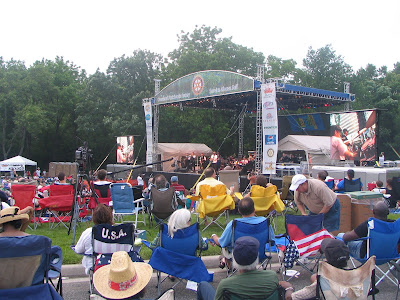 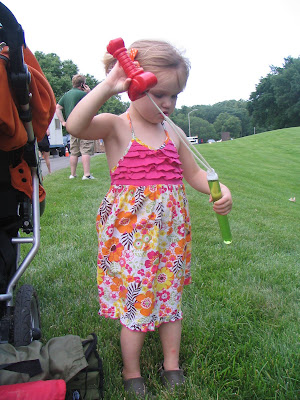 Jack saw the hill and immediately started running towards it to roll down. Punkin. 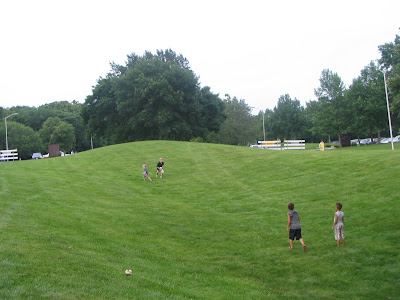 Blake did Lainey's hair since I was at work just before we went. He does well dressing the kids and always putting them in clothes he knows I will like......so I was not surprised. But, really loved how much effort he put into her hair. Cute. 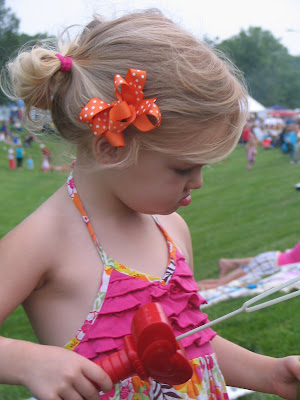 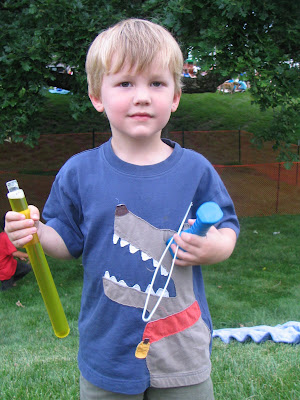 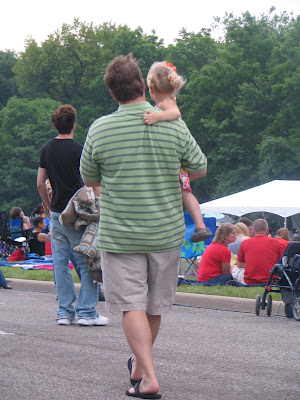 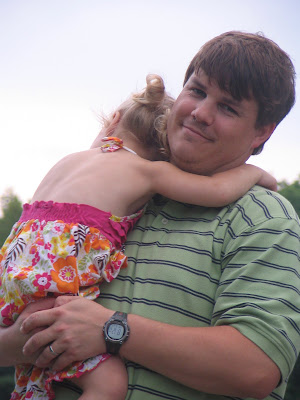 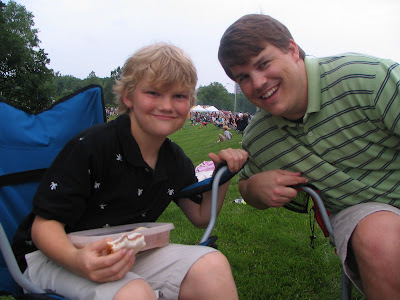 Lainey has been calling me her "sister" for about a week now. Not sure why. This was a "sister pic". 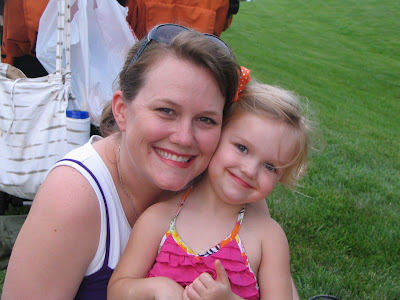 And, this is about how the little ones looked all night. Such a mess. So much fun. 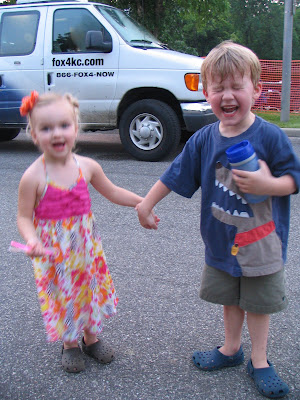 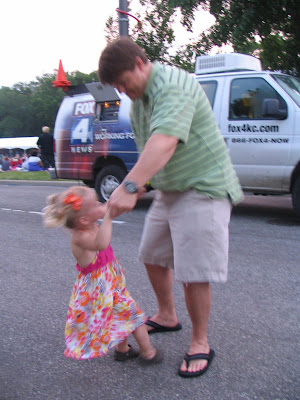 That whirl is Meow Meow. 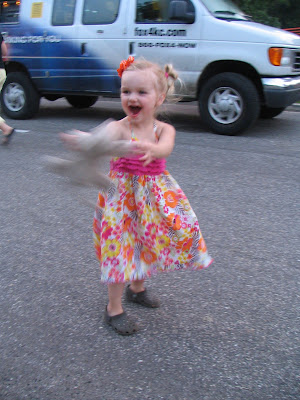 Who is THIS kid? I swear, every day he grows more. I tried to bust him taking a drink from Lainey's sippy cup and instead feel like I ended up with a shot of a 13 year old boy! 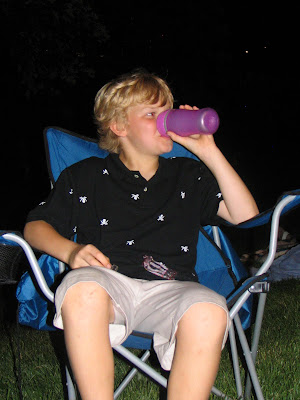 A video from the night. I suggest you leave the sound on "mute" and instead read the caption here: "Carter was given money to go buy food to share and this is what he returned with." There. I saved you the sound of my voice, not unlike fingernails on a chalkboard. Either way, is Carter headed to a rave soon, or what?

***note - Just showed this to Blake and asked, "Is that really my voice? Good Lord!" His reply, "Yeah. You should try talking less."

Things got a little out of hand. 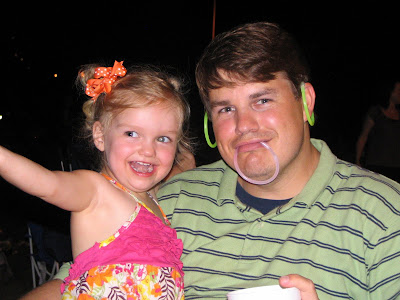 And, Lainey wanted to pose for more pictures. Business as usual. 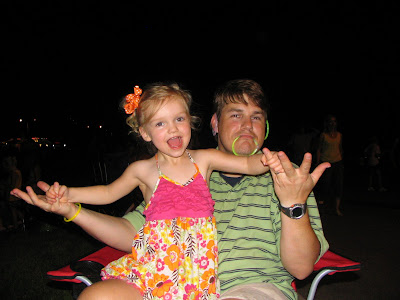 On our way out, the little ones turned into groupies and hung with some band members. Carter got some autographs. We know how to party. 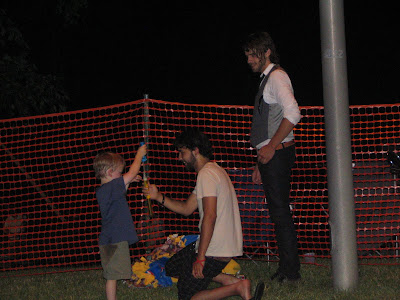 And, that should do it! Hope yall are having a good week.

Ok, so I just told Ryan about Bizzarro Batman and he went off that Bizzarro Batman has to be white because Bizzarro means opposite. Then he proceeded to ask me if I'm familiar with the story line, and I stopped listening. He may still be talking about the comic book.

My only knowledge of "bizarro" characters comes from Seinfeld. Don't recall them being opposites....just people in alternate worlds. Like Bizarro Batman.

"No, everything in the bizarro world is opposite of the real world," so says the expert. Yawn...

Love the pic of you and your sis!

and he's still talking about it...

Jack's shoes are on the wrong feet.

Bizarro Batman is too funny!

The concert in the park looks like so much fun! Love the pictures, especially the one of you gals!

The pic of Lainey resting on Blake's shoulder is priceless AND the "sister" picture is too! I love it. :) Lainey's dress is too cute.

swear the exact same thing happened to me as a kid, we had a black cat named midnight. one day we had a midnight imposter in our house. looked just alike except the fake had a bobbed tail. scary!!! love the hair that blake does. he should go into business. see this could all work out. and love the crocs on the wrong feet. EVERY kid does it, what is it??

Corporate Woods? We almost went, but stopped at the last minute because Rob was finally organizing our garage and I didn't dare stop him once he got motivated.

fun stuff. Seriously, Carter is a man! LC precious as always and Jack is growing so much too. You and LC do look a like!

Lol...I hate my recorded voice. It's terrible. I think we all hate our own. I thought you sounded fine. Wanna trade?

My kitty, Aria, will sit in my bedroom window which draws in the crows. They will sit on the fence right near the window and caw very loudly as long as she is sitting there. Animals don't seem to care about your sleeping schedule either!

Never a dull moment, I love it. Mr. Jack is looking grown up too just like his big bor and Lainey is cute at always trying to use the flat iron on the cat :)!

The cat thing is hysterical. Isn't it funny just how long Mickey D's has been around? I remember when I was a kid wanting to go there for breakfast on Sat.mornings when I saw the commercials during cartoons!

Things I'm laughing about because of this awesome scoop:
Bizarro Batman (and Ryan's comments....sounds like another man I know...)
Blake chasing down a random cat and bringing it into your house.
Lainey's consoling Bahman.
Lainey's name for McDonald's.
Your sweaty punks. (Jack keeps looking older. Maybe because his hair is growing out?)
Blake's glow stick masterpiece.
Carter's raver mouth thing.
You talking less.

Love your family! I miss you guys! Did you look at those dates yet? I'm going nuts over here.

Such great pictures....love the one of you and Lainey. Carter DOES look like a pre-teen. Dane has the same shirt as Jack. Oh--and Blake did a great job on Lainey's hair...love that there is a bow in addition to pig-tails!

Caroline's comments about Ryan are cracking me up!
I had to go back and look to make sure Jack's shoes were on the wrong feet. They were! Love that boy.
Carter definitely looks like a 13 year old. Except he probably would've come back with a beer instead of a mouth glowy thingamajigger if that was the case. At least that's what I would've done at 13. Well, maybe 14.

LC and her sister look precious in that picture. And I love Blake's earrings and lip ring. Fits him well. He and Carter could go to a rave together.

Black cats are crazy anyway! We have a black cat named Noel who looks just like Batman. We have a "fake" Noel accross the street. In fact, we have about 4 "fake" Noels in our neighborhood. I had no idea until I had to go looking for our Noel one day. Our neighborhood is swarming with black cats...crazy!

I loved this post. SO funny. I can't believe Batman has a stalker. Y'all should look into putting a restraining order on that bastard.

We have the faux flat iron and curling iron as well. Our animals LOVE it when TM busts those puppies out. For real.

I loved this post. SO funny. I can't believe Batman has a stalker. Y'all should look into putting a restraining order on that bastard.

We have the faux flat iron and curling iron as well. Our animals LOVE it when TM busts those puppies out. For real.

Poor Batman! Hope the fake one doesn't visit often.
Carter does look like a teenager! He's so tall! Jack is growing so much, too, though!
Love the pic of you and LC. So precious, you sisters!

Oh my gosh, that is the cutest that your daughter calls you her sister! Are you sure you didn't teach her that? And, by the way, I loved hearing your voice again after so many years! I haven't checked your blog in awhile. I forgot how entertaining your family (especially through your eyes) can be. I'm happily hooked again. The changes are great, too. Multiple pages... a countdown ticker thingy... sweet links... fancy, fancy!

Blake is awesome. A hairbow and everything.

Carter is growing up. Fast. WHy do they do that?

You know, that's how it always starts. Fake batman just shows up at your home one day, the next day? Gotham's aflame.

And Jazz in the Park sounds awesome - especially with your group. I mean, bubble and light-up bracelets?