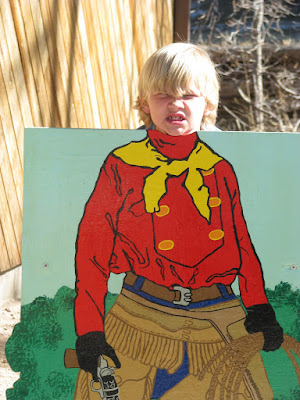 Our first born is receiving his second Catholic sacrament tonight. It's a big event.

Carter has been studying for the past few years for what will soon amount to almost a third of his lifelong Catholic milestones. This evening, his First Penance (we called it confession) and in a few weeks, his First Communion. It's hard for me to believe that we have a child old enough to do such because it seems not that long ago I was making these steps.

Tonight, he will sit down with the priest......or kneel behind the screen like you've likely seen in movies if you're not Catholic.....and confess his sins. He's been a real challenge lately, so I'm inclined to send a list with him in case he loses focus, but I won't. After confession, he'll receive a penance (usually 5 Hail Marys or 10 Our Fathers or the like).....he'll say his Act of Contrition......and then, as he says, will be "washed free from his sins."

I've explained to him that admitting such things to a priest does not "free him" from his current grounding or his loss of privileges. But, it's a start.

So, say some prayers for our little Catholic in training. Caroline and I are still trying to figure out an appropriate way of bribing the priest to find out what he says. Kidding! (unless you can think of a non-sacrilegious bribe)

that is WONDERFUL! congrats! :) don't they grow up too fast?

That is so great. I know how proud you and Blake are of him.

I think listening to confessions is one main reason priests like their jobs. How fun!

Was that sacreligious to say?

enjoy this rite of passage. congrats to carter.

And for me it was called First Reconciliation.
I hated going to penance. I think we had it once a year at school. I could never think of stuff on the spot to say. So I always said stuff like I disobeyed my parents and hit or was mean to my sister.

Awww...what a proud momma you must be!! Congrats to him!

What an amazing step, I know you are so proud! Surely the priest could just drop some hints to you?